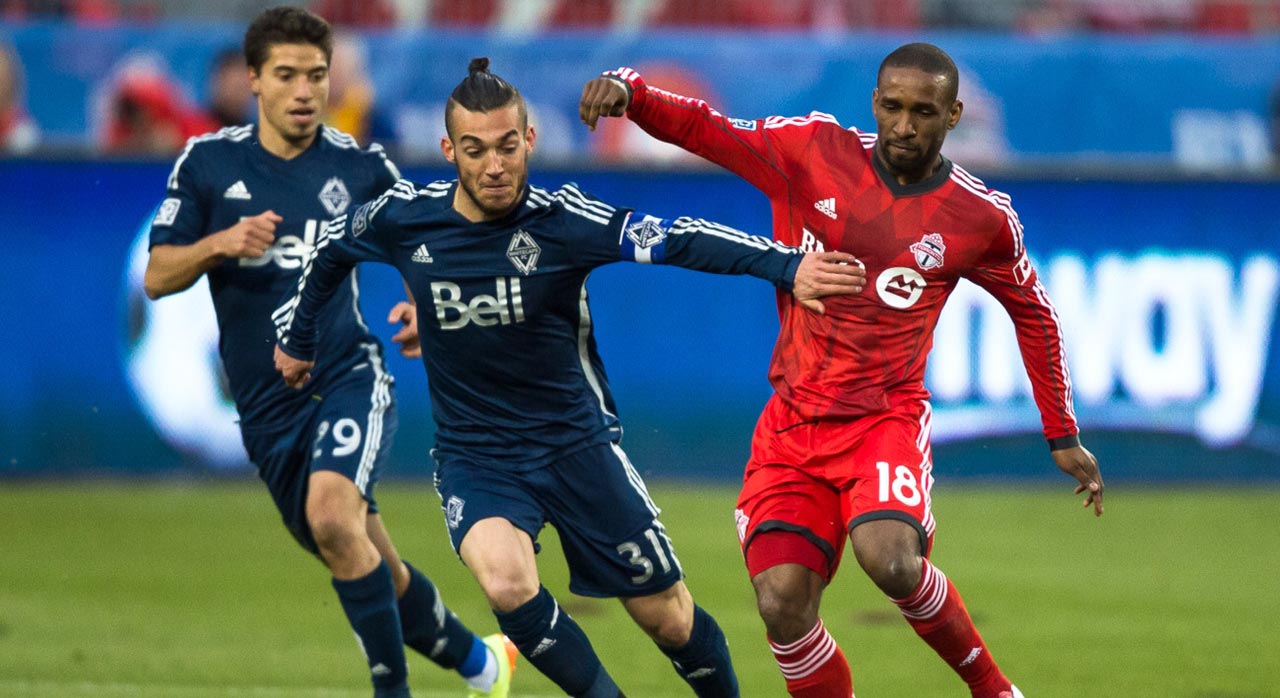 What looked like a straightforward 1-0 win for Toronto FC over the Vancouver Whitecaps turned into a hard-fought 2:1 victory after a pair of late goals exchanged by both sides brought the opening game of the Amway Canadian Championship semifinals to life.

What looked like a straightforward 1-0 win for Toronto FC over the Vancouver Whitecaps turned into a hard-fought 2:1 victory after a pair of late goals exchanged by both sides brought the opening game of the Amway Canadian Championship semifinals to life.

Jermain Defoe opened the scoring in the 28th minute after Gilberto slipped a perfectly placed through ball past the Vancouver back line. Defoe beat a tight offside angle, pushed the ball forward and tapped the ball past goalkeeper Marco Carducci to give the Reds a 1-0 lead at the half-hour mark.

Michael Bradley gave Toronto a second in the 89th minute after picking up a pass from Defoe and beating Carducci on at the far post with a low shot. The 2-0 result seemed assured, but subsititute Kekuta Manneh gave the Whitecaps a goal of their own in added time.

Tempers flaired soon after and the two teams came together in a confrontation that was dealt with quickly by referee Mathieu Bourdeau.

The first half was a one-sided affair, with Toronto FC creating most of the chances. Gilberto came closest to scoring, missing a header just wide. Defoe’s goal opened the game up a bit, though Bradley picked up a yellow card for a hard challenge in midfield not long after.Vancouver nearly found an equalizer in the 43rd minute when Russell Teibert slipped through the Toronto backline after a one-two with Residency midfielder Marco Bustos in the box. TFC ‘keeper Joe Bendik came off his line and saved the shot, but the ball rebounded fortuitously to Nicolás Mézquida, who saw his goal-bound effort saved off the line by Doneil Henry to preserve Toronto’s lead.

The second half gave the Whitecaps a few chances at goal, but on each occasion Bendik came up with a big save to keep the clean sheet. Carlyle Mitchell picked up a yellow card for a tackle on Toronto’s Issey Nakajima-Farran in the 49th minute, and Nigel Reo-Coker got one of his own on the hour mark for a similar foul.

Vancouver head coach Carl Robinson made the first change of the game, with Omar Salgado entering for Bustos in the 63rd minute and testing Bendik with a powerful shot not long after. Despite also throwing on the team’s hot hands in Manneh Sebastián Fernández, the ‘Caps saw themselves undone by Bradley’s late finish.

The visitors did get a glimmer of hope, however, when Manneh pounced three minutes after TFC’s second to cut the aggregate deficit and give the team a valuable away goal heading into next Wednesday’s return leg at BC Place.