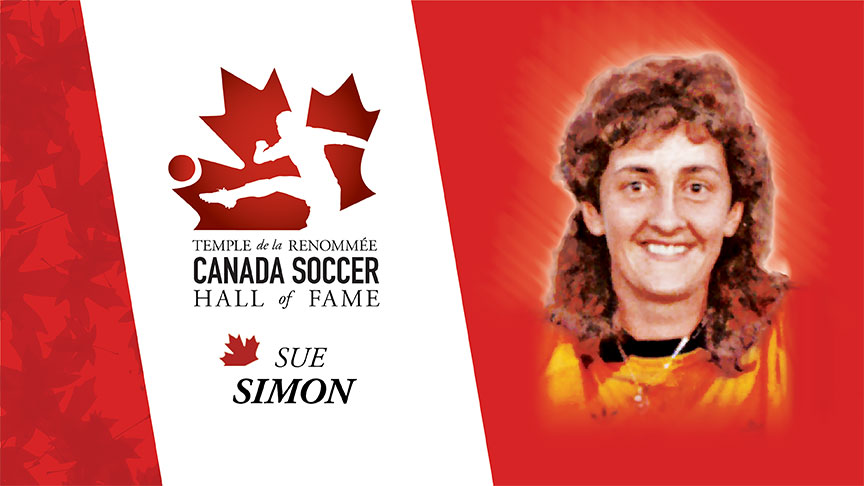 Sue Simon honoured by the Canada Soccer Hall of Fame

Sue Simon honoured by the Canada Soccer Hall of Fame

Thirty-five years after her Canada debut, goalkeeper Sue Simon still looks back at her time with Canada Soccer’s Women’s National Team as one of the “best things that ever happened to me.”

Already a multiple National Championships winner with Edmonton Angels SC, Simon was an original member of Canada Soccer’s Women’s National Team in July 1986 and one of the team’s best players in a two-match international series against USA. She was the Most Valuable Player of the second match, a historic 2:1 victory on 9 July 1986.

Today, Simon is one of eight legends who has been inducted to the Canada Soccer Hall of Fame in 2021. Marking the 35th anniversary of Canada Soccer’s Women’s National Team, the eight legends represent Canada’s landmark first decade in international football from the original selections in 1986 through to Canada’s first participation at the FIFA Women’s World Cup™ in 1995. The eight inductees are Sue Brand, Annie Caron, Carla Chin Baker, Janet Lemieux, Luce Mongrain, Suzanne Muir, Cathy Ross and Sue Simon.

“It was a dream come true for me,” said Simon of being selected to represent Canada at the 1986 North America Cup. “The feeling of putting on the jersey, walking in the parade and carrying the flag, it is something I will treasure for the rest of my life.”

From a short Canada selection camp in early July, Simon was one of 16 players selected to represent Canada at the 1986 North America Cup, which was part of the Sons of Norway soccer tournament in Blaine, Minnesota. There was a parade on Sunday 6 July, the first-ever Canada-USA match on Monday 7 July, an official reception on Tuesday 8 July, and a second Canada-USA match on Wednesday 9 July. After both teams won one game each, the two sides played a 30-minute mini match which the Americans won to clinch the tournament.

Simon made her mark in the second match when Canada won 2:1 with a pair of goals scored by Geraldine Donnelly in the first half. Simon was beaten only once in the second time after a free kick led to the goal by Lisa Gmitter.

“We were beaming after the win,” said Simon. “The US had a very strong system and we were just getting started, so to even compete, let alone win, was just unreal.”

Before her selection to Canada Soccer’s Women’s National Team, Simon was already recognised as one of the best goalkeepers in Canada for several years. She earned that reputation after leading the Angels to the first-ever Canada Soccer National Championships Jubilee Trophy in 1982 and then repeating as national winners in 1983, 1984 and 1985. She won a fifth-straight title in October 1986, finished third in 1987, then missed the Angels sixth national title in 1988 when she sat out the season for the birth of her first of two sons.

“We trained a lot together, but what made it special was the time a lot of us spent together, even off the pitch,” said Simon. “There was a bunch of us that would go out and train over and above what was necessary. We were a family and we did everything together.”

Simon was one of four Edmonton players that won five-straight championships from 1982 to 1986, along with Anita Saiko, Cathy Sawchuk, and captain Tracy David. Both Saiko and David won their sixth national title in 1988 while Simon won her sixth Jubilee Trophy seven years later in 1995.

Along with her national titles, Simon won eight Alberta Cup provincial titles with the Angels and held the national record for most clean sheets by a goalkeeper at Canada Soccer’s National Championships. She joined the Angels in 1982 after she was recruited by incoming coach Stuart Brown, who had in fact coached her with league winners Edmonton Ajax in 1981.

“Early on before I played with the Angels, I was sort of on the fence whether I would play out or in,” said Simon, who was a league all-star as a midfielder in 1980 with Edmonton Dominco. “I did enjoy playing goal and I never had the speed to play out, so I guess that’s when I focused on playing goal. Just having those teammates in front of me, we were a very solid backline and very rarely did anything ever get through.”

Looking back on her career as a soccer player, Simon is both proud of her accomplishments and honoured to have protected Canada’s goal in those first international matches.

“I just loved the sport, the teammates that I had in youth soccer with Beverly Heights and then moving up from there,” said Simon. “At an early age, playing for the Angels and winning all those national titles that we did, then of course making the first-ever Canada team, it was all just beyond words. It was a very special time for me.”

I am deeply honoured with my induction into the Canada Soccer Hall of Fame in 2021 alongside my teammates. This honour is an acknowledgement of my achievements and you can only imagine how significant it is to me.

There are certain principles and values which I followed in my soccer career: the principles of fair play, honest competition and teamwork which are all equally important to me not just on the pitch but also in life.

To me, soccer is about the hours and hours of practice, kick-offs, goals, assists, penalty shots, the smell of wet grass and the sound the net makes when the ball hits the back (hopefully not behind me).

I want to express my gratitude to Bill Exley for the support during my very early years of soccer, Wayne Gordey for helping and encouraging me to be at my best and especially Stuart Brown, all the managers and teammates over the years that have supported and inspired me along the way. This is a team sport and without the 10 players in front of me I would never have achieved this wonderful tribute.

There are a lot of people that you meet and connect with as we go through life, but the things that means the most are the friendships that you gain along the way, so many thanks again to my family and friends who have assisted me through my many soccer years and thanks to Canada Soccer for this amazing honour and making my dream come true.