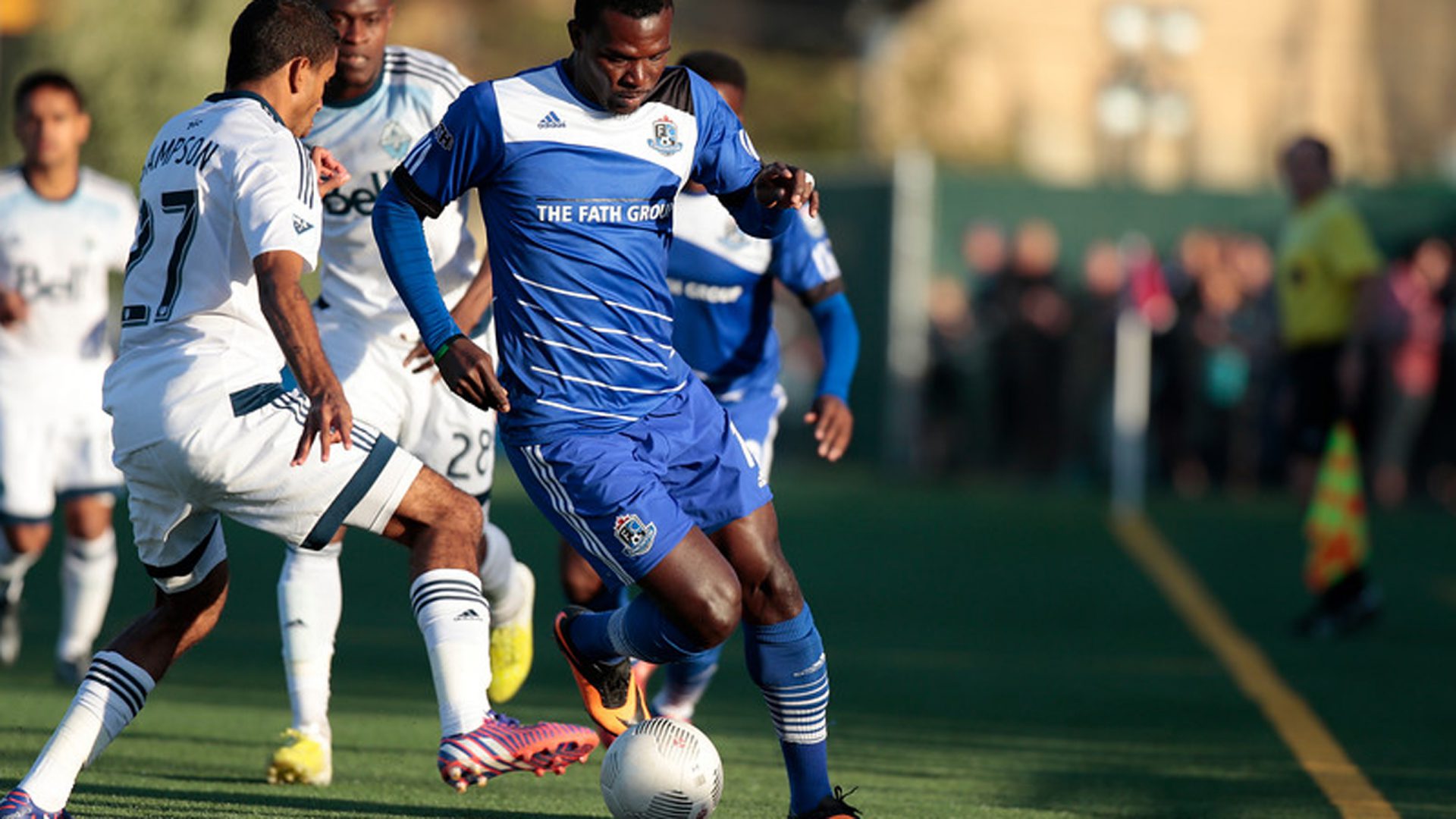 As a result, Vancouver will move on to face longtime Eastern Canadian rival Montreal Impact in the two-leg final. The Impact will host the first leg on August 12, with the second leg set for August 26 at BC Place.

FC Edmonton lost a heart breaking game 2:1 in front of 3,803 fans at Clarke Field against Vancouver Whitecaps FC in the second leg of the semifinals of the 2015 Amway Canadian Championships. Edmonton’s Tomi Ameobi equalized the match in stoppage time before Matias Laba sent the Whitecaps to the Canadian Championship finals with a last-minute goal.

Whitecaps FC got the game’s first goal on eight minutes from a penalty kick. After Eddies goalkeeper Matt VanOekel was cautioned for bringing down speedster Cristain Techera inside the box, Pedro Morales took responsibility for the visiting ‘Caps and the captain slotted the ball into the corner.

The Eddies’ best chance to draw level in the first half occurred on the 12 minute mark, when midfielder Lance Laing crossed a ball into the box to Ameobi, but the six-foot-four striker was unable to get enough contact on the ball to trouble ‘Caps ‘keeper Paolo Tornaghi.

Shortly into the second half, Edmonton defender Eddie Edward crossed a ball towards the back post where teammate Lance Laing’s header from 10 yards out went wide. The Eddies came close again on 59 minutes when Laing whipped in another cross but substitute Daryl Fordyce’s volley would also head wide.

After pressing for several minutes, Eddies got the equalizing goal early in stoppage time when Frank Jonke was brought down inside the box to draw the game’s second penalty kick. Ameobi stepped up to the spot and fired the ball into the left corner to draw even at 1-1.

Deep into stoppage time, second-half substitute Laba got the winning goal off a Vancouver free kick. After a scramble, the ball fell to Laba who struck the ball and beat VanOekel to make it 2-1.

“I was very proud of the players,” said FC Ed monton head coach Colin Miller. “I thought we were far superior in the second half. I thought we missed really good chances and we had the Whitecaps on the ropes, but unfortunately we fell a bit short.”

“It was a very difficult game,” said Vancouver Whitecaps FC head coach Carl Robinson. “I stressed to the guys after Wednesday’s game, that it is not an easy game against Edmonton. They got something to prove. They fight, they scrap and they run. And they’ve done that again today. They want to show us, an MLS team, what they’re all about. And they did that. I’ve got to give Edmonton a lot of credit today. They fought till the very end. I wasn’t happy that we conceded in the 92nd minute. I disagreed with the seven minutes of extra time, but I’m glad that that he actually showed seven minutes of extra time because we were able to get the win.”

As a result, Vancouver will move on to face longtime Eastern Canadian rival Montreal Impact in the two-leg final. The Impact will host the first leg on August 12, with the second leg set for August 26 at BC Place.