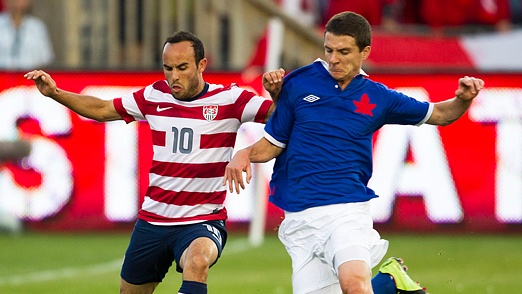 As Canada approaches its first major battle of a new era, the team has appointed a new general.

Will Johnson – admired by fans and fellow players alike for his industry, guile, and increasingly for his growing offensive output – has been handed the captain’s arm-band by Interim Head Coach Colin Miller as the Men’s National Team prepares to take part in the 2013 CONCACAF Gold Cup.

“It’s a big responsibility but it is something I enjoy.”

Although Johnson is neither the oldest nor the most experienced player (he is 26-years-old and has 32 caps) on the team it will likely come as no great surprise to many Canadian supporters that he has been granted the captaincy.

Also captain for his club side Portland Timbers in MLS, his will to win was on full display during Canada’s Brazil 2014™ campaign and can perhaps be best encapsulated by an off-camera sequence from one of Canada’s crucial matches on the road to Rio.

As Canada were holding onto a 1-0 away lead in Havana – down to 10 men in the scorching Caribbean sun – Johnson celebrated with a furious fist pump as his team won a corner in the dying stages of the match, helping to wind down the clock towards a vital away win.

Toronto-born, Johnson is all about getting the little things right.

“I take great pride in being a good pro and hopefully that carries over to some of the younger guys,” he said.

But Canada’s ‘Mission 2014’ was not accomplished, and instead screeched to an agonizing halt with the team suffering a freak defeat in Honduras on the final day of CONCACAF’s third round of qualifying.

“There was a lot of emotion at the end of that game and rightfully so,” said Johnson.

Johnson and his fellow veterans are now looking to help Canada rebound from one of the most difficult defeats in the history of the Men’s National Team program and they have one simple message to the team’s youngsters: “We need to fight.”

“The only way you can move on from something like that is just to get back up and keep fighting.

“The guys who are tasked with pulling on the national team shirt right now have a big job to do – because we are down right now and we need to get back up and start fighting.”

Johnson will be fighting alongside a new crop of young Canadian players at the Gold Cup. Eight players will be looking to make their debuts at the senior level.

“We need to establish a new generation of players,” he said.

“There is a pool of young guys, they’ve gathered the greatest young talents that we have in the country and put them all together on a team to try to give them an opportunity and some experience for the future.

“My message is always the same: no matter what we do, we always have to compete. Just because we are young it doesn’t mean we can’t go out there and compete, fight and win. It all has to start with the right attitude.”

Canada will take part in two more training sessions in Oxnard before heading into Los Angeles ahead of Sunday’s tournament opener against Martinique at the Rose Bowl in Pasadena, CA (17.30 ET / 14.30 PT | Live on Sportsnet World).

The early Canadian teams (in the 1980’s / 90’s) were difficult to beat. But we know that we need also need to be able to keep the ball – particularly in some of the hostile away environments in CONCACAF.

We need to be able to blend those two pieces of Canadian identity. We need to fight and be hard to beat; but we also have enough talent that it will come through and produce some results.

Johnson on his personal future:

I’ve landed in a great situation in Portland – a fantastic soccer city with fans that are second-to-none in North America. I’m very excited to be there and I obviously want to continue to lead that group of guys as we continue to revamp the club.

For Canada – I want to try and lead this team forward too. I don’t want the match in Honduras to be my last FIFA World Cup Qualifier, I want to have another crack at it and just continue to do everything I can for the team.