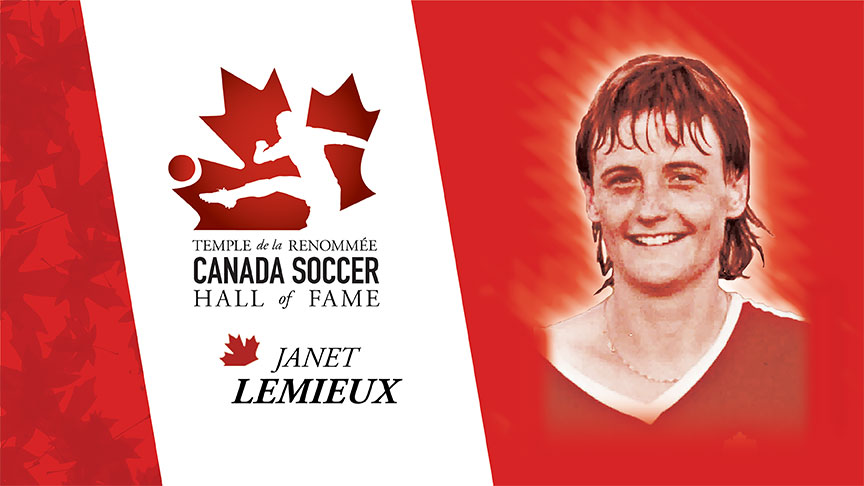 Janet Lemieux honoured by the Canada Soccer Hall of Fame

Janet Lemieux honoured by the Canada Soccer Hall of Fame

A pioneer and legend, Janet Lemieux was a four-time Canada Soccer National Championships winner and original member of Canada Soccer’s Women’s National Team. A sweeper for both club and country, she played in every minute of Canada’s first six international “A” matches before she had to retire through injury.

More than 30 years later, Lemieux is one of eight legends who has been inducted to the Canada Soccer Hall of Fame in 2021. Marking the 35th anniversary of Canada Soccer’s Women’s National Team, the eight legends represent Canada’s landmark first decade in international football from the original selections in 1986 through to Canada’s first participation at the FIFA Women’s World Cup™ in 1995. The eight inductees are Sue Brand, Annie Caron, Carla Chin Baker, Janet Lemieux, Luce Mongrain, Suzanne Muir, Cathy Ross and Sue Simon.

“My passion for the game began when I was very young,” said Lemieux. “I played on a boys’ community team in elementary school from maybe grade three to grade seven. I played with a group of boys that accepted me just as one of them and we played and played and played, we played at recess, we played at lunch, we often wouldn’t come back when the school bell rang because we just wanted to keep playing. I played in a community league with them, we played strategy and with my best friend we talked strategy and we would go to his backyard and play and play. It was just something that I loved to do.”

Amazingly, Lemieux reached the pinnacle of her sport despite a career that was twice interrupted on her journey to success at the national and international levels. With no girls’ teams for her to join in the 1970s, she turned to athletics and short-distance running, once finishing as high as third place in the Alberta high school provincial championship for 1,500 metres. She also played and coached tennis, but after two seasons in the Edmonton Women’s Soccer League with Ajax SC, she left the game and took a tour of Europe while recovering from injuries.

While she was gone, she missed several phone calls from her former Ajax SC coach Stuart Brown, who was now in charge of the national champion Edmonton George’s Angels. Brown convinced her to make another comeback and she joined the soon-to-be-famous club for the 1983 season.

“I grew up in the 1970s and there was no girls soccer, so I played boys soccer in the community league and later I went into track and field and I also played tennis,” said Lemieux. “I had such inspirational people along that journey (and) having all those different sports come together, I think it brought me a certain level of maturity and depth. I could apply all those things from different sports, from all the coaches that I had throughout my career, and bring that to the field. I can’t be thankful enough for those coaches.”

Playing in front of goalkeeper Simon and alongside stopper Tracy David, Lemieux fortified the Angels’ defence en route to four more national titles from 1983 to 1986.

“Stuart Brown always remembered me from the days that I played with Ajax and he was dogged in tracking me down, so in 1983 I began playing with the Angels,” said Lemieux. “It was such a wonderful team, the girls were all very passionate and dedicated to soccer. I just felt at home with that team, they were so lovely.”

From 1983 to 1987, Lemieux also helped the Angels win five Edmonton Women’s Soccer League titles and five Alberta Cup provincial championships. She played for Alberta’s provincial all-star team and was a team MVP at the University of Alberta. Her play earned her a call up to Canada Soccer’s first-ever Women’s National Team in 1986.

“We were a group of women who were really breaking the barriers,” said Lemieux. “It wasn’t a popular thing to play women’s soccer back them, but we all had such passion for the game and we really didn’t care what other people thought, we were just going to go out and play the very best soccer that we can. I think once the Angels and all our teammates won the first National Championships, they weren’t going to give up easy.”

From 1986 and 1987, Lemieux was the only player to feature in every Canada minute before she suffered an injury at the 1987 World Invitational Women’s Tournament.

“Wearing the Canadian shirt was the pinnacle of achievement for all of us players,” said Lemieux. “We couldn’t play for fame, we couldn’t play for money, so we played for passion and the love of the game. So it was such an honour to put on the Canada shirt and strive to be the best that I could for myself and for the whole Canadian team.”

Lemieux will now forever be remembered as one of Canada’s greatest legends as an honoured member of the Canada Soccer Hall of Fame.

“If you have a passion for something, soccer or anything, dream big and go for that passion,” said Lemieux. “You will never regret doing your very best at whatever you are doing. Along that journey, just by trying and doing your very best, you will meet the most amazing people, you will have the most amazing experiences, and you can look back and be proud of what you did.”

I am extremely grateful and honoured to be selected to the Canada Soccer Hall of Fame and to have my name included among some of the “greats” of women’s soccer with whom I had the pleasure of playing – Connie Cant, Tracy David, Ger Donnelly, Charmaine Hooper, and Joan McEachern, to name a few, as well as the current 2021 class of seven inductees. You are only as good as those players who surround you and it was truly special to have played beside this group of outstanding players who exemplify the hard work and dedication it took to begin and build the foundation for Canada Soccer’s Women’s National Team Program from 35 years ago to the success that it is today.

I feel so fortunate to have had so many people contribute to my success as a player by being so generous with their time, expertise and friendship. As a girl growing up in the 1970s, there was no easy or direct path to play elite women’s soccer. Therefore, I would like to make a special tribute to those many nameless individuals who did, and continue to do the extraordinary, whose acts of kindness paved the way for my success and who continue to contribute to the development of future elite athletes.

Just a few examples from my own childhood include: the Belgravia Community Soccer coach and boys team who allowed me to play on the their team throughout my elementary school years, without question; my running teammates and coach who taught me discipline and the joys of competition and being part of a team; my tennis coach who started me in tennis by giving me free lessons; and my tennis club partner, who covered my coaching and teaching responsibilities to allow me to take time away from work to play soccer.

I would also like to mention the pivotal role the Edmonton Angels SC and Canada Soccer played in providing the opportunity for women’s soccer and my career to thrive and succeed. It would be remiss not to give special acknowledgement and thanks to coach Stuart Brown and team manager Gail Amort-Larson, for the endless hours they committed to the team.

Finally, I want to thank the players of the Angels and the National Teams. Without their shared passion for the game, their friendship and their desire to be the best club or the best players in Canada, I would never have been named to the Canada Soccer Hall of Fame. Thank you for being my teammate and friend. Thank you for your encouragement, motivation, and support– I truly cherish the many, many good times, laughs and memories.