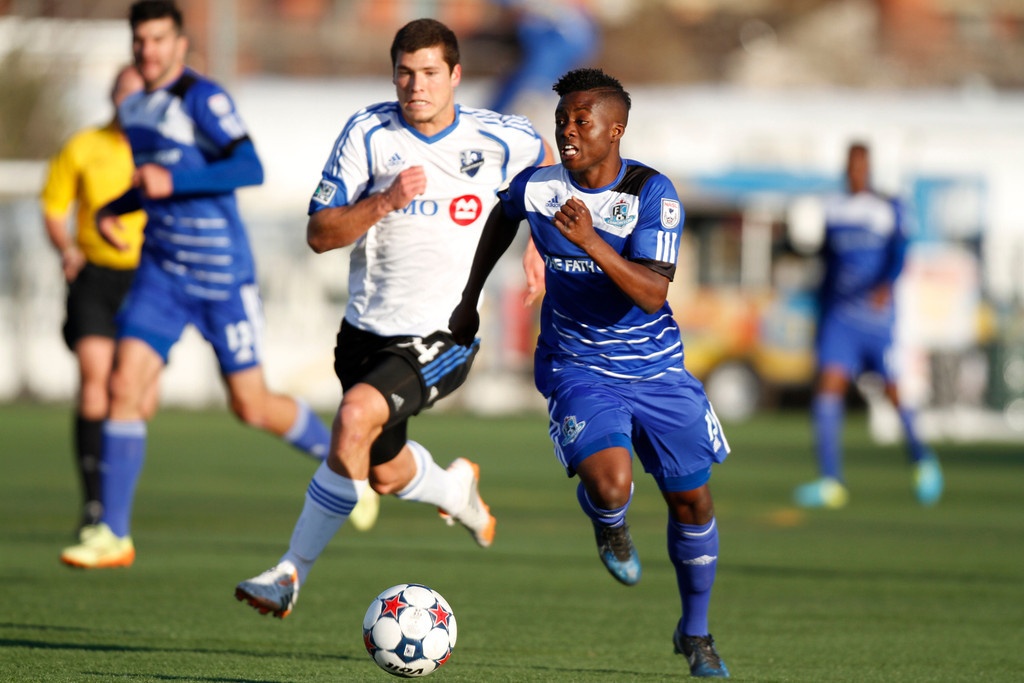 FC Edmonton claim their second Amway Canadian Championship win in 2014 and their first against MLS competition in a match wherethe Eddies came in as the underdogs to take a 2:1 victory over Major League Soccer (MLS) side Montréal Impact on Wednesday.

In a match where FC Edmonton came in as the underdogs, the Eddies took a 2:1 victory over Major League Soccer (MLS) side Montréal Impact on Wednesday. This match was the second of two semi-finals on Wednesday evening after Toronto FC began its Amway tournament with a 2:1 win over Vancouver Whitecaps FC.

FC Edmonton Head Coach Colin Miller once again displayed his confidence in 17 year-old Hanson Boakai by having the young midfielder in the club’s starting line-up. Miller’s confidence did not go amiss when in the 18th minute, a through ball from Daryl Fordyce found Boakai in-between two Montreal defenders, but his final left-footed shot was easily saved by Impact goalkeeper Evan Bush.

Montreal made the trip out west without designated player Marco Di Vaio, but the visiting club’s captain Patrice Bernier helped Montreal to it’s first chance on the evening in the 42nd minute after Bernier managed a ball to Calum Mallace, whose final shot was just wide of the near post.

“The first 45 minutes have gone well for us defensively,” said FCE’s Daryl Fordyce at the half. “As the game goes on, we’ll gain more confidence and we’ll only get better as the game continues.”

The defending Voyagers Cup champions looked to gain that precious away-goal to start off the second half in Edmonton as they continued to edge FC Edmonton off the ball in an attempt to turn the game in their favour.

This paid dividends in the 54th minute when Jack McInerney sends a header in at close range that goes off the Eddies crossbar. Shortly after in the 56th minute, Montreal drew first blood thanks to McInerney and ended FC Edmonton’s hope at a clean sheet. After earning a free-kick, Bernier sends an in-swinging kick into the Eddies 18-yard box which found McInerney un-marker and this time, he made no mistake finding the back of the net for Montreal. 1-0 for the visitors.

Just moments later in the 60th minute, Boakai wriggles free under pressure in the midfielder to send in an inch-perfect ball to an on-rushing Tomi Ameobi who slots it passed Bush to bring the Eddies even 1-1.

FC Edmonton had a chance to take the lead once again thanks to Boakai and Ameobi. After Boakai floated a ball into the 18 yard-box, Ameobi rose and headed the ball just over the crossbar. This ball would be Boakai’s last contribution to the match being subbed out in the 72nd minute to make room for Mike Banner.

After going a goal down at the beginning of the second half, FC Edmonton went for the win as the clock hit 90 minutes.

Montreal defender Karl Ouimette sent a header back to his ‘keeper in the 90th minute, but it came up short as second-half substitute Michael Nonni jumped on the chance to chase down the ball and finished into the top of the net to give the Eddies a 2-1 victory when the full time whistle blew.

“We were working the whole night,’ said game-winning goal scorer Nonni. “We played well and got a few lucky bounces. We’re very happy with the win.”

FC Edmonton claim their second Amway Canadian Championship win in 2014 and their first against MLS competition. The Eddies will be heading to Montreal to play the second leg of the semi-final next Wednesday, 14 May (KO 19.30 local / 17.30 MT / 16.30 PT).