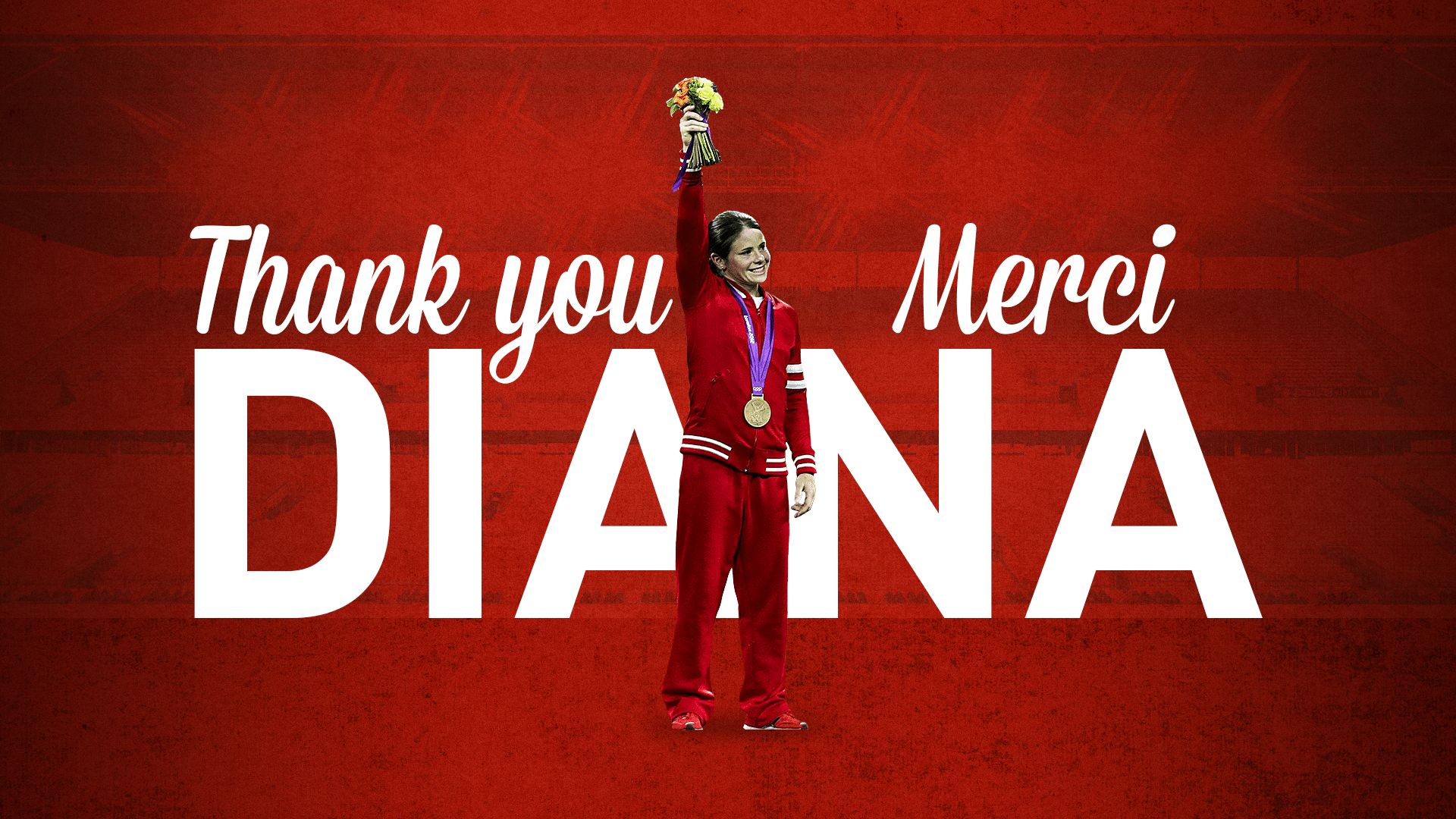 Diana Matheson’s biggest moments on the football pitch were as big as they come. Whether it was her assist in the FIFA Women’s World Cup USA […]

Diana Matheson’s biggest moments on the football pitch were as big as they come. Whether it was her assist in the FIFA Women’s World Cup USA 2003 Quarter-finals to knock out the defending runners up China PR or her last-minute, winning goal against France to capture a historic bronze medal at the London 2012 Olympic Games, Matheson was always at the heart of Canada Soccer’s Women’s National Team’s greatest achievements.

She won back-to-back Olympic bronze medals, a Concacaf Championship, a Pan American Games gold, and finished a Canada-best fourth place at that FIFA Women’s World Cup USA 2003. In all, she played at four FIFA Women’s World Cups, three Olympic Games, won medals at six Concacaf tournaments, and made more than 200 international “A” appearances. This year, she hangs up her boots after 18 years with Canada Soccer’s Women’s National Team.

That historic goal at the London 2012 Olympic Games, however, will forever be remembered as her signature moment.

With just 10 seconds left in the match, Matheson scored the winning goal that secured Canada Soccer’s first of back-to-back bronze medals, also the country’s first in a Summer Olympic Games team sport in 76 years. She scored on a rebound, just moments after she played Sophie Schmidt into the box and Schmidt’s shot deflected off a defender into her pathway. A nation erupted back home and Canada Soccer’s Women’s National Team celebrated their first Olympic bronze medal moments later when the referee blew the final whistle.

Said Matheson later that year, “this has been one of the most incredible years of my life. I still look back on what we were able to accomplish as a team in London and what it has meant to all of Canada and for the growth of soccer in the country.”

Matheson played at the senior, professional and international level for 20 years, also winning Canada Soccer’s National Championships with Oakville SC in 2002 and the Norwegian Toppserien in 2012 with Lillestrøm SK. She reached the Norwegian Cup final in 2009, was one of the first Canadians to feature in UEFA Women’s Champions League in 2009-10, and reached the NWSL Cup in 2016 with the Washington Spirit. Over the course of her career, she also played with Toronto Inferno, Ottawa Fury, Seattle Reign and the Utah Royals / Kansas City. At the university level, she was a standout at Princeton University.

With Canada, she was just 18 years old when she made her debut in the youth program in 2002 and still 18 when she made her international “A” debut on 18 March 2003 with Canada Soccer’s Women’s National Team. She scored her first goal on 15 June 2003 against Mexico and then got that historic assist on Charmaine Hooper’s winning goal at USA 2003, beating the giants China PR to reach the FIFA Women’s World Cup Semi-finals for the first time.

“Representing Canada has been the greatest honour of my life and I can’t believe my playing days have come to an end,” said Diana Matheson. “I’m so grateful for all the incredible people I have met along every step of the way and for the Canadian fans for being such a huge part of the journey. I know this will be an emotional time for me, but I’m truly excited for what’s next and for continuing to be a part of the growth of women’s soccer in Canada.”

“Diana has had a massive impact on Canada Soccer’s Women’s National Team program,” said Bev Priestman, Canada Soccer’s Women’s National Team Head Coach. “Not only has she been a great leader for this team both on and off the pitch, she also inspired an entire nation during her incredible career. The winning goal at the London 2012 Olympic Games will forever be a turning point moment in the history of this program. We all wish her the best in her next adventure.”

Along with all her goals and records, Matheson has already been honoured twice as part of the London 2012 Olympic team, first as the Canadian Press Team of the Year in 2012 and later as celebrated by the Canadian Olympic Hall of Fame in 2019. Named to Canada Soccer’s All-Time XI women’s team in 2012 as part of Canada Soccer’s centennial celebrations, she received the Queen’s Diamond Jubilee Medal in 2012 and had a street in Oakville named after her in 2017. Three times a runner up in voting for Canadian Player of the Year, she was an NWSL Best XI midfielder and Washington Spirit team MVP in 2013. She also led Canada in minutes played three times and ranked second with 16,715 career minutes played with Canada Soccer’s Women’s National Team.