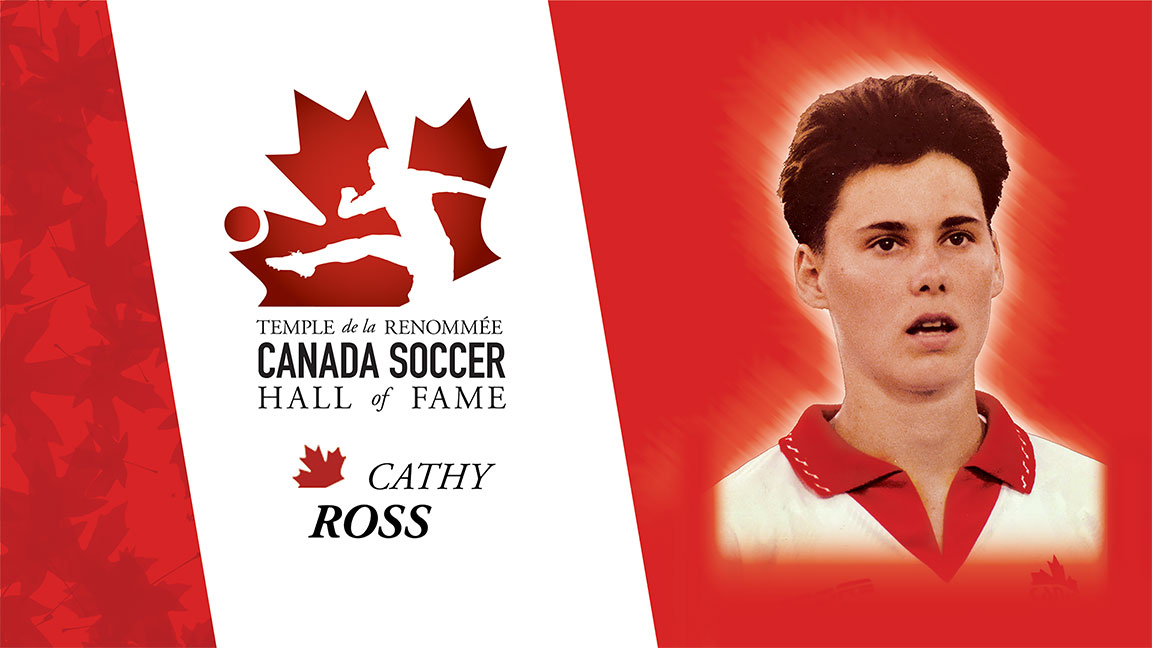 Cathy Ross honoured by the Canada Soccer Hall of Fame

Cathy Ross honoured by the Canada Soccer Hall of Fame

Watching today’s generation of superstars, Cathy Ross believes that Canada can beat their long-standing Concacaf rivals USA and win an Olympic Games and FIFA World Cup. An original member of Canada Soccer’s Women’s National Team when they beat the Americans in 1986, she now follows the team as one of their supporters.

“We need to win the FIFA World Cup and we need to beat the Americans,” said Ross. “We have been in that battle since the story of the National Team began.

Ross is one of eight legends who has been inducted to the Canada Soccer Hall of Fame in 2021. Marking the 35th anniversary of Canada Soccer’s Women’s National Team, the eight legends represent Canada’s landmark first decade in international football from the original selections in 1986 through to Canada’s first participation at the FIFA Women’s World Cup™ in 1995. The eight inductees are Sue Brand, Annie Caron, Carla Chin Baker, Janet Lemieux, Luce Mongrain, Suzanne Muir, Cathy Ross and Sue Simon.

Ross was Canada’s 18-year old stopper in that historic 2:1 win over the Americans on 9 July 1986, which was also the program’s second international game. She went on to play 34 international “A” appearances across 10 years, ranked tied for fourth when she left international football after the FIFA Women’s World Cup Sweden 1995.

“With the right support, I believe the Canadians can beat the Americans and win a FIFA World Cup,” said Ross. “I check in now and then to see how they are doing and we are so close.”

Ross was the only Canadian to feature in the program’s first 24 international “A” matches from 1986 to 1991, including the World Invitational Women’s Tournament (Chinese Cup) in 1987, the International Women’s Football Tournament China 1988, and the first Concacaf Women’s Championship in Haiti in 1991. She left the international game for a few years, then rejoined the team for the second Concacaf Women’s Championship at Montréal in 1994.

“Her positioning, tackling skills and heading made her a starter even if she had not been playing for a few years,” said Sylvie Béliveau, Canada Soccer’s Women’s National Team Head Coach at Sweden 1995. Along with Caron, Chin Baker, Geri Donnelly, Charmaine Hooper and Michelle Ring, Ross was one of six original Women’s National Team members that suited up for Canada’s first-ever participation at the FIFA Women’s World Cup.

A Canada Soccer National Championships winner with Coquitlam United SC in 1987, she was a one-time BC Soccer Cup winner (1987) and one-time Alberta Cup winner (1990 with the Edmonton Angels). With Canada at the international level, she scored three goals (two in 1988 and one in 1990) and was the team’s top player at the 1987 World Invitational Women’s Tournament.

“Wearing the Canada shirt was everything,” said Ross. “It was like putting on a super hero suit. When you put on that jersey, you just turned into something that you were very proud of and you wanted your country to be proud and your teammates to be proud.”

“I gave everything that I had and I think that was quite helpful that I could be counted on. We were all in it together and we didn’t want to let anyone down.”

I wish to sincerely thank Canada Soccer for the honour of being inducted to the Canada Soccer Hall of Fame. I am humbled to be acknowledged alongside my teammates and fellow inductees with whom I have had the privilege of playing the game.

To all the passionate people who came before me and served as a source of inspiration for making the game bigger and the stage brighter so I could follow my dreams to represent Canada, a huge thank you.

I wish to express my utmost gratitude to the many coaches and mentors who collaboratively helped me arrive at this moment. To British Columbia provincial coach Len Coombes for realizing that I had stronger potential as a central defender than a centre forward. To Simon Fraser University coach Shelley Howieson for her support and guidance and many thanks to Head Coach Neil Turnbull for selecting me to play on the first Canada Soccer’s Women’s National Team in 1986 and for developing me into the best player that I could be.

To Gail Amort-Larson, your generous support and care when I moved to train in Edmonton was instrumental in my success, I am so grateful to you. Thank you to friends Ger Donnelly and Joan McEachern for your unwavering kindness and friendship. I would also like to take the opportunity to thank all of my teammates. I am so proud of what we accomplished together. You have all given me more gifts than I could ever give back and have been instrumental in my growth both as a player and as a person.

To the National Team players and coaches who came after me, you have continued to reinvent the game and are a source of pride and inspiration to Canadians everywhere. Because of your efforts, women’s soccer in Canada will never be the same. Thank you for your ongoing commitment to move to the women’s game forward.

And lastly to my daughter Alie, although you did not see me play on the field, my hope is that you will be inspired to find your own strength and confidence, to create experiences and memories that encompass the values of friendship, hard work, compassion, love, respect and perseverance as I was so fortunate enough to have done.