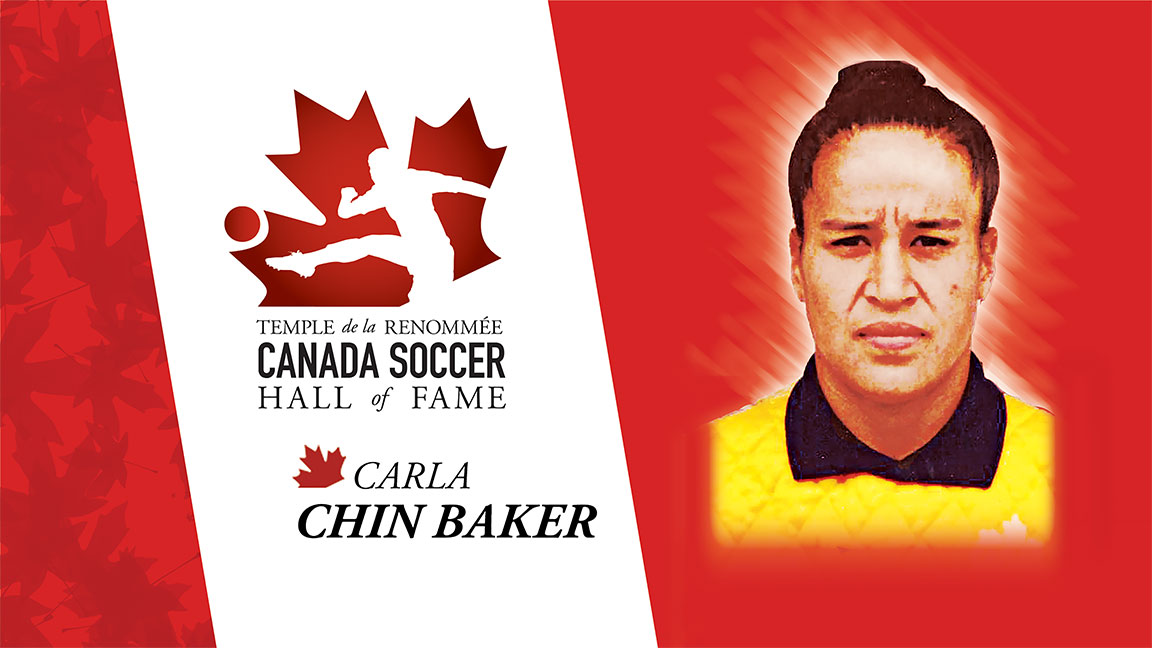 To play for her country and to play at the highest level at a FIFA Women’s World Cup were just two of the highlights from goalkeeper Carla Chin Baker’s soccer career. An original member of Canada Soccer’s Women’s National Team in 1986, Chin Baker traveled the world to represent Canada from the program’s first international matches in USA to competitions hosted in Chinese Taipei, China PR, Denmark, Bulgaria, Haiti, France, Japan, and Sweden.

“The opportunity to represent Canada Soccer and wear the Canada jersey was the greatest honour of my athletic career,” said Chin Baker. “It was an absolute incredible experience and I would have never imagined that that opportunity would have come. Reflecting back on the journey and being one of the founding members, it’s really allowed me many opportunities within the game of soccer to be able to work at many different levels, but more important it showed me how to be a good teammate, my work ethic, communication, and all those particular skills that help you be successful in life after the sport.”

Chin Baker is one of eight legends who has been inducted to the Canada Soccer Hall of Fame in 2021. Marking the 35th anniversary of Canada Soccer’s Women’s National Team, the eight legends represent Canada’s landmark first decade in international football from the original selections in 1986 through to Canada’s first participation at the FIFA Women’s World Cup™ in 1995. The eight inductees are Sue Brand, Annie Caron, Carla Chin Baker, Janet Lemieux, Luce Mongrain, Suzanne Muir, Cathy Ross and Sue Simon.

Chin Baker made 29 career international “A” appearances from 1986 to 1997, ranked first amongst all Canadian goalkeepers when she left international football. Along with Caron, Ross, Geri Donnelly, Charmaine Hooper and Michelle Ring, she was one of six original Women’s National Team members that represented Canada at their first FIFA Women’s World Cup at Sweden 1995.

At one point, she played in a career-high 11 consecutive Canada “A” matches from 1990 to 1993. At the 1991 Concacaf Women’s Championship in Haiti, she posted four consecutive clean sheets before Canada finished second in the tournament behind USA. Along with Chin’s 29 official international “A” matches, she also played eight additional tournament matches against either national “B” sides or a clubs competing against Canada.

“Working with my teammates, those players in front of me, I felt I would contribute from a fitness standpoint and then I would work on my strengths which were my quickness, my lateral agility and my ability to come off the line,” said Chin Baker. “To really maximize those characteristics helped me be successful along with my teammates helping me out in front of me.”

Chin Baker also noted the importance of good communication between the goalkeeper and her defenders.

“I definitely have to credit the defensive line in front of my for saving me on many, many occasions, but I think my best attribute would be communication, trying to organise them, demanding them to get to their spots when they needed to be there and present, and as a unit just working our tails off every single day to improve and to be all on the same page.”

Now, nearly 25 years after she left the game as a goalkeeper, Chin Baker looks back fondly on her time with Canada Soccer’s Women’s National Team.

“Focus on the journey,” said Chin Baker. “If you make the decision to go after it, then put your whole heart and soul into it, control the controlables, have the right mindset, be present in every situation and enjoy every situation that you have because those opportunities become fleeting with more and more competition and the level being so high in Canada right now.”

I am honoured and humbled to be inducted into the Canada Soccer Hall of Fame with the Class of 2021, my fellow teammates, Sue Brand, Annie Caron, Janet Lemieux, Luce Mongrain, Suzanne Muir, Cathy Ross and Sue Simon.

I would like to thank my parents, family, Rosemarie Sears, Charmaine Hooper, Michele Houchen, Cathy Klein, Lisa Munro, Tracy Miernicki, Cathy Redshaw Briggs, Ontario Soccer teammates and my husband, Tom for their unconditional love, belief in my abilities and unwavering support in making my dream of playing for Canada a reality.

Many thanks to Scarborough United and Oakville Soccer Club for the foundation of my youth development, and SoccerPlus GK camps for elevating my performance by preparing me for the 1995 FIFA Women’s World Cup. I will be forever grateful to Chris Petrucelli, Bill Millar, the late Tony DiCicco, Dick Howard, the late Peter Bonetti, Lincoln Phillips, Kim Maslin Kammerdeiner, Dave Latourette, Matt Clark, Bill Steffen and Becky Burleigh for their leadership, guidance, training and encouragement as I refined my game at the international level.

To all my teammates, words cannot describe my gratitude for the positive memories of our travels, friendships that will last a lifetime, laughter that brought us to tears, and camaraderie during our soccer journey. I will always cherish the opportunity to represent Canada and play with so many talented women. Thank you, Canada Soccer, for this breathtaking honour.