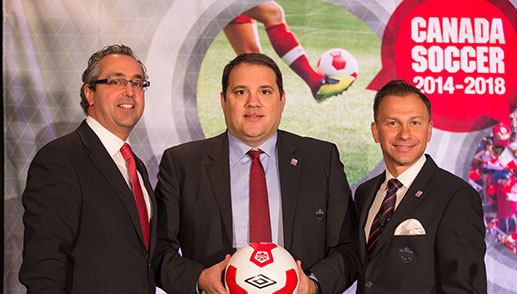 Titled Leading a Soccer Nation, the document clearly states the four strategic priorities that will guide the Association’s decision making for the next cycle.

Over a year in the making, the most recent iteration of the Canadian Soccer Association’s Strategic Plan, covering the quadrennial 2014-2018, was presented to the media and public on Thursday. Titled Leading a Soccer Nation, the document clearly states the four strategic priorities that will guide the Association’s decision making for the next cycle.

The Canadian Soccer Association’s 2014-2018 Strategic Plan, Leading a Soccer Nation, is a plan with a difference. Not only is its methodology a departure from the traditionally internal plans that were created in the past, but it also reflects the excitement and energy that permeates a now evolved landscaped and collective outlook on soccer in Canada.

“The 2014-2018 Strategic Plan is based on ideas gathered from coast to coast,” said Victor Montagliani, President of the Canadian Soccer Association, Chair of the FIFA Women’s World Cup Canada 2015TM, member of CONCACAF’s Executive Committee and member of the FIFA Legal Committee. “It will help us build towards becoming a leading soccer nation and provides the road map to help get us there. It is a product of the passion that pervades the Canadian soccer community… the passion that will assure our success moving forward.”

As part of the Strategic Plan elaboration process, for the first time, the Association ran a public outreach initiative from 17 March to 15 June, asking the soccer community to share their thoughts on how to best support the beautiful game in our country. Canadians – fans, players, parents, coaches, officials, administrators, sponsors, vendors and media responded by the thousands by filling out an online survey, from which strategic imperatives started to take shape.

“Our focus must remain fixed on the key priorities that emerged from our consultations with Canadians and that are outlined in the plan: technical leadership, National Team performance, and growing and governing the game of soccer in Canada,” summarized Montagliani.

The four strategic priorities for the Canadian Soccer Association in 2014-2018 are:

1. Invest in TECHNICAL LEADERSHIP by supporting our players, coaches and officials at all levels of the sport.
2. Ensure CONSISTENT, WORLD-CLASS PERFORMANCES by our National Teams.
3. ENCOURAGE the GROWTH OF THE GAME in our country.
4. GOVERN the game in Canada PROFESSIONALLY in collaboration with our partners.

“Canadian soccer is growing up,” added Peter Montopoli, General Secretary of the Canadian Soccer Association. “Expectations are higher. It is a sign that soccer in Canada is maturing, and an indication of its increasing relevance as the largest participation sport in Canada.”

The message the Canadian Soccer Association sends to the soccer community with this strategic vision is clear: the Association is ready to guide the technical development of the sport in this country, and plans to do so by leading the process to mandate structure alignment and capitalizing on renewed and expanded partnerships.

“While the road ahead is clear, we can expect bumps along the way,” added President Montagliani. “Our diverse community will not always agree, but ultimately we all have the same goal. To be able to stand proud with our fellow Canadians as we build towards becoming a leading soccer nation, one that consistently qualifies for and successfully competes in every single FIFA competition, with the pinnacle event that is the FIFA World Cup.”

True to its mission, the Canadian Soccer Association has spent the last several years growing the game, establishing its expertise in hosting international events, putting its financial house in order, revamping its governance structure, and building the Canada Soccer brand.

The next step for the Canadian Soccer Association will be to define the various operational plans that will allow the organization to deliver on these four strategic priorities.

Soccer in Canada has never been stronger. With a record number of participants, unprecedented corporate support, and dedicated leaders working together at all levels, from community clubs, through the Provincial and Territorial Member Associations, to the national governing body in Canada Soccer, the stage is set for the organization to build on the momentum and advance beyond its reputation in every aspect of the beautiful game.

An electronic version of the Canadian Soccer Association’s Strategic Plan 2014-2018 Leading a Soccer Nation document is available for download on canadasoccer.com.