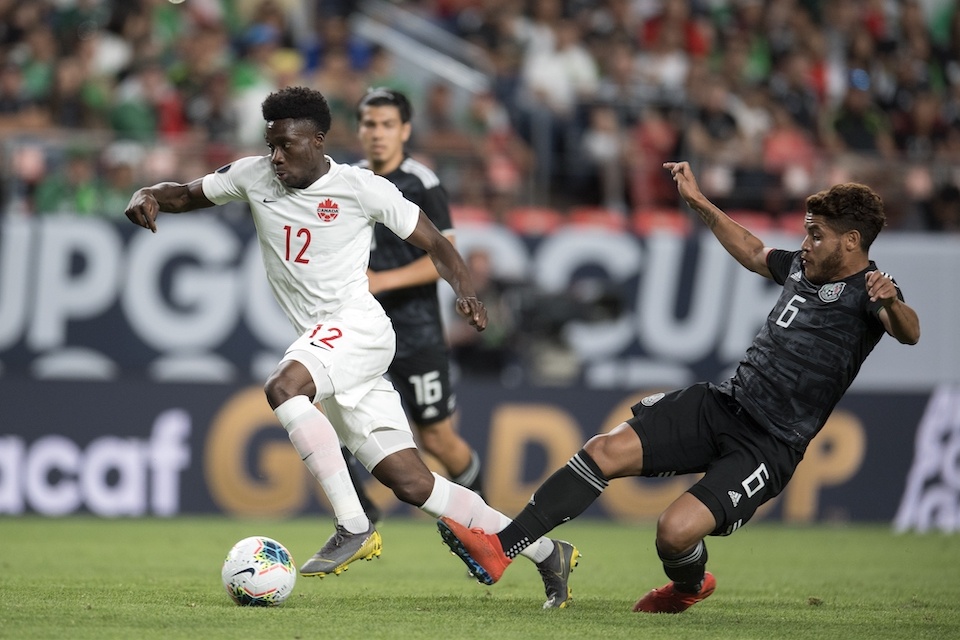 Canada in second place after 3:1 loss to Mexico at 2019 Concacaf Gold Cup

Canada in second place after 3:1 loss to Mexico at 2019 Concacaf Gold Cup

Canada remained in second place after a 3:1 loss to Mexico in the group stage of the 2019 Concacaf Gold Cup, ending a record six-game win […]

Canada remained in second place after a 3:1 loss to Mexico in the group stage of the 2019 Concacaf Gold Cup, ending a record six-game win streak dating back to last year. With an opportunity to face the Concacaf champions for the first time since 2016, Canada’s young squad gained some important tournament experience in front of 52,874 fans at Mile High Stadium in Denver on 19 June. Lucas Cavallini was the Canada goalscorer in the second half.

Canada will need a result when they face Cuba in the group finale on 23 June at Bank of America Stadium in Charlotte, NC. The Canada-Cuba match will kick off at 18.00 ET / 15.00 PT on TSN and RDS. Extended coverage is featured across Canada Soccer’s digital channels including Facebook, Instagram and Twitter. Fans are encouraged to follow Canada Soccer’s Men’s National Team every step of the way by using the social media handle #CANMNT.

“A good test for us and never happy to be on the losing side but we learned a lot about ourselves and particularly the Mexicans,” said Men’s National Team Head Coach John Herdman. “We will have a very strong and fresh line up against Cuba ready to get the points we need to take us through to the quarterfinals.”

Through two matches, Canada have a win and a loss with five goals scored and three conceded. Alongside the Cavallini goal, Jonathan David (two), Junior Hoilett and Scott Arfield have also scored for Canada. On Wednesday, young David also picked up an assist on the Cavallini goal.

“I thought we were organized as a team and were unfortunate to give up the first goal before half, which kind of opened things up,” said Canada captain Atiba Hutchinson. “Toward the last 15-20 minutes we created more and we take a lot of positives for that. Overall we will learn our lessons from this game and look forward to our next opportunity. Moving forward in this tournament we have to continue to play the way we’ve been playing and continue to do what we’ve been doing and we’ll be ready.”

Canada came out in a defensive formation in the opening minutes of the first half and Mexico spent the first fifteen minutes in possession without any real opportunities. The compact 5-4-1 defensive lineup allowed Canada to keep Mexico in front of them and shots from outside the box. In attack, Canada found some space in the middle of the field, drawing fouls in dangerous areas but were unable to test Mexican goalkeeper Guillermo Ochoa. With Canada briefly reduced to ten men with Derek Cornelius temporarily on the sideline, Robert Alvarado opened the scoring in the 40th minute after a defensive scramble wide and a failed clearance.

Canada’s best chance of the half came minutes later after a save by Milan Borjan with his long throw to Lucas Cavallini putting the striker in on goal before his shot was saved.

After a similar start to the second half with Canada compact and defending Mexican possession, Alphonso Davies found some space to get Canada’s best chance of the match. However, just a minute later Mexico’s Andres Guardado doubled Mexico’s lead to two goals on a left footed strike outside the box. With 30 minutes remaining, substitutions by Jonathan David, Scott Arfield and Jonathan Orsorio combined with a formation change to give Canada more chances.

Osorio created a chance for himself on the dribble in the 65’ and Arfield’s defensive play near the half-way line in the 67’ sparked a 4 v 3 counter with David losing possession. Osorio again came close in the 73’ putting the ball just wide of Ochoa’s post. David forced a turnover in the 74’ and drew Ochoa off of his line before sliding it to Lucas Cavallini to cut Mexico’s lead in half to 2:1. However, Mexico came back just a minute later off a defensive scramble with Guardado getting his second of the night on a deflected shot off Davies’ leg and off the post behind Borjan in the 77’.

Canada’s starting XI featured Milan Borjan in goal, Zachary Brault-Guillard at right back, Atiba Hutchinson, Doneil Henry and Derek Cornelius at centre back, Russell Teibert at left back, and Will Johnson, Mark-Anthony Kaye, Alphonso Davies, Cyle Larin and Lucas Cavallini from the midfield up through to the attack. In the second half, coach John Herdman replaced Larin with Jonathan David (57’), Teibert with Jonathan Osorio (60’), and Johnson with Scott Arfield (60’).

CANADA SQUAD & PROFILES : http://canadasoccer.com/?t=project&sid=1289
“Following a strong showing in Concacaf Nations League Qualifying, we need these tougher tests now,” said John Herdman, Canada Soccer’s Men’s National Team Head Coach. “The Concacaf Gold Cup will be important for our preparations for FIFA World Cup Qualifiers. We have a talented group, but now they will be fully tested in a tournament setting. The team are motivated to do well for Canada.”
CONCACAF CHAMPIONS