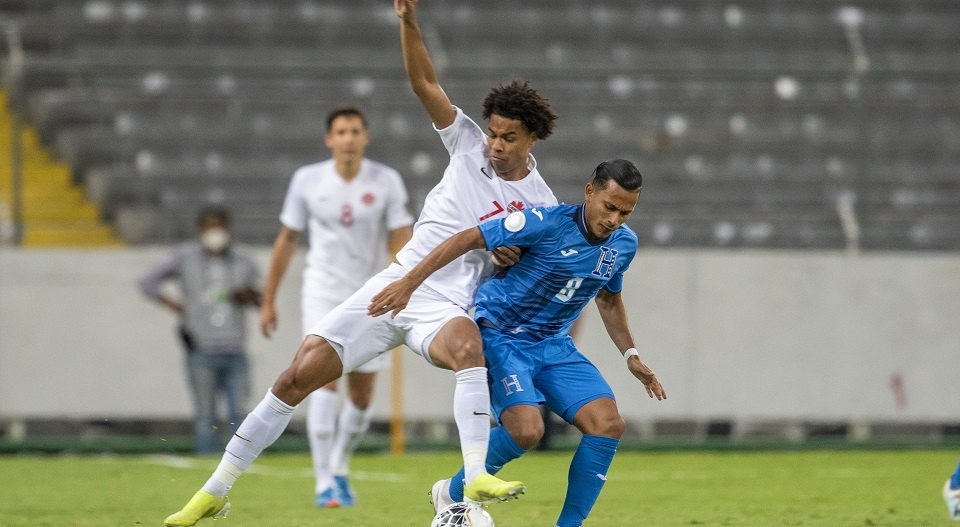 Canada have moved to within a victory of reaching the Men’s Olympic Football Tournament after a 1:1 draw with Honduras to close out the group phase in Concacaf Men’s Olympic Qualifying. With five points from three matches, Canada have moved into the Semifinal phase to face host Mexico in Mexico on Sunday 28 March.

Canada finished second in Group B after a 2:0 win over El Salvador, a 0:0 draw with Haiti and a 1:1 draw with Honduras. In the Thursday 25 March draw with Honduras, Canadian captain Derek Cornelius opened the scoring in the 28th minute on a diving header before Honduran Denil Maldonado equalised in the 30th minute. Both Canada and Honduras finished tied with five points in Group B, but Honduras finished first in the group with the better goals difference. Canada will face Mexico while Honduras will face USA in the Concacaf Semifinals.

“The fight in our players impressed me the most in the group stage of Concacaf Men’s Olympic Qualifying,” said Mauro Biello, Canada Soccer’s Men’s Olympic National Team Head Coach. “We’ve played three matches in a week and they’ve given their all for the shirt and for their country. These boys want it and while they know it is a difficult task ahead, I think it’s going to be something for which they will be ready.”

The group stage at Concacaf Men’s Olympic Qualifying provided Canada’s young players with the opportunity to face three tough Concacaf opponents who they may also face in the coming year in FIFA World Cup Qualifiers and the Concacaf Gold Cup at the international “A” level. Through an aligned Men’s National Team Program, this international tournament experience against El Salvador, Haiti and Honduras is an important next step for Canada’s young players on their journey to the Men’s National Team.

The competition also provided depth to the Men’s National Team Program as several young professional players were unavailable for Concacaf Men’s Olympic Qualifying, whether they were called into the Men’s National Team for FIFA World Cup Qualifiers or were unavailable for the whole tournament because the pre-tournament camp and opening match fell outside the FIFA International Calendar. In all, there were nine age-eligible players born 1997 or later who took part in FIFA World Cup Qualifiers this month, which for the first time ever coincided with Canada’s Olympic Qualifying campaign.

“These are the games you want with a chance to play Mexico in Mexico for a spot at the Olympic Games,” said Canada centre back David Norman. “We have a group here that’s ready to make history on Sunday.”

Cornelius had his first chance to score on a header from inside the box in the 15th minute, but his opportunity went over the crossbar. He then scored on his chance in the 28th minute on a cross from from Patrick Metcalfe. Just two minutes later, Maldonado equalised for Honduras from a header off a free kick at the other end.

Canada’s starting XI featured James Pantemis in goal, Zachary Brault-Guillard at right back, David Norman and Derek Cornelius at centre back, Marcus Godinho at left back, and Michael Baldisimo, Patrick Metcalfe, Zorhan Bassong, Tajon Buchanan, Theo Bair and Ballou Tabla from the midfield up through to the attack. In the second half, coach Mauro Biello replaced Tabla with Ryan Raposo (61′), Bair with Charles-Andreas Brym (61′), Cornelius with Lucas Dias (72′), Buchanan with Mohamed Farsi (83′), and Baldisimo with Aidan Daniels (83′).