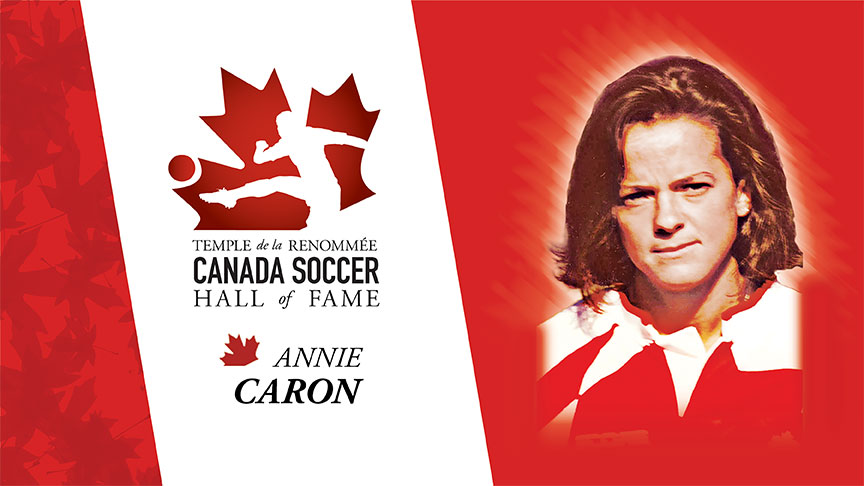 Annie Caron honoured by the Canada Soccer Hall of Fame

Annie Caron honoured by the Canada Soccer Hall of Fame

To Annie Caron and her teammates, wearing the Canada shirt meant everything. One of Canada Soccer’s original Women’s National Team players in 1986, she was one of six of those original members that also represented Canada at their first FIFA Women’s World Cup 10 years later in 1995.

“The Canada shirt of course was an honour and I was ecstatic the first time I got to put it on, but I think my most memorable time was my second selection,” said Caron. “It was in 1987 that I was given that shirt for a second time, I put it on and this time, unlike the first time where I felt like possibly I was just at the right place at the right time, the second time I had worked hard for it. I was driven, supported by family members, and was given the go ahead by everybody who was around me to go for it and try to reach this incredible journey.”

Caron is one of eight legends who has been inducted to the Canada Soccer Hall of Fame in 2021. Marking the 35th anniversary of Canada Soccer’s Women’s National Team, the eight legends represent Canada’s landmark first decade in international football from the original selections in 1986 through to Canada’s first participation at the FIFA Women’s World Cup™ in 1995. The eight inductees are Sue Brand, Annie Caron, Carla Chin Baker, Janet Lemieux, Luce Mongrain, Suzanne Muir, Cathy Ross and Sue Simon.

“The Canada shirt was a symbol for me, a symbol that I had worked hard, dedicated my time to something that I loved,” said Caron. “It was an honour and it always came with a big lump in my throat and a queasy stomach. I think every time I wore that jersey, I took the time to think back and thank the people that had helped me get there. I had a hard time ever imaging losing the privilege of wearing that number.”

Caron grew up playing her local youth soccer in Dollard-des-Ormeaux and was hooked from the moment she kicked a ball. She won league and provincial titles in Québec as well as Canada Soccer’s National Championships Jubilee Trophy with Dorval United SC in 1989. She was both a league and provincial MVP and also the Top Scorer at the 1989 National Championships. After playing for Dollard-des-Ormeaux at the youth level, she played for Vasco de Gama (1984), Beaconsfield / Lakeshore United (1985 to 1988 and 1990 to 1995), and champions Dorval United SC (1989).

“My journey started when I was six years old and I took it upon myself to sign myself up for soccer,” said Caron. “I walked home and told my parents that they had to pay $100 for this new surprise I took on. From my first game, I was hooked.”

Throughout her career, she played as a forward and later as an attacking midfielder, at one point making up Canada’s “Marvelous Midfield” with Joan McEachern on the right, Connie Cant and Geri Donnelly in the centre, and Caron on the left. Across Canada Soccer’s Women’s National Team’s early years, she twice held or shared the program’s goalscoring record (in 1988, became first Canadian with three international goals; in 1991, became second Canadian with seven international goals).

“I worked hard when no one was looking,” said Caron. “I spent a lot of my free time with a soccer ball. I thought, if I could be as close as perfect as possible, then what could my team accomplish. I think it clicked in when I realised my teammates thought the same. The ones that I met on the Women’s National Team had already put in a lot of effort in just being the best that they could be and now found themselves surrounded by others who could share a new goal of bringing women’s soccer to another level.”

Alongside her club career in Canada, she also played for John Abbott College and Concordia University, then coached at both schools. She moved to Italy and continued to play until 2004-05, first with CF San Gaetano (1997 to 2000) and finally with ACF Crespano (2002 to 2005), wrapping up her career as a player-coach.

Now back home in Canada, Caron continues to follow Canada Soccer’s National Teams and the legacy that she and her teammates built from the first Women’s National Team in 1986 to the program’s first FIFA Women’s World Cup in 1995. The program has since reached six consecutive FIFA Women’s World Cups from 1999 to 2019 and won back-to-back bronze medals at the Olympic Games.

“We had really developed as a team and we were able to prove that we were able to play on the international stage,” said Caron. “I was confident that my teammates would keep the ball rolling and push the sport even further.”

As for the current Women’s National Team heading to the Tokyo Olympic Games, she knows they are good enough to win another medal.

“To the phenomenal women who will soon represent Canada at the upcoming Olympic Games in Japan, my best wishes to all. Continue to inspire all the young players across the country. You make us proud. Go for gold!”

I would like to thank my peers for this induction into the Canada Soccer Hall of Fame. It is an immense privilege to stand amongst the mighty women who played a pioneering role in establishing women’s soccer in Canada.

I have worn many jerseys throughout my career but Canada’s #11 is the one I wore with the most pride, it was an honour to play for my country. My teammates were committed and driven, and knew how to put team before self. To all my teammates, we bonded and shared a vision, for this I am forever thankful.

I am indebted to all the coaches and teammates that stood by me, encouraging me to persevere and succeed. I cherish the many friendships made along the way and the memories that resurface as I accept this award. I thank my husband and best friend Marc, who provided me with the daily pep talks and the constant reminders that the rewards would outweigh the sacrifices.

Thank you to Neil Turnbull who always asked more of me than I thought was humanly possible. It made me take responsibility for my own performance and motivated me to do more for my team.

Finally, merci to Sylvie Béliveau for giving me the courage to dig even deeper into my reserves and come back for more. She truly brought out the best in me and allowed me to follow my passion to the end, the FIFA Women’s World Cup Sweden 1995.