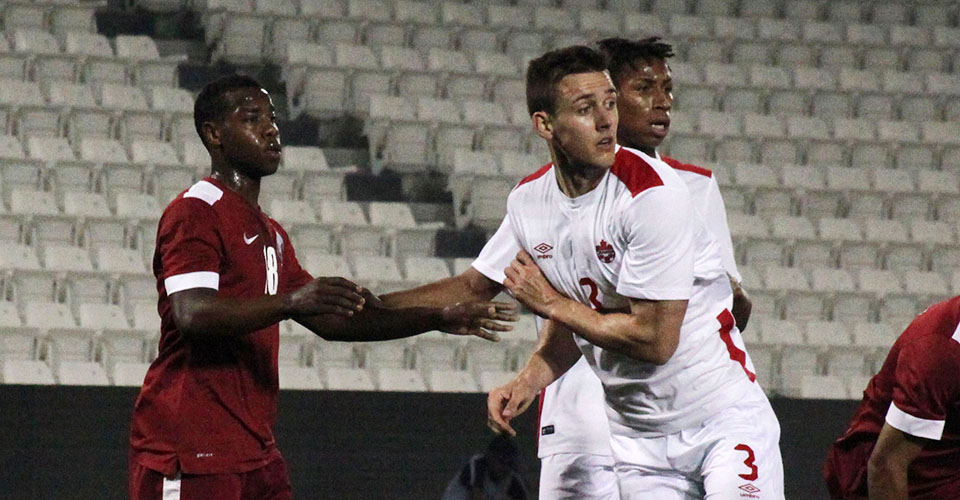 From Edmonton to Kansas to Canada

Amer Didic’s breakout season in Kansas has earned him his first call up to Canada Soccer’s Men’s National Team. The 193cm tall centre back has been included in Head Coach Octavio Zambrano’s squad for an upcoming home friendly at BMO Field in Toronto on Saturday 2 September.

“It’s been a good career start and great last few months and year no doubt,” said Didic shortly before his call up was announced. “I’m proud of my accomplishments in the USL and definitely looking to build off on that in Major League Soccer and potentially the Men’s National Team.”

Didic is one of two debutants in Zambrano’s squad for the September match, with the other 20-year old David Choinière of Impact Montréal FC. In camp, Didic joins centre backs Dejan Jakovic of New York Cosmos and Manjrekar James of Vasas Budapest in Hungary.

Didic has already gained valuable experience from playing in CONCACAF Champions League and a call-up to the Men’s National U-23 side in March. He was then officially signed by the Major League Soccer side, becoming the second Canadian on the roster alongside Tyler Pasher.

Didic gives special praise to his father Zehrudin, who played soccer in Bosnia before joining the military, as his biggest influence for playing the sport. From his earliest days, the young Amer Didic remembers being immediately immersed in the Edmonton soccer community.

“Soccer has always been part of my life and I started playing at about age four,” said Didic. “My dad always had me either going with him to watch a local game in the city or going to every other opportunity, be it soccer camps or clubs.”

Like many young soccer players, Didic didn’t originally start out as a defender, nor was it a position he necessarily wanted to play.

“Growing up I started out playing forward or midfield, but never playing in defensive positions.That trend continued during my first year of college (Baker Wildcats University in Kansas). The change came in second year when my coach thought I had the ability to play in the backline. From then on, I’ve put all of my energy into this role.”

With Canada Soccer’s Men’s National Team in late August and September, Didic will join an Alberta contingent that includes Nik Ledgerwood of Lethbridge, Samuel Adekugbe of Calgary, and both Tosaint Ricketts and Alphonso Davies of Edmonton.

He will also get to catch up with Mark-Anthony Kaye and Michael Petrasso who he met with Canada’s U-23 squad in Qatar. Both Kaye and Petrasso were part of Canada’s young and exciting team at the 2017 CONCACAF Gold Cup.

“Watching the Canadian team during the CONCACAF Gold Cup was very positive for Canadians, especially with the young guys getting an opportunity to test themselves against the best in CONCACAF,” said Didic. “I’m excited to be involved and it’s been one of my goals in last couple years – to be a part of Canada Soccer’s Men’s National Team.”

So what can Canadian soccer fans expect from Didic when he gets his chance to wear the red and white?

“Here at Sporting Kansas City and with Swope Park Rangers, we are coached and encouraged as defenders to bring the ball out of the back on a regular basis,” said Didic. “That, along with being aggressive and using my height to my advantage in both attack and defence, are the skills I’d like to think I’ve been developing well that can serve the Men’s National Team, especially as our nation continues to build with all our younger players.”

Didic and Canada will be in action at BMO Field on 2 September 2017, with the match broadcast coast to coast on TSN.

CANADA IN TORONTO ON 2 SEPTEMBER
Canada Soccer’s Men’s National Team returns to Toronto to face CONCACAF Gold Cup finalists Jamaica on Saturday 2 September. The Toronto match serves as a re-match from the Canada-Jamaica quarter-final match at the CONCACAF Gold Cup. Tickets to the Men’s International Friendly match start as low as $20 (plus applicable fees) and can be purchased online via Ticketmaster.ca, by phone at 1.855.985.5000, or in person at the BMO Field Box Office. As the match takes place during the Canadian National Exhibition (CNE), all match tickets include free admission to the CNE grounds on match day. The 2 September match kicks off at 19.00 ET with complete ticket details at canadasoccer.com/tickets.

TORONTO!! Be at BMO Field on 2 September to cheer on Canada’s rising stars!