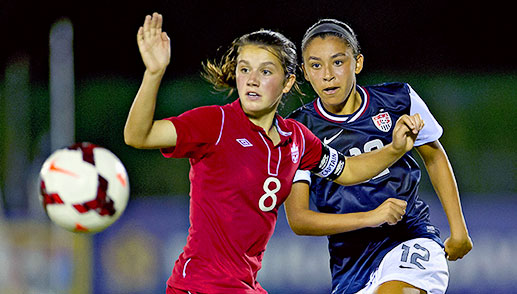 It was a busy year for young Canadian players, harbouring hopes of one-day representing their country at the senior level.

In competitive action, Canada Men’s and Women’s U-17 Teams each qualified for their respective FIFA World Cups after successful campaigns at their CONCACAF Championships. The Men’s U-20 team also participated in the CONCACAF Championship but they came just one game short of qualifying for the FIFA U-20 World Cup.

Men’s Youth Teams
Mixed in throughout the year, a variety of teams from varying age groups took part in camps and competitions in preparation for when they have to step up in search of FIFA World Cup berths and regional championships.

Tony Fonseca, Technical Director said the highlights of the year were 15 separate youth events covering over 200 camp days and involving 150 players. In addition, the technical play was delivered to all national coaches and a working relationship and collaboration was maintained with all Canadian professional clubs.

“The players involved will acquire moral and ethical values, as well as quality of program to guarantee the development of the competencies needed to play internationally,” said Fonseca.

“It has been a tremendous investment of time, energy and money to set out a plan of such scope and depth. The technical plan as many layers and it covers not just national teams but also the high performance stream providing clarity to the player development pathway.”

In February, Canada’s Men’s U-20 Team lost their opening game 1:2 to Cuba at the CONCACAF U-20 Championship. They then thumped Nicaragua 5:1 to advance to the quarterfinals. But it was there their dreams of making the FIFA U-20 World Cup were dashed when the Nick Dasovic led team lost 2:4 to USA.

It was better news in April when Canada’s Men’s U-17 Team finished in third place to earn one of four CONCACAF spots at the FIFA U-17 World Cup in the United Arab Emirates.

At the World Cup in October, the team tied Austria and Iran and lost to the eventual 4th place team in the tournament Argentina. The team was praised for its positive approach in the way they played. It was the second consecutive appearance at a FIFA World Cup for the Canadian U-17 program. Including 2011’s FIFA U-17 World Cup, the team had a 4 game unbeaten streak, never done before by any Canadian team at that level.

“The group of players in our program showed great dedication and commitment throughout the year,” said Fleming. “It was a great group to work with and they represented themselves and Canada with great honor and pride.”

Women’s Youth Teams
In the women’s program, the process of developing talent for the future, and perhaps finding some diamonds in the rough for the present, took a big step forward as a number of youngsters were moved ahead and got looks at the senior level.

“It’s been a massive year. It’s been system building,” said John Herdman, Head Coach of Canada’s Women’s National Team. “It’s all been about infrastructure building. We’ve brought in a lot of new staff. We’ve created a vision and a clear strategy for paving the foundation to ensure there is infrastructure there and there’s one aligned high-performance vision that takes place from a very young age to where they want to be which is the Canadian Women’s National Team.”

That vision yielded results in November when Canada’s Women’s U-17 Team made it to the final of the CONCACAF Championship. Coached by Bev Priestmann, the team ultimately lost to Mexico on penalty kicks in the final but they booked themselves a place in the FIFA U-17 Women’s World Cup next March and became the only CONCACAF country to have qualified for all four tournaments at that age level.

In the group stage, Canada easily got past Guatemala and Trinidad and Tobago 8:0 and 11:0 respectively before losing 0:2 to USA. They beat Jamaica 5:0 to earn their spot in the final.

2014 is set to be a big year for the women’s program. In addition to that U-17 team taking part in the FIFA U-17 Women’s World Cup in Costa Rica, the road to the FIFA Women’s World Cup Canada 2015™ gets even closer as Canada will host the FIFA U-20 Women’s World Cup. Some of those players may feature in both tournaments as the talent pool for the senior level looks to deepen in time for 2015.