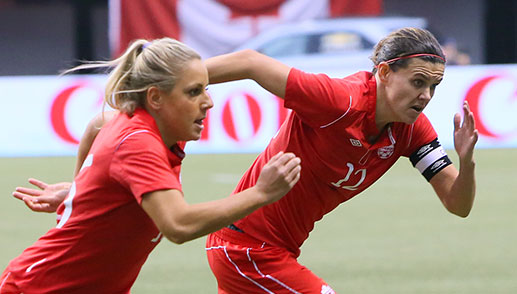 After the memorable and historic summer of 2012, Canada’s Women’s National Team took an enforced step back to reload, develop the base of the program, and hopefully build some depth that will be useful going forward.

The team started the year missing talismanic captain Christine Sinclair, who was still serving a suspension after the Olympics but she was back in the fold when the team made their annual trip to Cyprus in March for the Cyprus Women’s Cup.

January
Canada started the year in Yongchuan, CHN for the Yongchuan Cup-Four Nations Women’s Tournament involving China, Korea Republic, and Norway. Head Coach John Herdman brought a lot of new faces to camp as some very young players got a chance to play with a good variety of the Olympic medal players mixed in.

The opening game of the tournament on 12 January came against the hosts as Adriana Leon marked her debut at the senior level with her first goal as Canada hung on for a slight 1:0 victory.

Two days later, Canada fell behind after conceding the first three goals against Korea Republic. They got one goal back when Nichelle Prince got her first goal at the senior level but that was as close as they got as Canada lost 1:3 in a first ever defeat to Korea.

Against Norway in their final game of the competition, Canada needed a win to claim the tournament title but they couldn’t find the goal that would vault them ahead of Norway and had to settle for second place with a scoreless draw.

March
There was still one game left on Sinclair’s suspension as Canada made their annual pilgrimage to the Mediterranean nation of Cyprus. Kadeisha Buchanan and Ashley Lawrence impressed enough in January to merit a second camp with the senior team and Canada got their Cyprus Cup campaign off on the right foot with a 2:0 win over Switzerland. Sophie Schmidt scored in the second minute and Diana Matheson added the second with just over 10 minutes remaining.

The second game of the tournament marked the return of Sinclair and she got right into the mix scoring the winner in the 37th minute as Canada beat Finland 2:1. Canada had gone down in the sixth minute but Jonelle Filigno tied the game on the half hour mark.

With their spot in the final assured, Canada took on the Netherlands and nearly went down a goal but goalkeeper Erin McLeod stopped a penalty to keep the game scoreless. Late in the first half, Sinclair got her second goal of the tournament and Canada held on for a 1:0 win.

In the final, Canada played a very strong English side and the game was close for the most part until England found a winner in the 70th minute, which meant Canada had to settle for second place at the Cyprus Cup for a second year in a row.

April
The European swing continued into April as two more friendlies were lined up against France on 4 April in Nice, and England on 7 April in Rotherham.

In a rematch of the bronze medal game from the London Olympics, Canada went down late in the first half but right on the stroke of full time, Kaylyn Kyle scored to give Canada a 1:1 draw.

The game against England was similar to the one played in Cyprus where Canada and England were in a very even encounter, but once again Canada went down to a late goal and lost 0:1.

June
Without a doubt the most anticipated game of the year, Canada took on USA at BMO Field on 2 June in the rematch of the memorable game in London. Canadian fans were all over this one, as tickets sold out in astonishing three hours. The crowd – the largest soccer attendance ever recorded at BMO Field – was electric but the Americans came away as 3:0 winners. Despite the result, Canada was officially introduced to Kadeisha Buchanan. Not even 18 at the time, Buchanan had to mark legendary USA striker Abby Wambach and did a very effective job.

They then took a trip over to Paderborn, GER to take on the Germans on 19 June at the Benteler Arena. Mélissa Busque and Rachel Melhado made their international debuts, which brought the number of players who made their first appearances for Canada to 11 in 2013.

October
Edmonton will be Canada’s home for most of the group stage of the FIFA Women’s World Cup Canada 2015™ and the team got a look at their future home with a camp prior to a friendly at Commonwealth Stadium in the City of Champions and a friendly with Korea Republic. The camp saw Kara Lang return to join the team as she continues her road to recovery in the hopes of rejoining the team in time for Canada 2015.

Against Korea Republic, Christine Sinclair opened the scoring in the 23rd minute off a Diana Matheson corner kick. Brittany Baxter scored with six minutes left in the half and Adriana Leon added her second goal of the year in the 69th minute as Canada won 3:0 in front 12,746 fans on a chilly fall evening on 30 October.

November
Vancouver was the site of some very happy memories as it was where Canada’s Olympic odyssey started in January of 2012 as the site of the Olympic qualifying tournament. Once again the Vancouver supporters turned out by the thousands on 24 November but Canada couldn’t find the breakthrough despite plenty of chances and had to settle for a scoreless draw with Mexico in front of 21,217 fans at BC Place Stadium.

December
The year was rounded off with an appearance in the Torneio Internacional de Futebol Feminino in Brazil’s capital, Brasilia. The first game of the tournament was a special event as it was Christine Sinclair’s 200th appearance for Canada. Naturally she got on the scoreboard as she scored Canada’s second goal in a 2:0 win over Scotland. Leon’s third goal of 2013 opened the scoring and Sinclair missed a penalty late in the first half before getting a goal from open play in the second half.

Canada’s second game was against a Chilean team that had been inactive since 2011 prior to this tournament. A Chilean goal late in the first half was the only scoring in the game and Canada lost with a 1:0 shock result.

The team then battled against the host Brazilian team. Canada saw Lauren Sesselmann get sent off with about 15 minutes to go, but still they looked like they had a winner against a team where there’s always a close game. Unfortunately, that goal just never came and the 0:0 draw wasn’t enough for Canada to secure a spot in the tournament’s final.