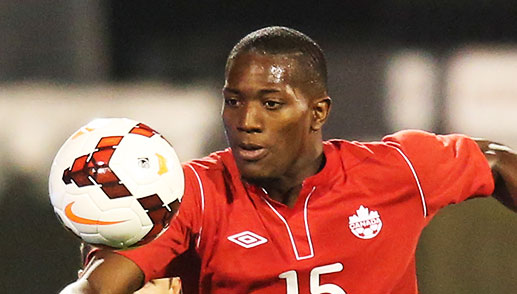 2013 was a year of massive transition and overhaul as Canada’s Men’s National Team moved on from elimination from qualifying for the 2014 FIFA World Cup™ in 2012 and started to set its sights on qualifying for 2018. Benito Floro was appointed Head Coach in July, setting in motion a new direction for Canadian men’s soccer.

January
Colin Miller was named interim Head Coach for two January friendlies in the southern United States. Miller had a lot of young talent in camp with some veterans mixed in as Canada lost 0:4 to Denmark in Tuscon, AZ before heading to Houston where they played the United States to a scoreless draw.

March
Two months later, Tony Fonseca was in charge as Canada went to the Middle East for a pair of tough friendlies against Japan and Belarus in Doha, Qatar. Marcus Haber had the only goal for Canada as they acquitted themselves well against the Brazil-bound Japanese but it was in a 1:2 losing effort on 22 March. Three days later they lost 0:2 to Belarus.

May
Miller was back in charge as he pulled double-duty as he coached both Canada and FC Edmonton of the NASL in May. Canada took on Costa Rica at Commonwealth Stadium in Edmonton in what was Canada’s final international friendly before the CONCACAF Gold Cup in the USA.

Just over 8,000 fans were on hand as Costa Rica eked out a narrow 1:0 victory over Canada thanks to a goal from the penalty spot in what was an otherwise even contest.

July
There wasn’t much good fortune as they limped into the Gold Cup seemingly with a player falling victim to a new misfortune just about every day. Defender Nana Attakora couldn’t make it into camp with a concussion and speedy forward Randy Edwini-Bonsu had to pull out on the eve of the team’s opening game of the tournament against Martinique with an injury.

Playing in hot conditions at the Rose Bowl in Pasadena, California, Canada gave up a late goal and lost 0:1 to Martinique. Team captain Will Johnson and Russell Teibert both played through illness and had to leave the camp as Canada went into Seattle to take on Mexico at CenturyLink Field, where they lost 0:2 in a game where Canada had some decent scoring chances but went down to a goal off a corner kick and a dubiously-won penalty.

A scoreless draw in their final game against Panama wasn’t enough to get Canada through to the knockout round but change was in the air as, prior to the start of the Gold Cup, it was announced that Floro would be taking over as full-time coach in August with a first camp to come in Spain in September.

September
In his first camp in charge, Floro brought in more than 30 players to Oliva, Spain, in what was the beginning of a major learning process for players and staff. Canada had two friendlies lined up against African side Mauritania. In the first game, Canada controlled much of the play but couldn’t find the back of the net and settled for a scoreless draw. Just a few days later, they fielded a completely different lineup and again dominated but Mauritania scored on one of their lone forays forward and beat Canada 1:0.

October
Canada continued their development under their new Head Coach in October, training out near Heathrow Airport in London at the training ground of English Championship side Queen’s Park Rangers. Included in the camp were Dylan Carreiro and Michael Petrasso, who were both members of the QPR system. They took part in the camp but weren’t available for Canada in the friendly they had lined up against Australia at Craven Cottage, the home stadium of Fulham Football Club.

Up against a team that had qualified for the 2014 FIFA World CupTM, Canada went down a goal in the first minute but fought back well and were unlucky not to have scored at least an equalizer as they forced some fine saves out of the Australian goalkeeper in the first half. The second half saw a number of changes as younger players were brought in. Canada conceded twice more and went down 0:3 in a game where the result wasn’t indicative of the play.

November
Canada concluded 2013 with a camp in Bad Waltersdorf, AUT and a pair of games against the Czech Republic and Slovenia. The team traveled to Olomouc, CZE for the first game of the camp on 15 November. Once again, they were victims of the early goal but were unlucky not to have scored the equalizer when Dwayne De Rosario had a penalty kick saved and a number of good chances just missed.

Canada held its own against a quality Czech side but eventually conceded a second goal and went down 2:0.

Four days later, Canada came up against another top-30 side in Slovenia and Canada was denied in the first half when Dwayne De Rosario had a well-placed shot saved spectacularly by Slovenia goalkeeper Jan Oblak. AC Milan forward Valter Birsa scored the winner in the 52nd minute and Canada ended a difficult year with another disappointing result but with clear indications that this long-term project is making some good steps heading into 2014.