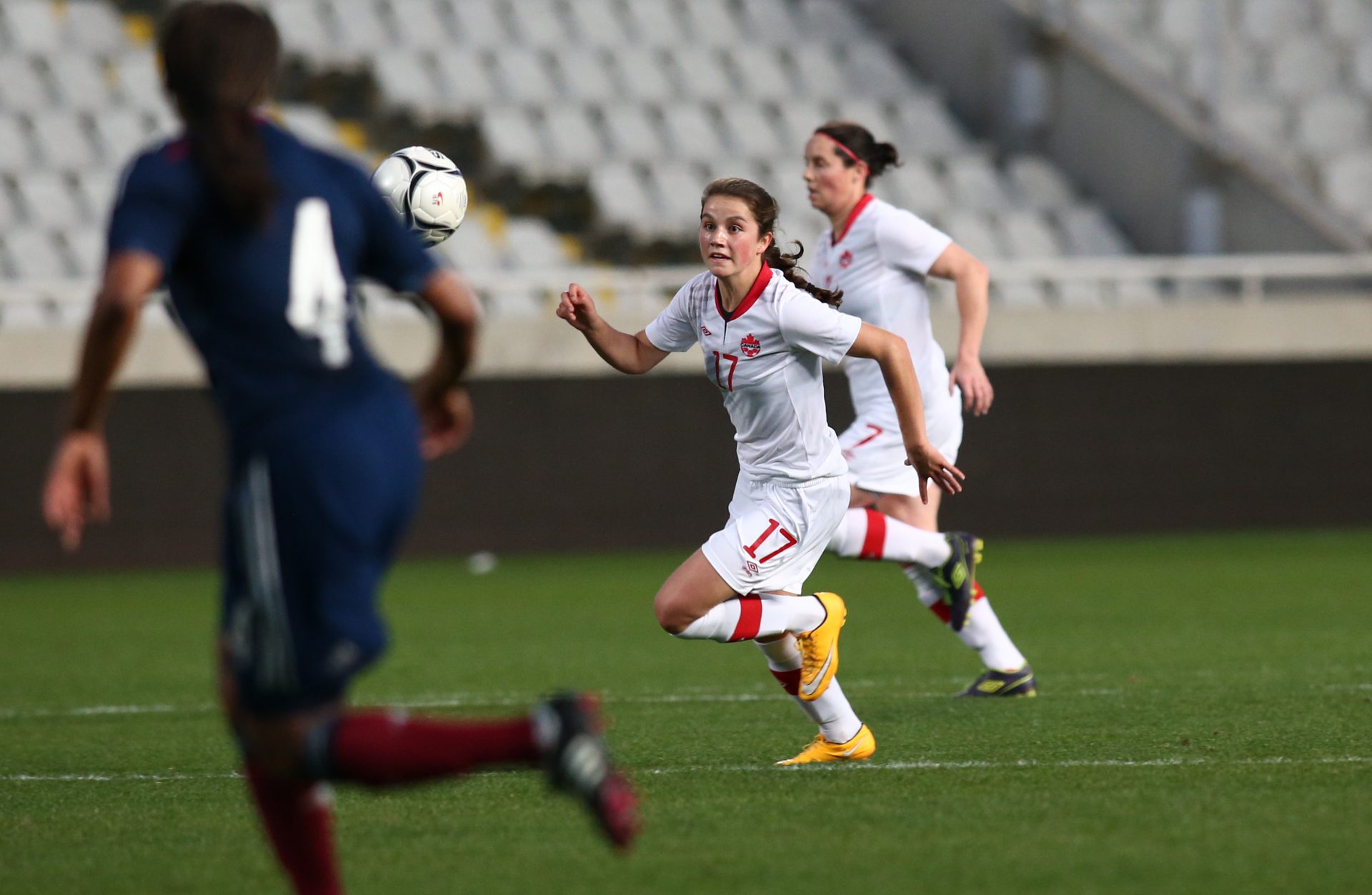 For Fleming, scoring at a Women’s National Team match is exciting, but she’s remaining grounded.

Canada launched its Cyprus Women’s Cup bid with a 2:0 win over Scotland in Nicosia.

The pivotal moment in the match came early, in the third minute, when a superb cross from Christine Sinclair found Jessie Fleming as she slid past the Scottish defence to find the back of the net. In a moment that perfectly captures Head Coach John Herdman’s vision for this team, Canada’s captain seemed to use a sixth sense to find the 16 year old rookie, assisting Fleming in her first goal as a member of Canada’s Women’s National Team.

“Jessie put everything in to get that goal and the vision from Sinclair was phenomenal. Not many women can see that pass,” said Herdman. “What a great start for that 16 year old and we wanted that for her. She’s been working really hard on trying to break the box for us and to get in to those goal scoring positions. So to see her sliding in with every sinew to get a toe on it was fantastic.”

For Fleming, scoring at a Women’s National Team match is exciting, but she’s remaining grounded.

“It’s such an honour (to play with this team) and I’m so grateful every time I get invited back in to camp and get to step on the field with these guys it’s pretty incredible,” she said after the Scotland match. “I always wanted to play for Canada; I think every little girl growing up in Canada does… It’s going to pretty exciting leading up to the World Cup.”

Canada dominated much of the Scotland game, and consistently delivered controlled attacks in to the Scot’s end. It was one of those controlled attacks that led to Canada’s second goal, under ten minutes into the second half, when a pass from Rhian Wilkinson found Sinclair in front of the net. In typical Sinclair fashion, she picked her spot and delivered a one-timer that didn’t give the Scottish keeper any chance to get behind it.

“Plays like these gives you a chance to be successful in a World Cup,” Herdman added about Sinclair’s assist and goal. “You’ve got Sinclair scoring, Sinclair providing – she did it in the Aussie scrimmage as well – we’ve just got to keep her here, on top of her game.”

Canada’s win in their first match of the Cyprus Women’s Cup continues their unbeaten streak to seven.

The 4 March match was played at GSP Nicosia and was the first of three group stage matches at the 2015 Cyprus Women’s Cup. Canada will continue their group stage with matches against Korea Republic on 6 March and Italy on 9 March. Every team will play on the final match day, 11 March with the group stage determining in which match they will complete.

The 2015 Cyprus Women’s Cup, running 2-12 March, will be Canada’s last chance to compete in a tournament format until this summer’s FIFA Women’s World Cup Canada 2015™.