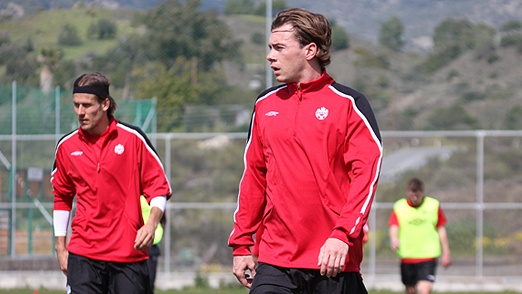 Canada will enter Saturday’s 26 January’s Men’s International Friendly against Denmark fully aware of the uphill battle that lies ahead.

“Any player who puts on a Denmark strip is a quality player,” said interim Canadian Head Coach Colin Miller.

“We know that. We understand that. Our defensive organization will be important.”

Canada will take on the Danes on Saturday in a friendly at Kino Veterans Memorial Stadium in Tucson, AZ (local kick-off 13.00) with the match being live-streamed in Canada at Sportsnet.ca (15.00 ET / 12.00 PT).

Fans will also be able to follow the match on Twitter: @CanadaSoccerEN, as well as enjoy full pre and post-match coverage on CanadaSoccerTV.

Interim coach Miller has asked his played to fully commit themselves to the team’s training camp in Scottsdale, AZ in advance of the clash with Denmark – and the players have responded well to the call.

“I have put some demands on the players in terms of their attitude and their approach to the game and it’s been very positive,” Said Miller.

“The guys have been a joy to work with.”

Canada has fielded its youngest squad since May 2006 for the January camp in Arizona and Texas.

Saturday’s match, Canada’s first of the 2013 season, is likely to feature a number of young players making their first international appearances at the senior level.

Toronto FC midfielder, and recent first-overall pick in the MLS Superdraft, Kyle Bekker, is amongst the youngsters looking to get his first cap for Canada.

“Being my first time with the Men’s National Team, it’s been amazing,” said Bekker.

“If I get some minutes, I just want to show what I can do. Hopefully we can get a result.”

Following the Saturday match in Tucson, AZ – Canada will travel to Houston, TX for a subsequent friendly on Tuesday 29 January against USA (local kick-off 20.00) to be broadcast on Sportsnet (21.00 ET / 18.00 PT)