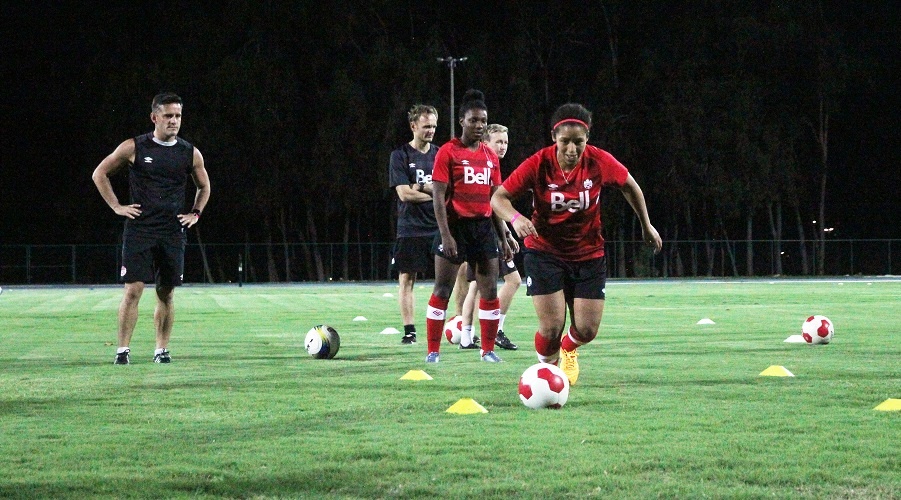 The team will convene Friday, 20 January in Los Angeles for its first training camp of 2017.

Canada Soccer’s Women’s National Team will return home for Canada Soccer’s bronze medal celebration match Saturday, 4 February in Vancouver against Mexico, but before it does the team will convene Friday, 20 January in Los Angeles for its first training camp of 2017.
The training camp will serve as a reorientation and conditioning camp for core members of Canada Soccer’s Women’s National Team and as a key opportunity to assess additional players, some who have previously made senior team appearances as well as new faces who have come up through Canada’s EXCEL program.
“This training camp is an important step for us as we are at the beginning of a four-year cycle that will culminate at the 2020 Tokyo Olympics, so we are keen to use this time to assess both existing and new players coming up through our EXCEL development pathway,” said Head Coach John Herdman. “This camp is about introducing and evaluating those players, physically testing the core squad, and creating connections both on and off the pitch.”
Since the implementation of Canada Soccer’s EXCEL Program four years ago, the quality of experience for young, talented Canadian female players has improved. Gaining experience in the National Team environment is a key step in preparing the next generation of players by providing them with the tools to meet the demands and rigors of the ever improving international women’s game.
With three highly-decorated, veteran players retiring (striker Melissa Tancredi and defenders Rhian Wilkinson and Marie-Eve Nault) Canada Soccer is in a position to rejuvenate the Women’s National Team with talent cultivated through a system that has already proven successful in developing many of Canada Soccer’s current bronze medalists including Kadeisha Buchanan, Ashley Lawrence, Jessie Fleming, Rebecca Quinn, Janine Beckie, Shelina Zadorsky, Deanne Rose, and Gabrielle Carle.
Herdman envisions great things to come from the next group as Canada Soccer continues the approach of developing players by design to meet future positional openings as the team senior team evolves.
“Many of the young players coming into this camp have just experienced FIFA youth international competition, so bringing them into the Women’s National Team environment now continues their development and gives them more opportunities to grow as players within the Canadian system,” said Herdman. “Giving young players this experience is an important part of their development and provides a critical assessment touch point for our technical staff.”
The beginning of 2017 marks the start of an exciting four-year period for Canada Soccer as Canada’s Women’s National Team seeks to rise from fourth place to first in FIFA’s World Rankings. This goal was set for Canada by Herdman after Canada repeated its bronze medal finish at the Rio 2016 Olympics.

Upcoming Canada Soccer Women’s National Team home match
Canada Soccer’s Women’s National Team will play at home for the first time since capturing back-to-back bronze medal at the 2016 Rio Olympics when they take on Mexico in an international friendly in Vancouver on Saturday, 4 February 2017 at BC Place.
The match will be a celebratory homecoming for Canada’s soccer heroes, after they became the first Canadian team in over a hundred years to repeat a podium finish at a summer Olympics, and the final home match for retiring players.
Individual tickets to the Canada v Mexico match are on sale via Ticketmaster.ca. Tickets to the match start as low as $20 (plus applicable fees) and fans will once again be able to take advantage of a ‘Me+3’ offer in select sections.