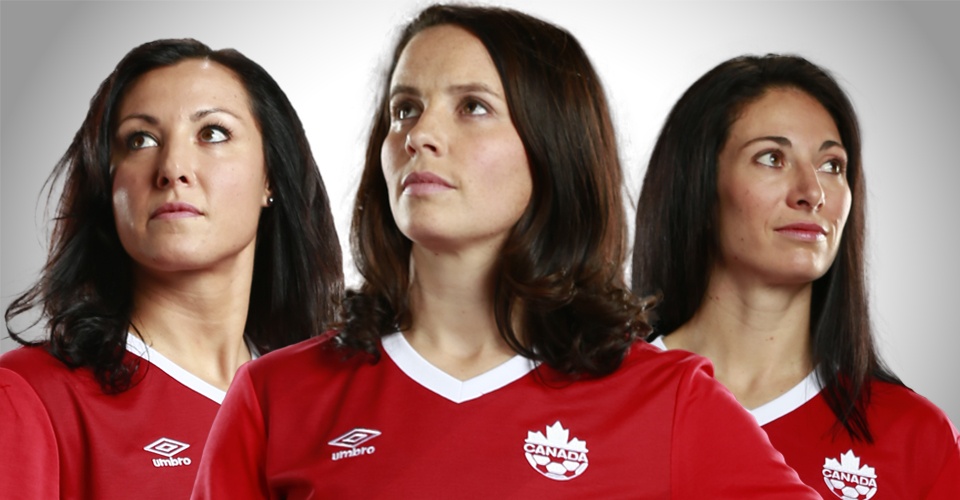 The three Canadian soccer stars will all be celebrated this 4 February 2017 at Canada Soccer’s Bronze Medal Celebration Match in Vancouver.

A trio of Canada Soccer heroes will hang up their boots after international careers that included back-to-back Olympic bronze medals in London and Rio. The three Canadian soccer stars – Rhian Wilkinson, Melissa Tancredi, and Marie-Eve Nault – will all be honoured this 4 February 2017 at Canada Soccer’s Bronze Medal Celebration Match in Vancouver.

“On behalf of Canada Soccer, we thank these three players for their years of commitment and dedication and wish them nothing but the best in the future,” said Peter Montopoli, Canada Soccer General Secretary. “They have helped Canada Soccer’s Women’s National Team become our country’s most celebrated summer Olympic team sport of all time. For our fans, our Bronze Medal Celebration Match in Vancouver provides us all with one more chance to say thank you to these incredible women.”

Wilkinson (Pointe-Claire, QC), Tancredi (Ancaster, ON), and Nault (Trois-Rivières, QC) are all CONCACAF champions, FIFA Women’s World Cup finalists, and Olympic bronze medal winners. The three players combined to represent Canada in 374 international matches.
“These women are leaders, role models and ambassadors for this game; they have driven this team to success in their own unique ways and we will miss them immensely,” said John Herdman, Canada Soccer’s Women’s National Team Head Coach. “Their achievements on the pitch speak for themselves. They dedicated their life to this team and I’m just fortunate to have had the chance to work with them. This isn’t the end for these women. I genuinely believe it is just the beginning and I’m excited to see what else they are going to achieve in their lives”.

Wilkinson has made 180 appearances for Canada from 2003 to 2016, including four straight FIFA Women’s World Cups. She played (and won medals) in six CONCACAF championships and played in three Olympic Games. Alongside winning a CONCACAF title and two Olympic bronze medals, she won a Norwegian Toppserien league title at the professional level in 2012. A two-time winner of Sport Québec’s Le Maurice, she also won Québec Soccer’s professional or senior player of the year six times. In 2012, she was named to Canada Soccer’s All-Time Canada XI.

Tancredi had made 124 appearances for Canada from 2004 to 2016, including three FIFA Women’s World Cup finals. She played (and won medals) in six CONCACAF championships and played in three Olympic Games. From an international career that has counted 27 goals, she scored the winner that qualified Canada for both the Beijing 2008 and London 2012 Olympic Games. In 2012, she won the Golden Horseshoe Athlete of the Year.
Both Wilkinson and Tancredi will dress one last time for Canada on 4 February 2017 against Mexico. Of note, Wilkinson is ranked third all time amongst Canadian in international appearances while Tancredi is ranked fifth all time amongst Canadians in goals scored.
Together on the pitch at London 2012, they combined for one Canada’s most important goals in the group phase against Sweden, with Wilkinson providing an electrifying run down the right before her cross was headed home by Tancredi. The entire sequence moved through six Canadian players, with Nault providing the initial pass in the build up.
Nault made 70 appearances for Canada from 2004 to 2016, including the FIFA Women’s World Cup in 2011 and 2015. She won a CONCACAF championship in 2010 and Olympic bronze medals in 2012 and 2016. She was Québec Soccer’s junior elite player of the year in 1997 and professional player of excellence in 2014.

Canada Soccer’s Bronze Medal Celebration match is 4 February 2017 at BC Place. Tickets to the home match in Vancouver are on sale now via canadasoccer.com/tickets starting at just $20 (plus applicable fees). A special ME+3 discount offer on ticket four-packs is available in select sections while groups of 10 or more are eligible for discounts of up to 30% off regularly priced tickets. In addition, BC Place Club Seats are available for fans looking for a premium match day experience and include a complimentary Canada Soccer scarf with each ticket.