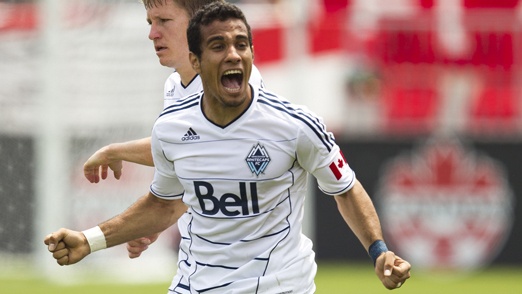 Vancouver Whitecaps FC will host defending champions Toronto FC in the first leg of the final of the 2012 Amway Canadian Championship at 19.00 PT on Wednesday 16 May at BC Place in Vancouver, BC.

The first match of the final will be televised live on Sportsnet ONE featuring a half-hour pre-game show with the broadcast set to begin at 21.30 ET / 18.30 PT. Fans can also follow the match on Twitter at @CanadaSoccerEN. Complete post-match coverage will be available at CanadaSoccer.com/Championship; video highlights will be available via CanadaSoccerTV.

Toronto earned the right to defend its title for a fourth consecutive season by mustering up a 2:0 win over Impact Montréal in the second leg of the semi-final between the two teams.

After battling Montréal to a 0:0 away draw on 2 May, Toronto returned to BMO Field and fought their way to a two goal victory despite playing the majority of the match with only 10 men after defender Richard Eckersley was sent off in the first half.

Whitecaps FC powered past FC Edmonton by a score of 5-1 over two legs to reach the final where they will look to avenge a narrow loss to Toronto in the 2011 Championship Final.

The ‘Caps picked up a 2:0 victory on the road in Edmonton to open this year’s competition before overcoming a nervy start in the second leg to cruise to a 3:1 victory over the ‘Eddies back in Vancouver.

The winner of the 2012 Amway Canadian Championship will receive the Voyageurs Cup, the most prestigious trophy in Canadian club football.

The winning team will also go on to represent Canada in the 2012-13 CONCACAF Champions League. For complete information on the 2012 Amway Canadian Championship, please visit CanadaSoccer.com/championship