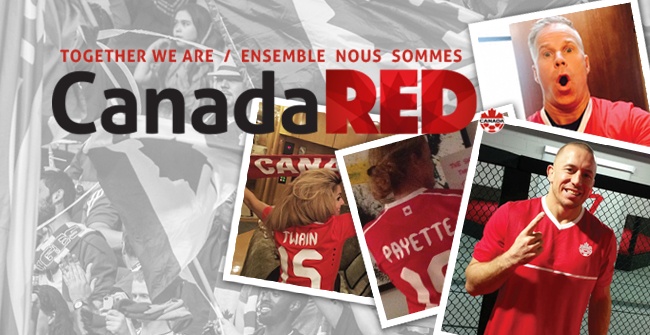 Wear your CanadaRED – this Friday… next Friday… and on Friday the 13th!

Wear your CanadaRED – this Friday… next Friday… and on Friday the 13th!

In just over two weeks, Canada will open the next round of FIFA World Cup™ Qualifiers on Friday the 13th (that’s Friday 13 November) in Vancouver, BC. As always, Canadian supporters will be encouraged to wear red to the game in support of our Men’s National Team.

To help build momentum on the Road to the 2018 FIFA World Cup Russia™, Canada Soccer is encouraging fans to also wear #CanadaRED on the two Fridays before the big game against Honduras. So starting this Friday the 30th (the day before Hallowe’en), wear some red throughout the day – in the morning while enjoying a healthy breakfast, during the day while at work or on the school playground, and in the evening while rocking that prize-winning costume at your best friend’s Hallowe’en party!

Take a #CanadaRED photo and share it via social media for a chance to win an autographed Canada jersey!
So whatever #CanadaRED you are wearing for the next two Fridays before our big match, take a picture and share it with us via Instagram (@canadasoccer), Twitter (@CanadaSoccerEN), or Facebook (CanadaSoccer). Also be sure to tell your friends and family to do the same as we build a Canadian sea-to-sea-to-sea of red in support of Canada’s national soccer team.

We will select one “best photo” winner each Friday before the match to receive an autographed Canada jersey. Photos should be shared with the hashtag #CanadaRED; deadlines are 23.59 PT on 30 October 2015 and 23.59 PT on 6 November 2015. The winner will also have to correctly answer a skill-testing question. The contest is open to Canadian residents and void where prohibited.

Canada’s Road to Russia 2018
Canada is on the road to the 2018 FIFA World Cup Russia™ facing Honduras in a crucial match on Friday 13 November at BC Place. The team is calling on all Canadians to be the 12th man and rally together as we collectively build a sea of #CanadaRED support. Get your tickets at Ticketmaster.ca.

The 2018 FIFA World Cup Russia is the biggest single-sport event in the world. From 12 remaining nations in our region, only three or four will qualify for the finals, so we need all the #CanadaRED support that Canada’s National Team deserves.