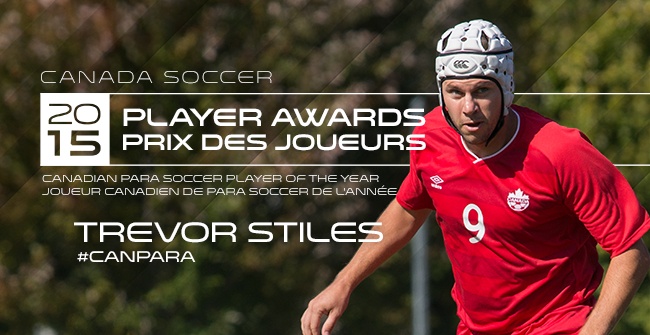 Stiles is Canada’s all-time leader with 29 goals in 25 international matches.

Canada’s top goalscorer Trevor Stiles has been named the 2015 Canadian Para Soccer Player of the Year. The 34-year old international footballer from Victoria, BC was honoured with the selection made by the Canada Para Soccer coaching staff.

“Trevor played a large role with the team, so depending on how the match was progressing, he could play as a goalkeeper or a striker,” said Canada Para Soccer coach Drew Ferguson. “We also believe that had he not been injured at the Toronto 2015 Parapanamerican Games, we would have brought home a medal for Canada.”

Stiles is the third different winner of the Canadian Para Soccer Player of the Year since the award was inaugurated in 2012, with Brendon McAdam (2012) and Liam Stanley (2013, 2014) the previous winners.