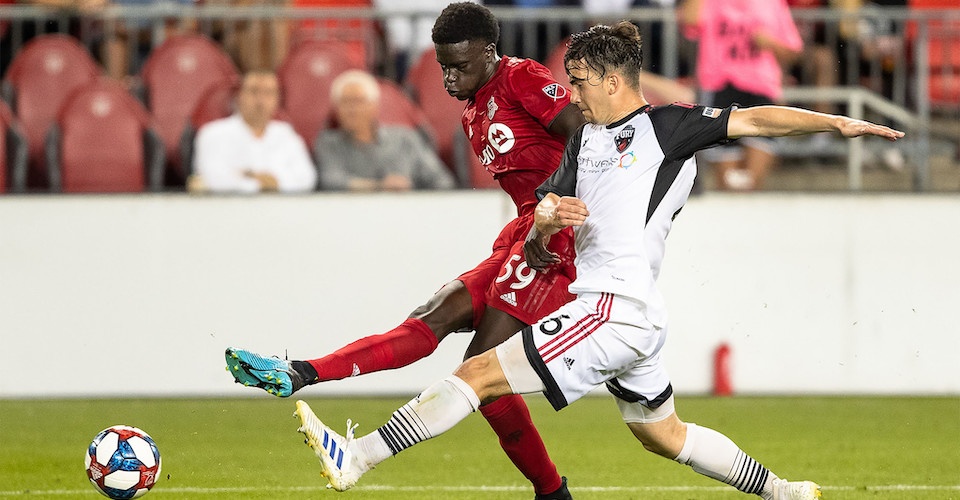 Toronto to meet Montréal in 2019 Canadian Championship Final this September

Toronto to meet Montréal in 2019 Canadian Championship Final this September

Toronto FC will meet the Montréal Impact in the 2019 Canadian Championship Final in September. The two old rivals will face each other for the right […]

Toronto FC will meet the Montréal Impact in the 2019 Canadian Championship Final in September. The two old rivals will face each other for the right to lift the Voyageurs Cup and represent Canada in the 2020 edition of Concacaf Champions League. The two legs will be played 18 September at Stade Saputo in Montréal and 25 September at BMO Field in Toronto.

This will mark the third time since 2014 that Toronto and Montréal have faced each other in the Canadian Championship final. Patrice Bernier helped Montréal lift the Voyageurs Cup in 2014 and then Sebastian Giovinco scored a brace to capture the title for Toronto in 2017.

In the 2019 Semi-finals, Toronto opened the Wednesday night activity with a 3:0 win over Ottawa Fury FC at BMO Field. Toronto won their series 5:0 on aggregate across the two legs. Toronto’s Man of the Match Nick DeLeon scored a brace and added an assist on the Patrick Mullins goal. Canadian Richie Laryea assisted on the opening goal, young midfielder Liam Fraser led his club with 80 touches and 65 passes, veteran Jonathan Osorio made his 20th Championship appearance (second all-time in the competition), and teenager Noble Okello made his first-team debut with Toronto FC.

In Montréal, the Impact won away 1:0 over Calgary at Spruce Meadows Stadium to capture the series 3:1 on aggregate. Anthony Jackson-Hamel scored the lone goal on a first-half header from a Saphir Taïder corner kick. For Jackson-Hamel, it was his third career Championship goal in seven matches since 2015. Calgary’s homegrown centre back Dominick Zator, meanwhile, set a single-year record with 720 minutes played while 16-year old Calgary teenager Aribim Pepple became the second-youngest player to feature in the Canadian Championship.

With 12,683 fans in Toronto and 5,633 fans in Calgary (a new Cavalry FC record), attendance for the 2019 Canadian Championship has set a single-year record with 122,226 cumulative spectators. Across 100 matches since the competition’s debut in 2008, there have been over one millions fans that have attended Canada Soccer’s professional soccer competition from coast to coast.

The 2019 Battle of the North has featured 13 teams from five leagues across five-rounds since the competition kicked off on 15 May.  The final four teams represent Major League Soccer (MLS), United Soccer League (USL) and the Canadian Premier League (CPL) as they enter the Semi-Final and Final rounds to complete the largest and longest Canadian Championship to date.  With Qualification Round 3 now complete and 20 of 24 matches played in the 12th edition of the Canadian Championship, an all-time attendance of over one million for the competition has been reached.