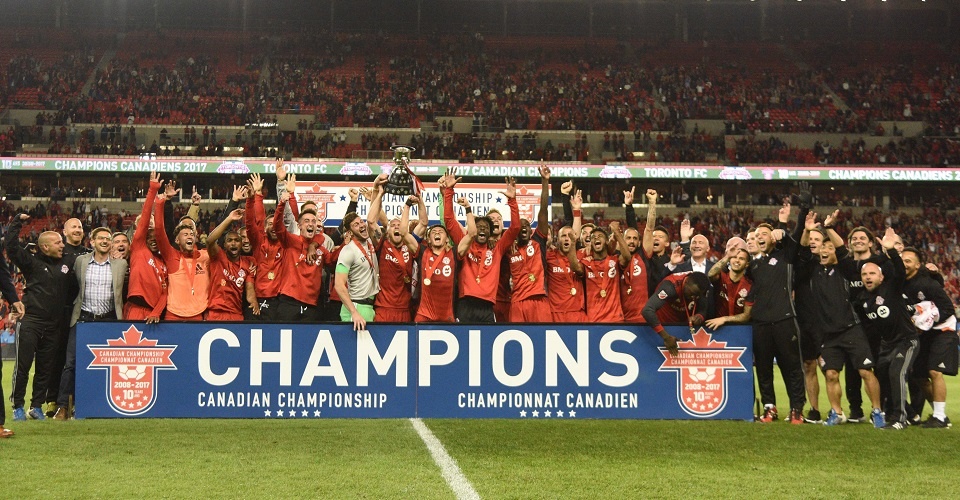 Toronto FC hoisted the Voyageurs Cup and earned its spot in the CONCACAF Champions League with a 2-1 win over the Montreal Impact at BMO Field. Sebastian Giovinco scored twice for Toronto, and Ballou Tabla scored for Montreal.

Coming off a 1-1 draw in Montreal in the first leg, the Impact needed a goal to stay competitive in the aggregate two-match final.  Having given up an away goal, the pressure was on Montreal to stave off an attacking Toronto FC side, looking to capitalise early on their advantage.

Despite the early onslaught from Toronto FC, including a threatening attack from Canadian International Tossaint Ricketts, who returned from injury to play in the second leg of the final, the Impact held off the offensive pressure, including an incredible save by Brossard, Quebec’s Maxime Crepeau in the 26th minute.

Giovinco tied the game, and final series, 1-1 in the 54th minute. Crepeau had just made a second big save against Giovinco, but under a minute later Giovinco slipped away from the Impact defense and drove the ball past Crepeau low into the corner.

In the dying seconds of the game, Giovinco made magic when he took a beautiful pass from Canadian Raheem Edwards and slipped the ball past Crepeau to win the match.

“It was an important win, because we were playing in front of our fans,” said Giovinco after the match. “It was a perfect ball, and a perfect score, so it’s good.”

With the introduction of the Canadian Content rule for the 10th anniversary, six Canadians started in the 2017 Canadian Championship. Edwards, Osorio and Ricketts started for Toronto FC, and Tabla, Bernier, and Crepeau for the Montreal Impact.

The 10th edition of the Canadian Championship featured five clubs from across three professional leagues: Vancouver Whitecaps FC (MLS), FC Edmonton (NASL), Toronto FC (MLS), Ottawa Fury FC (USL), and Impact Montréal FC (MLS). Total attendance for the Battle of the North was 100,856 spectators over eight matches with the final match played before a record crowd of 26,539 at BMO Field.

“It’s been a fantastic 10th anniversary competition, and a great way to end this one,” said Peter Montopoli, Canada Soccer General Secretary. “This is the largest crowd we’ve ever had at a Canadian Championship, and the largest over the eight matches, so we are proud of that and excited to be expanding it next year.  We want to turn it into what it should be, a Canadian tournament contested across the country.”

Toronto FC’s Sebastian Giovinco won the 2017 George Gross Memorial Trophy as the Most Valuable Player of the 2017 Canadian Championship. Giovinco’s two goals in the second leg of the final made all the difference for Toronto FC.

The Battle of the North remains the only path for Canadian clubs to reach international competition, as the conduit to the CONCACAF Champions League and the FIFA Club World Cup, one of the most distinguished club level trophies in soccer which pits the winners of CONCACAF Champions League against the winners of the five other continental championships.  Since 2008, three Canadian winners have reached the Quarter-final stage or further in CONCACAF Champions League: Toronto FC once (Semi-finals in 2011-12), Impact Montréal FC twice (Quarter-finals in 2008-09 and Grand Final in 2014-15), and Vancouver Whitecaps FC (Semi-finals 2016-17).

Fans are encouraged to relive the action through @CanadaSoccerEN on Twitter using #canChamp, or visit our CanadaSoccerTV and Facebook page for highlights, reactions and more.