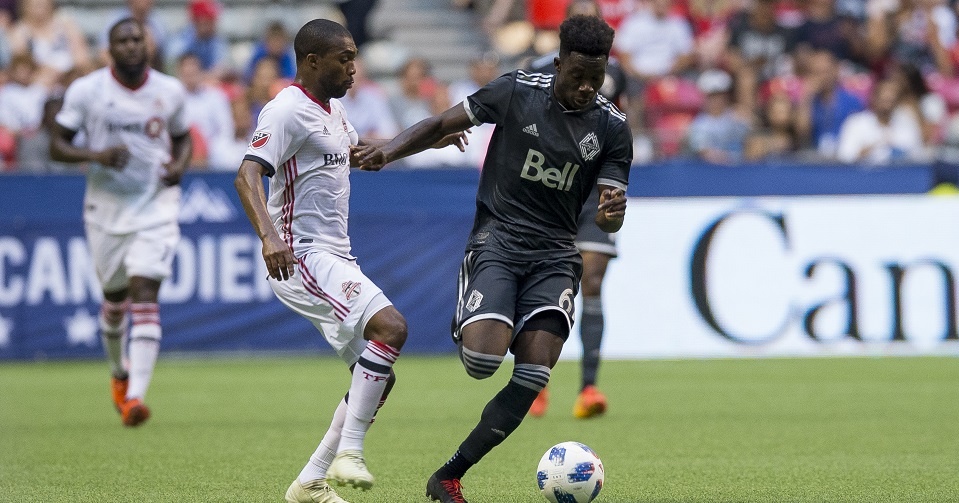 Toronto FC and Vancouver Whitecaps FC even at 2:2 heading into second leg of 2018 Canadian Championship Final Round

Toronto FC and Vancouver Whitecaps FC even at 2:2 heading into second leg of 2018 Canadian Championship Final Round

Vancouver Whitecaps FC and Toronto FC battled to a 2:2 draw in the opening leg of the 2018 Canadian Championship Final Round at BC Place on […]

Vancouver Whitecaps FC and Toronto FC battled to a 2:2 draw in the opening leg of the 2018 Canadian Championship Final Round at BC Place on August 8. The second leg at BMO Field kicks off at 19:45 ET on Aug 15 and will be LIVE on TSN1, TSN4, RDS2 and TSNGo.

Despite going down to ten men in first half added time, Vancouver led 2:1 until Doneil Henry’s misplaced header deep into stoppage time gave Toronto FC an all important second away goal. Kei Kamara’s kick from the spot opened the scoring for Vancouver after Toronto FC’s Tosaint Ricketts handled the ball in the box on a corner kick in the 24’.

“I thought our performance was absolutely terrific especially in the second half where we showed unbelievable character, unbelievable discipline and I’m disappointed that we only scored one second half goal when our counter attacking was phenomenal,” said Vancouver Whitecaps FC Head Coach Carl Robinson. “The effort and the character shown by that group is unbelievable.”

Toronto equalized just minutes after the penalty when young Canadian Jonathan Osorio volleyed a Marky Delgado cross past Whitecaps GK Marinovic in the 26’.  Despite playing with 10, the Whitecaps took the lead on Erik Hurtado’s 84’ strike and looked poised to head to Toronto with the lead until conceding late.

“The score line is in our favour with two road goals which is a decent road result and we go home with the need to win the game or keep the game in a good position for ourselves,” said Toronto FC Head Coach Greg Vanney. “The vision of the game wasn’t exactly what we envisioned, but, at the end of the day it’s the result that matters when you go home.”

• The Canadian Championship is Canada Soccer’s highest domestic professional soccer competition and it is the sole qualification route for Canadian professional clubs into Concacaf Champions League and onto the FIFA Club World Cup.
• The current champions are Toronto FC who have won the tournament six times.
• Canadian content is a focus of the content and since 2017 competition regulations state that each team must field a minimum of three Canadian starters for each match.
• The Voyageurs Cup has been awarded to the Canadian Championship winner since 2008; created by the Voyageurs Canadian Supporters group, the trophy represents Canadian fans’ commitment to the game in our country.
• The George Gross Memorial Trophy recognizes the Canadian Championship’s most valuable player, with Sebastian Giovinco the reigning winner in 2017; the award is named after the late George Gross, an honoured member of the Canada Soccer Hall of Fame.
• In 2018, the competition will feature six clubs from four different leagues: Vancouver Whitecaps FC, Toronto FC and Impact de Montréal from Major League Soccer (all earn automatic berths to the Semi-finals); Ottawa Fury FC from the United Soccer Leagues (who enter in the Second Qualifying Round); Oakville Blue Devils from League1 Ontario (who enter in the First Qualifying Round); and AS Blainville from the Première ligue de soccer du Québec (who also enter in the First Qualifying Round).
• Since 2008, three Canadian winners have reached the Quarter-final stage or further in Concacaf Champions League: Toronto FC twice (Semi-finals in 2011-12 and Grand Final in 2018); Impact de Montréal twice (Quarter-finals in 2008-09 and Grand Final in 2014-15); and Vancouver Whitecaps FC (Semi-finals in 2016-17).