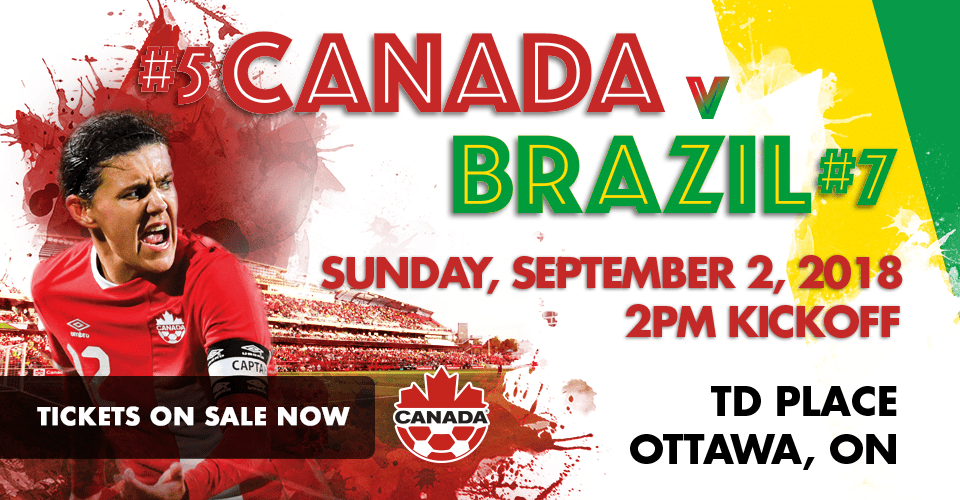 Tickets for the Canada v Brazil Women’s International match in Ottawa on 2 September will go on sale to the public today, 12 July at 10am […]

Tickets for the Canada v Brazil Women’s International match in Ottawa on 2 September will go on sale to the public today, 12 July at 10am ET. Tickets can be purchased via TDPlace.ca, by phone at 613.232.6767, and in-person at the TD Place Box Office. For complete ticket information visit www.canadasoccer.com/tickets.

The highly anticipated match will feature two of the top-ten ranked nations in women’s football as Canada is building towards the FIFA Women’s World Cup France 2019™ qualification campaign set for October at the 2018 Concacaf Women’s Championships. Canada, ranked fifth in the FIFA Women’s World Rankings, will play the 2016 Rio Olympic hosts, ranked seventh, at 2pm ET on Sunday 2 September at TD Place Stadium in Ottawa.

Canada Soccer’s Women’s National Team last match against Brazil saw Canada defeat the home side at Rio 2016 Olympic Games to take the Olympic Bronze Medal. Canada’s back-to-back podium finishes at the London 2012 and Rio 2016 Olympic Games earned them the distinction of becoming the first Canadian team to win back-to-back Summer Olympic medals since 1908, and the first-ever women’s Canadian team to repeat on the podium. Canada also faced Brazil in Toronto and Ottawa ahead of the Rio Olympics, splitting the series 1-1, including Canada’s send-off final match in Ottawa which saw the home team defeat Brazil 1-0, with Janine Beckie scoring in the 90th minute to secure the win in front of 23,588 fans TD Place.

OTTAWA! We are coming back! Tickets for the match at @TD_Place will go on sale to the public Thursday at 10am ET! https://t.co/y1TGGrMnyn #CANWNT pic.twitter.com/JhEaM0RCe7

Ticket Information
Individual tickets to the Canada v Brazil match will go on sale to the public on Thursday 12 July at 10am ET / 7am PT via TDPlace.ca, by phone at 613.232.6767, and in person by visiting the TD Place Box Office. Tickets are available in a variety of price points, starting as low as $20 (plus applicable fees). The launch of ticket sales will be preceded by a 48-hour pre-sale for Canada Soccer Insiders.
Group Ticket Discount Offer
Group discounts (10+ tickets) are available for this match, by organizing a group of 10 or more, fans are eligible to receive a discount of up to 30% off regular priced tickets. To submit a group ticket request, complete the group order form indicating the price point and quantity of tickets you are wishing to purchase here: Group Order Form. Ticket orders will be processed on a first come, first serve basis so organize your group, club, or team today.
Premium Seating
Club Seats at TD Place offer fans a premium match day experience featuring complimentary food and non-alcoholic beverages, access to the exclusive club lounge with two full-service private bars, all from some of the best seats in the venue. Visit TDPlace.ca to purchase club seats.

‘Me+3’ Offer
A special ‘Me+3’ ticket offer is available for this match. By purchasing three tickets in Price Category 3, fans will receive the fourth one free. The ‘Me+3’ ticket packages can be purchased directly via TDPlace.ca at the beginning of public onsale on 12 July.
Canadian Supporters
Canadian Supporter Groups will be allocated dedicated seating in the Southwest corner of TD Place in section W. Information about the Canadian supporter sections will be available via the Voyageurs website www.thevoyageurs.org at a later date. Please note that persistent standing will be permitted in these sections.
For complete ticket information visit www.canadasoccer.com/tickets.

About Canada Soccer
Canada Soccer, in partnership with its membership and its partners, provides leadership in the pursuit of excellence in soccer, both at the national and international levels. Canada Soccer not only strives to lead Canada to victory, but also encourages Canadians to a life-long passion for soccer. For more details on Canada Soccer, visit the official website at canadasoccer.com
For our most recent photographs, please visit our Flickr Photostream.
Canada Soccer’s Women’s National Team
Canada recently made history with back-to-back podium finishes at the London 2012 and Rio 2016 Olympic Games, becoming the first Canadian team to win back-to-back Summer Olympic medals since 1908, and the first-ever women’s Canadian team to return to the podium.