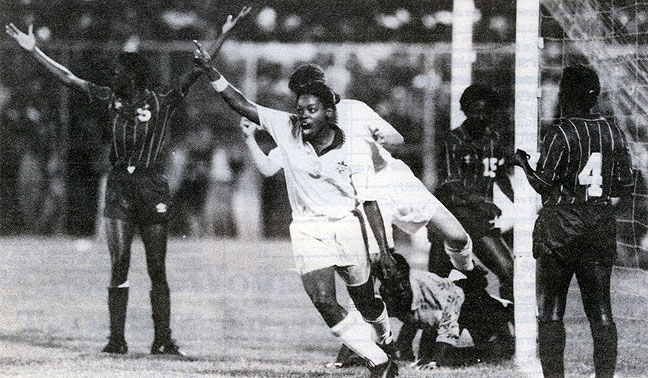 This Day in Football from 16-22 April

This Day in Football from 16-22 April

THIS DAY IN FOOTBALL: 16 April 1989
Canada wins 1:0 over Faroe Islands in an away Men’s International Friendly match in Toshaun. It marks the second time Canada defeats a Europen nation in an international “A” match, albeit the first time ever on European soil.  Drew Ferguson scores the lone goal for Canada.

THIS DAY IN FOOTBALL: 16 April 1990
Canada draws 1:1 with Soviet Union at the Varna Tournament in Bulgaria. Connie Cant scores for Canada. Teenager Angela Kelly makes her debut for Canada.

THIS DAY IN FOOTBALL: 17 April 1991
Canada closes its 17-day Asian tour with a 1:0 victory over Japan in a Men’s U-23 International Friendly in Shisuoka. The tour took Canada through China PR, Korea Republic and Japan. In the victory over Japan, Scott Munson scores the lone goal while Paolo Ceccarelli posts a clean sheet.

THIS DAY IN FOOTBALL: 18 April 1993
Canada wins 3:1 over Honduras in a FIFA World Cup Qualifiers match at Swangard Stadium in Burnaby, BC. Down 0-1 at the half, Canada scores three times to the delight of a sold-out Canadian crowd. After Domenic Mobilio evens the score in the 50th minute, Canada takes the lead on a Honduran own goal (from a Mike Sweeney corner kick) in the 61st minute. Four minutes later, the Honduran goalkeeper is ejected and, after much delay, John Catliff makes it 3-1 on the penalty. Honduras is further reduced to nine men in the final minutes of play.

THIS DAY IN FOOTBALL: 19 April 1996
Canada qualifies for the FIFA U-20 World Cup Malaysia 1997 following a 2:0 win over Costa Rica at the CONCACAF Men’s Under-20 Championship. Steve Kindel scores both goals for Canada. Goalkeeper Taki Vohalis records his third-straight clean sheet of the tournament. Said coach Bruce Twamley, “everyone of them put out 110%.”

THIS DAY IN FOOTBALL: 19 April 2005
Canada draws 1:1 with Netherlands in an away Women’s International Friendly match. Sophie Schmidt, 16, makes her debut for Canada.

THIS DAY IN FOOTBALL: 20 April 1985
Canada wins 2:1 over Guatemala in a FIFA World Cup Qualifiers match in Victoria, BC. Dale Mitchell scores two goals for Canada, the first of which is called ‘one of the greatest goals’ ever seen by coach Tony Waiters. Goalkeeper Paul Dolan stops a penalty kick.

THIS DAY IN FOOTBALL: 20 April 1990
Canada falls 0:2 to China PR at the Varna Women’s Tournament in Bulgaria. Janine Wood makes her debut for Canada.

THIS DAY IN FOOTBALL: 21 April 1990
Canada wins 5:0 over the Soviet Union to finish third at the 1990 Varna Tournament in Bulgaria. Geraldine Donnelly scores three goals in the second half. Angela Kelly and Cathy Ross also score for Canada. For combining outstanding play and gracefulness in the tournament, Janine (Wood) Helland is awarded the Ms. Football Trophy for the Varna Tournament.

THIS DAY IN FOOTBALL: 21 April 1991
Canada wins 2:0 over Haiti in an away FIFA Women’s World Cup Qualifier match in Port-au-Prince. Charmaine Hooper and Lydia Vamos score for Canada.

THIS DAY IN FOOTBALL: 21 April 2005
Canada falls 1:3 to Germany in an away Women’s International Friendly match in Osnabrück. Andrea Neil becomes the second player to make her 100th appearance for Canada. Jodi-Ann Robinson, 16, makes her debut for Canada as a substitute in the last few minutes of the match.