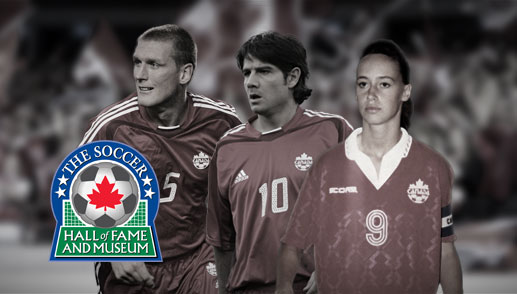 The Soccer Hall of Fame announced today its list of 2013 inductees: three Players, three Builders, a Pioneer, a Team of Distinction and an Organization of Distinction. The Soccer Hall of Fame Induction Ceremonies will take place on the 1-2 June weekend in Toronto, including a special recognition around Canada’s Women’s National Team match against the USA set for Sunday 2 June at BMO Field.

Footballers Paul Peschisolido, Jason DeVos and Janine Helland, as well as Builders Kevin Muldoon, Bill Gilhespy and Alex Hylan have been named to the 2013 Induction Class.

Also to be recognized this summer are Pioneer Award winners Roland, Paul Emile and Marcel Castonguay (all bothers), Canada’s 1984 Men’s Olympic Team for the Team of Distinction, and Vancouver Columbus FC for the Organization of Distinction.

Paul Peschisolido came to prominence during the FIFA Under-16 World Tournament in 1987 and went on to play 53 times for Canada. He was a member of Canada’s CONCACAF Gold Cup winning team in 2000. Paul began his professional career in the old Canadian Soccer League with the Toronto Blizzard in 1989. When the league folded in 1992, Paul had a trial with English First Division club Birmingham City and was quickly signed. During the 1992-93 season he played in 19 games and scored 7 goals and the following season scored 9 goals in 24 games. During his English pro career he played for Stoke City, West Bromwich Albion, Fulham, Queens Park Rangers, Sheffield United, Norwich City, Derby County and Luton Town. Altogether he played 447 games in England’s Football Leagues and scored 118 goals.

Jason DeVos played 49 times for Canada and captained the team that won the CONCACAF Gold Cup in 2000. He began his professional career in the old Canadian Soccer League with the London Lazers in 1990. When the league folded in 1992, he moved to Montreal to play for the Impact in the American Professional Soccer League appearing in 55 games before crossing the Atlantic to play for Darlington, then joining Dundee United of the Scottish League. His next stop was Wigan Athletic where he captained the team to the Nationwide Second Division championship in the 2002-03 season. In total Jason played a total of 398 games and scored 32 goals in the English Leagues before retiring with Ipswich Town at the end of the 2007-2008 season. Following his retirement as a player he became an analyst on soccer telecasts with CBC and GOL-TV and is now an analyst with TSN.

Janine Helland played 47 times for Canada and was a member of the FIFA Women’s World Cup team at Sweden 1995 and USA 1999. In 1995 in Sweden she played in the centre of the defence against England, Nigeria and Norway; in 1999 in the United States against Japan, Norway and Russia. At the University of Alberta, she won the 1989 Gladys Bean Memorial Trophy CIAU national title with the Pandas; with her club the Edmonton Angels, she won the Jubilee Trophy national title in 1995 and 1999. She also won a silver medal in two CONCACAF championships and was a two-time runner up as Women’s Player of the Year. After her retirement she coached and led the Edmonton Aviators in the W-League for one season.

No individual or professional staff member in Canadian soccer history has been involved with as many Canadian Men’s and Women’s National Teams, spanning four decades, as Kevin Muldoon. Kevin’s career highlights include, his involvement in the Men’s team at the Quarter-Finals of the 1984 Olympic Games in Los Angeles, the 1986 FIFA Men’s World Cup in Mexico and the 1999 Women’s World Cup in the United States. For 26 consecutive years Kevin was employed by the CSA (1982-2008) in the capacities of National Teams Equipment Manager, National Teams Goalkeeping Coach and on many occasions working as the Team’s Administrator with the younger Canadian National Teams on both the male and female side.

Bill Gilhespy has been involved in soccer at the provincial, national and international levels for over 40 years. He served as President of the Alberta Soccer Association from 1980 to 1984. In 1984 he became a member of the Canadian Soccer Association Executive where he remained until 1997. While at the Canadian Soccer Association he represented Canada as Head of Delegation in many countries in international soccer competitions. Bill also served as Chairman of the National Teams Committee and was a member of the Player Status Commission of CONCACAF. He was inducted into the Edmonton Sports Hall of Fame in 2002 and the Alberta Sports Hall of Fame in 2004.

Alex Hylan began his involvement with soccer in Montreal where he was appointed secretary to the Quebec Minor Soccer Association and continued as a member of the Promotions Committee from 1964-1973. He was a founding member and was involved with the formation of the Canadian Minor Soccer Association in 1969. Established at a meeting held in Toronto on June 1, 1969 the CMSA was formed for the purpose of fostering and developing the game of minor soccer in Canada, he later served as President of the Association in 1972. Following more than 20 years in Quebec he moved to British Columbia where from 1977 to 1988 he became a member of the Executive of the Canadian Soccer Association responsible for Technical Programs.

Roland, Paul Emile and Marcel Castonguay were among the finest players of their era not only in Quebec but across Canada. Roland won the National Championship playing on the wing for Verdun Park in 1934 and went on to star with his brothers Paul Emile and Marcel making up the forward line in the 1939 final. Later that year Paul Emile was offered a trial with Glasgow Celtic but the war intervened. Marcel and Paul Emile played together in the 1948 national final in which Carsteel beat Vancouver St. Andrews to capture the championship. Roland was voted one of the Players of the Half Century by the Canadian Press in 1950.

In 1984, The National Men’s team qualified for the Olympic Games for the first time in our history. The final rounds of Olympic competition were staged in four different venues across the United States and Canada was drawn in a difficult group that included Iraq, Yugoslavia and Cameroon. Canada was faced with the difficult task of beating Cameroon to qualify for the quarter finals. Cameroon were perhaps the finest and most skillful African team of that era, but Canada, on two goals from Dale Mitchell and one from Igor Vrablic, recorded one of its finest victories to win 3-1 before 27,621 fans. Canada was matched up against Brazil in the quarter finals with the game ending in a shoot out resulting in an impressive fifth place finish for the Canadian squad. This team formed the nucleus of the team that qualified for the World Cup for the first time two years later.

Vancouver Columbus F.C. is one of the most successful men’s amateur clubs in Canada having appeared in a record six national finals and won the Canadian Championship four times.

Columbus F.C. won the National Championship in 1964, 1969, 1977, 1978 and were finalists in 1968 and 2007. They have also won the Province Cup, the championship of British Columbia, six times and won the Pacific Coast League Championship a remarkable seven times. Since being formed 58 years ago, Columbus F.C. has produced more Canadian National Team players than any other amateur club in Canada.

The Hall of Fame Induction Banquet will be held at the InterContinental Toronto Centre, 225 Front Street West on Saturday 1 June 2013. For information about tickets to the Induction Banquet, please contact Robyn Caton 905-264-9390 x230 or rcaton@soccer.on.ca.