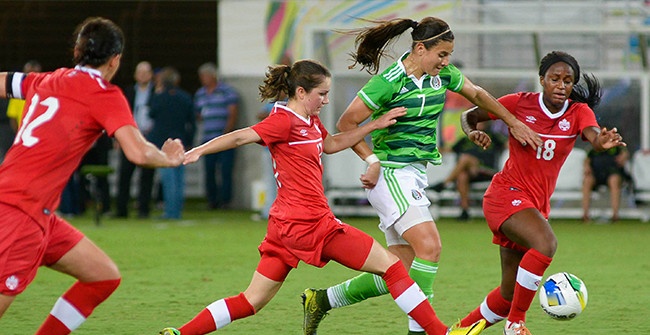 Sinclair’s two goals in 3:0 win over Mexico put her one away from Mia Hamm

Sinclair’s two goals in 3:0 win over Mexico put her one away from Mia Hamm

Canada came out strong against Mexico in the first match of the 2015 International Tournament of Natal at Arenas das Dunas in Brazil, scoring three goals before the half. Two early goals from Captain Christine Sinclair (13’ and 19’) made it Canada’s game to lose, and put her one goal away from tying Mia Hamm (158) as the second all-time scorer in women’s soccer, behind Abby Wambach (184) of the United States.

Sinclair opened scoring with a strike off after the ball came off Kadeisha Buchanan in the 13th minute. It wasn’t long before Canada’s captain found the net again on a cross from Wilkinson in the 19th minute.

Canada’s third goal came in dying seconds of the first half when Nichelle Prince caught a deflection off a Mexican player in front of the Mexico net and popped it up over the goalkeeper, scoring her second goal as an international “A” player in four appearances.

Head Coach John Herdman fielded a blend of experience and youth, including four teenagers, and gave three young players their first international “A” appearances: Gabrielle Carle (17), Deanne Rose (16), and Kennedy Faulknor (16). Jessie Fleming (17) made her 19th appearance, having debut at this competition in Brazil in 2013.

“I am really happy with some parts of the performance,” said Head Coach John Herdman. “That was a top Mexican team, they looked in shape and looked ready to play. I think the fact that we were able to play a couple of sixteen year old’s out there, give them their debuts, it was great. And seeing Nichelle Prince score was fantastic. But importantly, Sinclair doing what Sinclair does, it was nice to see. I think the girls really enjoyed it!”

Herdman’s strategy on the road to the Rio 2016 Olympic Games includes assessing the players throughout this competition. In sticking to his game plan he swapped out six starters for substitutes in the 66th minute en masse.

“This period is about assessing this group. We have to have a look at them across four games and this was only the first,” he said. “There’s still things in there I’m not happy about, but my job here is to give people chances, and they’re all going to get chances, and let’s see how we come through in the next three games.”

“The game had some good parts to it, but there’s definitely elements we need to work on,” she said. “We’re not satisfied with a three nothing win, that’s for sure, but we are happy we fielded some great new Canadian potential and they played extremely well. We need to work on a lot of things, but we haven’t played together for five months, so it’s normal that there’s ebbs and flows in a soccer game.”

Wilkinson, who has made 167 appearances under her boots, saved her praise for her captain. “I can only really speak to Sincy as a person,” she said. “She’s just a wonderful team player and I’m so excited this record is within striking distance for her; no one does more and no one works harder for the team. There are a lot of stars out there that just wait by the net, but if you watch Sincy, she’s back in defense, she’s working hard and she’s always leading… so what an incredible woman – I’m really honoured to play with her.”

Canada’s next match is against Trinidad and Tobago, one of the teams they will face in the group stage of February’s CONCACAF Olympic Qualfying Championship. They face off at Arenas das Dunas on Sunday December 13th at 18.30 local (16.30 ET / 13.30 PT).