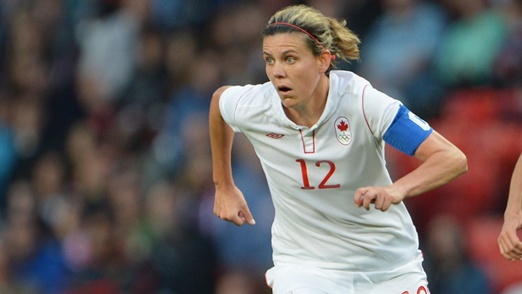 As published on FIFA.com

The eyes are what gives it away: steely determination and an utter resolve to succeed are hardwired into Christine Sinclair’s gaze. The will to win is a critical component of her whole approach to life. And in striving to hit her targets, she always chooses route one, the direct path, on and off the field.

Canada’s star striker again showcased her world-class talent at the Women’s Olympic Football Tournament 2012, finishing top scorer in London on six goals and spearheading the Canucks’ charge to the bronze medal. The 29-year-old is now setting her sights even higher, as she turns those unblinking eyes to the FIFA Women’s World Cup 2015. “The plan is to win the trophy,” she crisply informed FIFA.com.

It is only logical that the Canadians are keen to use the third-place finish in London as the springboard to even greater things, especially as the next global showdown takes place on home soil. Sinclair believes the 2015 event will be the undisputed highlight of her career. “I think we do have a slight advantage in that we’ll play in our home stadiums in front of our home crowd, and we want to make the best possible use of that,” she said. “We and our coach, John Herdman, have just under three years to prepare. I’m confident.”

Sinclair and company have ridden a footballing roller-coaster over the last 15 months. The period started with a surprise group stage exit from the FIFA Women’s World Cup 2011 in Germany, a bitterly disappointing outcome which left the team shrouded in frustration. But that was followed by the dramatic upsurge in form at the 2012 Olympics, where the North Americans were barely recognisable compared to the team of just a few months before. “And we’ve learned from all that. We now know that, at this level, we can’t afford even a single match at less than 100 per cent,” said Sinclair.

Canada’s all-time leader in appearances credits the arrival of Herdman as the main reason for the positive developments of recent months. “We’re a completely different team,” she said. “We were pretty much broken by the last FIFA Women’s World Cup, but John has injected new energy and enthusiasm. He’s infused us with his vision and style. We’re enjoying our football again.” The challenge will be to maintain the current levels of motivation and passion, and even drive them higher in the months leading up to 2015.

“With regards to the next FIFA Women’s World Cup, the entire country will do a magnificent job. Preparations are well underway, and you already sense enthusiasm for the event beginning to grow,” Sinclair reported, a proud smile across her face. “The important thing is that the tournament gives football in Canada a big boost.”

The undisputed figurehead of women’s football in her country, Sinclair believes the game can take a giant stride forward in the months to come. “After the 1999 FIFA Women’s World Cup in USA, our sport became ever more popular there, and that’s exactly what we want for Canada now. Canadians typically only watch football every four years, but we want that gap closed by 2015 at the latest.”

Exciting times ahead
The dynamic and goal-hungry striker is not alone in her high hopes for the future. And naturally, she is convinced that the FIFA Women’s World Cup Canada 2015, a 24-team tournament for the first time, will be a runaway success.

Although the player denies personal stats are of any importance to her, it could be that she sets a world record in front of an adoring home crowd three years from now. Sinclair has 143 international goals to her name, just two off USA star Abby Wambach, who is herself second in the all-time charts to 158-goal legend Mia Hamm.

The months running up to the FIFA Women’s World Cup 2015 in Canada promise to be exciting and packed with action, and Sinclair is sure to be at the heart of it.