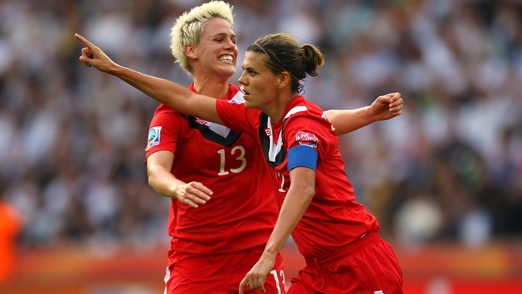 The Canadian Soccer Association announced today that Christine Sinclair is the female selection for the 2011 BMO Canadian Players of the Year award.

Sinclair of Burnaby, BC wins the award for the seventh-consecutive year (every year since the award was re-introduced in 2005). Her 2011 co-winner – Dwayne De Rosario from the men’s national team – was announced on Thursday.

“Christine is a phenomenal leader, player and person and it’s great to see her recognised again in this way,” said Head Coach John Herdman. “To stay consistently at the top of the game and win this award for the seventh consecutive time, it is no easy task. It takes a very special person”.

The highlight from Sinclair’s 2011 international season was a gold medal at the Pan American Games Guadalajara 2011. Down 0-1 late in the championship final, Sinclair scored the equalizer that sent the final to extra time. The match ended in a 1:1 draw, but Canada came away with a gold medal after winning 4-3 on kicks from the penalty mark.

Exactly two months earlier, Sinclair’s club season ended on a similar note, with Western New York Flash winning the championship final on kicks from the penalty mark following a 1:1 draw. In that final, Sinclair scored the opening goal and was later named Championship Most Valuable Player. It marked Sinclair’s second-straight WPS championship (in 2010, she helped FC Gold Pride win the last match of the season).

Of course, perhaps the most memorable moment of Sinclair’s 2011 campaign was a free kick goal she scored against two-time defending champion Germany in the opening match of the FIFA Women’s World Cup Germany 2011. In front of 73,000 German supporters (with a broken nose suffered earlier in the second half), Sinclair curled a perfect free kick over the wall and into the corner of the net.

Another memorable match was Sinclair’s first match back without her protective mask used at the end of Canada’s run at the FIFA Women’s World Cup Germany 2011. With more than 15,000 fans in the stands for a WPS league match, Sinclair scored two goals and one assist in a 3:1 Western New York Flash victory over magicJack.

In 2011, Sinclair’s 12th with the national team, she led the team with eight goals in 20 matches. Sinclair has now led the national team in goal scoring 11 out of 12 seasons. She also became just the fifth player to score her 120th career international goal.

Also in 2011, Sinclair scored 10 goals and eight assists in 15 WPS matches. Sinclair has led the WPS in assists in each of the past two seasons. She is also one of only two players in the league’s three-year history to have scored more than 10 goals in back-to-back seasons (her and teammate Marta).

“As the Bank of Soccer in Canada, we are excited to present the 2011 BMO Canadian Soccer Player Awards and take part in recognizing our nation’s very best in the sport,” said Sandy Bourne, Vice President, Corporate Marketing, BMO Financial Group. “2011 has been a great year for Canadian women’s soccer and we couldn’t be more thrilled to recognize a woman who was instrumental in this achievement. From all of us at BMO Financial Group, I would like to congratulate Christine Sinclair for her demonstrated excellence on the field, both with the national team and with Western New York Flash.”