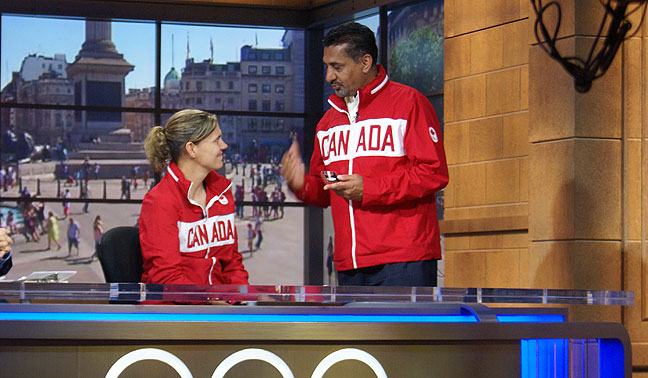 Canadian women’s football captain Christine Sinclair was presented with the Queen Elizabeth II Diamond Jubilee Medal by the Honourable Bal Gosal, Canada’s Minister of State (Sport). The presentation was made during a television interview on Sunday 12 August at the London 2012 International Broadcast Centre. Sinclair had just earlier been named Team Canada’s flag bearer for the London 2012 closing ceremonies.

“The recipients who are honoured by this medal have made Canada better,” said His Excellency Right Honourable David Johnston, Governor General of Canada, earlier this year. “Individually, they have improved the well-being of many in our communities. Together, they have helped to create a smarter, more caring nation. They represent a mosaic of individual experiences and accomplishments. Like Her Majesty, they inspire others to take up the call to service.”

The Queen Elizabeth II Diamond Jubilee Medal was first presented earlier this year on 6 February 2012. During the year of celebrations, 60,000 deserving Canadians will be recognized.

MORE FROM THE GOVERNOR GENERAL OF CANADA

Eligibility criteria
To be eligible for this honour, a person must:

Description of the medal
The obverse depicts a crowned image of the Sovereign, in whose name the medal is bestowed. The reverse marks the sixtieth, or diamond, anniversary of the accession to the Throne of Her Majesty Queen Elizabeth II. The anniversary is expressed by the central diamond shape, by the background composed of a pattern of diamonds, and by the two dates. The Royal Cypher consists of the Royal Crown above the letters EIIR (i.e., Elizabeth II Regina, the latter word meaning Queen in Latin). The maple leaves refer to Canada, while the motto VIVAT REGINA means “Long live The Queen!”

The ribbon uses a new arrangement of the blue, red and white colours found in the 1953 Coronation Medal, the 1977 Silver Jubilee Medal, and the 2002 Golden Jubilee Medal.