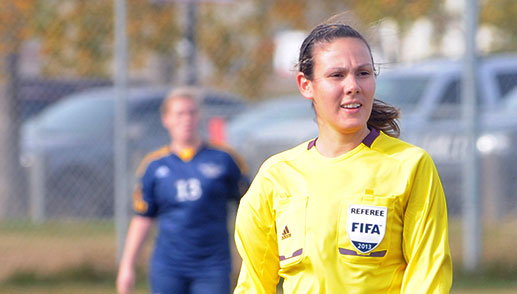 Sheena Dickson has been appointed to the CONCACAF U-17 Women’s Championship, taking place in Montego Bay, Jamaica from 30 October to 9 November 2013. Dickson is one of twelve Canadian referees on the Canadian Soccer Association’s FIFA List and this will be her most important assignment to date.

In order to prepare, Dickson will be arriving in Jamaica early for pre-competition training. She’s excited to be taking part in the tournament, and is looking forward to seeing the “crowd and the feeling of walking onto the pitch while the CONCACAF anthem is playing.”

Dickson is expected to serve as both a match referee and fourth official. It’s going to be a challenge says Dickson. “There are millions of things to focus on, from my assistants to the players, but you can’t focus on one particular thing, because you need to be aware of everything.”

And in Jamaica, language will also be a challenge. “When players don’t speak English you have to rely on body language, which is universal,” says Dickson, “but, ultimately, everyone understands the whistle.”

Despite the challenges, Dickson says that being a match official is a rewarding experience. It has taught her valuable life-skills, improving her communication, time management and understanding of people.

But her success hasn’t come over-night. It has been a long journey and as the CONCACAF U-17 Women’s Championship approaches she’s looking forward “to learning and gaining additional international experience.”

Eight teams will be competing at the tournament, including Canada. The top two teams will qualify for the FIFA U-17 Women’s World Cup Costa Rica 2014.