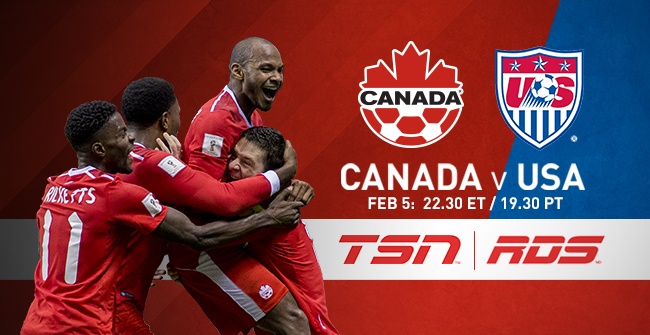 Rivals Canada and USA face each other Friday, February 5 on TSN

Rivals Canada and USA face each other Friday, February 5 on TSN

Canada v USA will be broadcast live on TSN1, TSN3, TSN5, and RDS.

Old rivals Canada and USA will face each other on Friday night in a Men’s International Friendly soccer match just outside Los Angeles. The match will be broadcast live in Canada on TSN1, TSN3, TSN5 and RDS2.

The 5 February 2016 match kicks off at 19.45 local from StubHub Center in Carson, CA, USA. The Canadian broadcast starts at 22.30 ET / 19.30 PT. Across the nation, viewing parties have been organised by Canadian supporters to root for #CanadaRED.

Always a big encounter, the two sides are currently in the midst of 2018 FIFA World Cup Russia Qualifiers which resume in late March. Friday’s match will be the last international test for both sides before match days 3 and 4 in the CONCACAF semi-final round. Canada currently sits in second place in Group A with four points after their first two matches and the USA is in first place in Group C with six points.

“Every day and every camp, for us, it is preparation for the next official game in FIFA World Cup Qualifiers,” said Benito Floro, Canada Soccer’s Men’s National Team Head‎ Coach. “For our players, we want them to play well and to do the things to win the game, to develop those ideal situations.”

This will be the first test against USA for Canada Soccer’s Head Coach Benito Floro (all-time 7W-9D-7L in 23 international matches). In the two previous Canada-USA meetings before Floro’s hiring, the two sides drew 0:0 in 2012 (in Toronto) and 2013 (in Houston).

USA, meanwhile, posted 10 wins, four draws, and six losses in 20 international matches in 2015. USA opened their 2016 international calendar with a 3:2 win over Iceland on 31 January.

Along with watching the match on TSN and RDS, Canadian fans are encouraged to follow the team via Twitter (@CanadaSoccerEN), Instagram (@CanadaSoccer) and Facebook (CanadaSoccer). There will be exclusive in-match updates across Canada’s digital platforms, along with a full recap on CanadaSoccer.com.

Following the February match, Canada will face Mexico in a home-and-away round of Russia 2018 Qualifiers, with the March 25 match at BC Place in Vancouver, BC. With the lower bowl already sold out, Canadian supporters are starting to buy their seats to fill the upper bowl with #CanadaRED support.

Great seats are available in the upper bowl starting as low as $25 (plus applicable fees) and fans are encouraged to act fast to ensure they secure their place as a member of Canada’s 12th man. The popular ‘Me+3’ offer will remain available in select sections, available directly via Tickmaster.ca by selecting the ‘Me+3’ offer.

Group discounts will continue to be offered, with groups of 10 or more eligible to receive discounts of up to 30% off regular priced tickets.

For fans across the country, both the home March 25 match in Vancouver and the away March 29 match in Mexico will be broadcast on TSN in Canada.