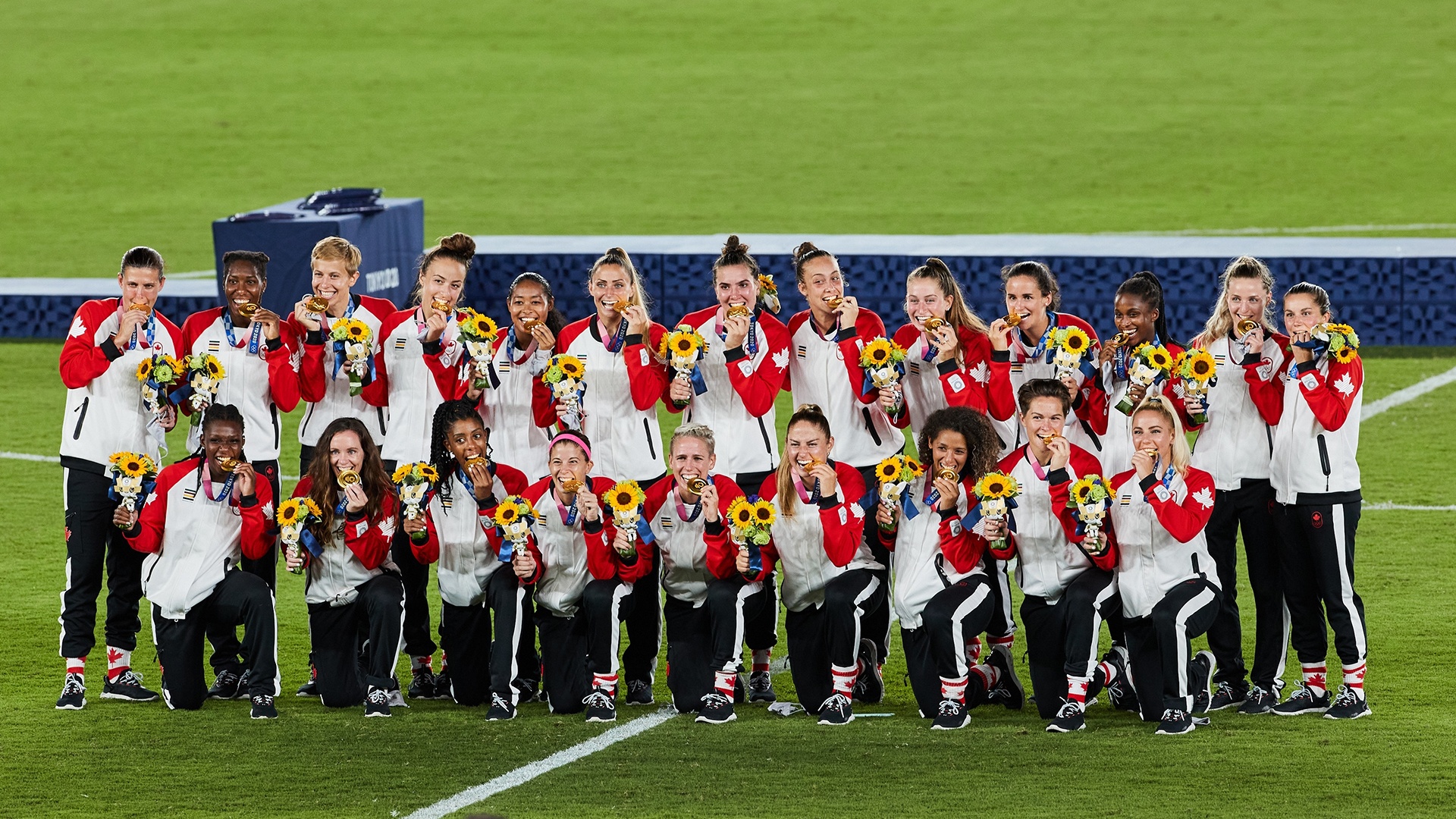 Canada are Olympic champions after winning the Tokyo 2020 Women’s Olympic Football Tournament in Yokohama, Japan. Canada were the 3-2 winners on kicks from the penalty mark after a 1:1 draw with Sweden in the Friday Gold Medal Final at Yokohama Stadium.

Unbeaten across six matches, Canada Soccer achieved their best-ever result at the Olympic Games while also winning their third consecutive medal, thus “changing the colour of their medal” from back-to-back Bronze at London 2012 and Rio 2016 to Gold at Tokyo 2020. This marks the first time that Canada Soccer’s National Teams have won a major world tournament (FIFA World Cup or Olympic Games).

“We wanted to create a moment in Canadian history that can change the game forever,” said Bev Priestman, Canada Soccer’s Women’s National Team Head Coach. “We knew that we were going to get Gold and we were going to do anything in our power to make Canada proud and the players absolutely did that. It went right to the very end, but when this group faces adversity, they step up.”

It was the first-ever Women’s Olympic Football Tournament Final decided on kicks from the penalty mark after Sweden’s Stina Blackstenius (35’) and Canada’s Jessie Fleming (67’) exchanged goals in the first and second half. After extra time, Canada scored on three of their six kicks while Sweden scored on just two. Canada goalkeeper Stephanie Labbé made two saves while Fleming, Deanne Rose and Julia Grosso scored for Canada.

Labbé became the first Canadian goalkeeper to twice make two saves on kicks from the penalty mark in the same competition, having also eliminated Brazil in the Quarter-finals after a 0:0 draw. Canada reached the Olympic Gold Medal Final with a historic 1:0 win over USA in the Semi-Finals on a goal by Fleming.

This was the sixth head-to-head meeting between Canada and Sweden in a major international tournament since 1988, with Canada coming out on top for the first time at Tokyo 2020. Sweden previously eliminated Canada at major tournaments in 1988 (Quarter-finals), 2003 (Semi-finals), and 2019 (Round of 16). Sweden also won a group stage match at Beijing 2008 while the two sides drew 2:2 in the group stage at London 2012.

Canada were already the first Canadian team to win back-to-back medals at the Summer Olympic Games in more than a century and is now the only traditional team sport to accomplish the feat at three consecutive Olympic Games. There are only three nations in women’s football that have been on the Olympic podium on three occasions with Canada joining Germany and the USA. All three nations also boast the largest number of female registered players in the world.

Also of note, Bev Priestman was the only female Head Coach leading their team to the Semi-finals of this year’s Olympic Football Tournaments. The youngest Head Coach at Tokyo 2020, Priestman served as an Assistant Coach when Canada won Bronze at Rio 2016 and previously served as one of the early architects of Canada Soccer’s EXCEL Program which provided a fully-aligned program from Regional EXCEL Centres to Canada Soccer’s Youth National Teams. At the Olympic Games in Japan, Priestman is surrounded by an exceptional staff that features 13 women, the most ever by a Canada Soccer team at a major international competition.

“With you this group of players, deep down I think the whole lot of them have done it for Christine Sinclair to get that Gold Medal that she truly deserves,” said Priestman. “She’s a special human being. She shows the values of Canadians – humility. She does anything it takes to make her country proud and she deserves this special moment.”

“I’m so proud of this team because we had a goal to change the colour of the medal and we landed on the top of the podium,” said Canada captain Christine Sinclair. “We didn’t make it easy on ourselves, but we fought and clawed and scratched our way to the top. It’s an honour to be a part of this group.”

“This team has worked so hard for this, but we set our minds to it,” said Canada goalkeeper Stephanie Labbé who made two saves in the kicks from the penalty mark. “The past two years have been incredibly challenging for so many people around the world. This is just a big props to all the hard work that this team has put in behind the scenes on those hard days when you don’t want to get up or you don’t want to get that workout in.”

“This is a surreal feeling,” said Canada midfielder Julia Grosso who took the last kick of the match. “I’m so proud of this team. We worked so hard day in and day out. It’s the best feeling in the world and I’ve never felt like that in my whole life. It’s something that I will remember forever.”

“To be a part of this group now standing on the top of the podium honestly I never thought I’d be part of that group,” said Sinclair. “I thought that Canada was capable of it at some point, but it happened fast. We won three Olympic medals after John (Herdman) came in and changed everything for us. He changed the trajectory of the program and I think a lot is owed to him.”

CANADA 1:1 SWEDEN / CANADA 3-2 on KICKS:
Canada opened the game under pressure from Sweden who earned a corner in the 2’. Labbé strongly stepped out to punch the ensuing corner away from danger. Janine Beckie’s ball through to Nichelle Prince was dangerous in the 4’ but the Swedes were able to block the attempt. Prince did get played through just two minutes later and swung the ball into the box for Beckie whose shot was cleared for a corner. Beckie’s corner was onto the head of Vanessa Giles in the 7’ but her attempt was wide of goal. Sweden had a chance in the 10’ that went across the mouth of goal and out for a goal kick. Captain Christine Sinclair showed her commitment throughout the first half, tracking back and making numerous important tackles.

Canada had their best chance of the first half in the 21’ on Quinn’s patented ball over the top to Prince, allowing her to play the ball to the back post to Beckie who thought she was offside and let the ball go out of play.

After Beckie picked up a yellow card in the 27’, Labbé made a great diving save in the 29’.

Sweden then scored the opening goal in the 35’. Kosovare Asllani provided the cross from the right and, on her deflected ball across the box, Blackstenius beat the diving Labbé with her shot.

Canada started the second half with two substitutions bringing on Adriana Leon and Julia Grosso. Prince was causing problems for Sweden early earning a chance in the 47’ and again in the 50’ when she got to the goal line and pulled the ball across goal, but Sweden were able to clear for a corner. On the ensuing corner, Grosso took a shot off the deflection that looked to bend but rose late and went over the bar.

Jessie Fleming was key through long spells in the second half, causing problems for Sweden when they were on the ball breaking up a key spell of attacking organisation from the Swedes in the 55’ and making a key tackle in the box in the 62’. Just after Deanne Rose came in for Prince in the 63’, Sinclair was taken down in the box and a penalty was awarded in the 66’ after a review by the Video Assistant Referee and then Referee Anastasia Pustovoitova.

Fleming scored the 1-1 equaliser with her right-footed penalty that beat Swedish goalkeeper Hedvig Lindahl. Of note, Fleming became just the third Canadian to score on penalty kicks in back-to-back competitive matches after Charmaine Hooper in 2000 and Christine Sinclair in 2012.

Vanessa Gilles’ defensive interventions and Ashley Lawrence’s marauding runs were the story of the end of the second half. Gilles made a key clearance under pressure from Sweden in the 82’. Then four minutes into added time, Fleming’s shot from 20 yards out landed on top of the Swedish goal.

Canada’s best chance in the second period of extra time came after Rose had her boot stomped wide in the 112’, but she kept going and swung a ball onto the head of second-half substitute Jordyn Huitema whose attempt was just wide.

On kicks from the penalty mark, Asllani hit the post on the first kick and Fleming gave Canada a 1-0 lead. Sweden took a 2-1 lead on goals by Nathalie Björn and Olivia Schough while Lawrence’s kick was saved and Gilles’ kick hit the crossbar. The next two kicks by Anna Anvegård and Adriana Leon were both saved, then Caroline Seger missed an opportunity to win gold when her kick sailed over the crossbar. After Deanne Rose equalised 2-2 and Labbé saved Jonna Andersson’s attempt, Grosso scored the Olympic-winning kick with a left-footed shot that goalkeeper Lindahl could only get a hand on before the ball hit the back of the net.

For the Olympic Gold Medal Final, Canada’s starting XI featured Stephanie Labbé in goal, Ashley Lawrence at right back, Vanessa Gilles and Kadeisha Buchanan at centre back, Allysha Chapman at left back, and Desiree Scott, Quinn, Jessie Fleming, Christine Sinclair, Janine Beckie and Nichelle Prince from the midfield up through to the attack. In the second half, coach Bev Priestman replaced Quinn with Julia Grosso (46’), Beckie with Adriana Leon (46’), Prince with Deanne Rose (63’), and Sinclair with Jordyn Huitema (86’). In extra time, Priestman replaced Chapman with Jayde Riviere (93’) and Scott with Shelina Zadorsky (120’).