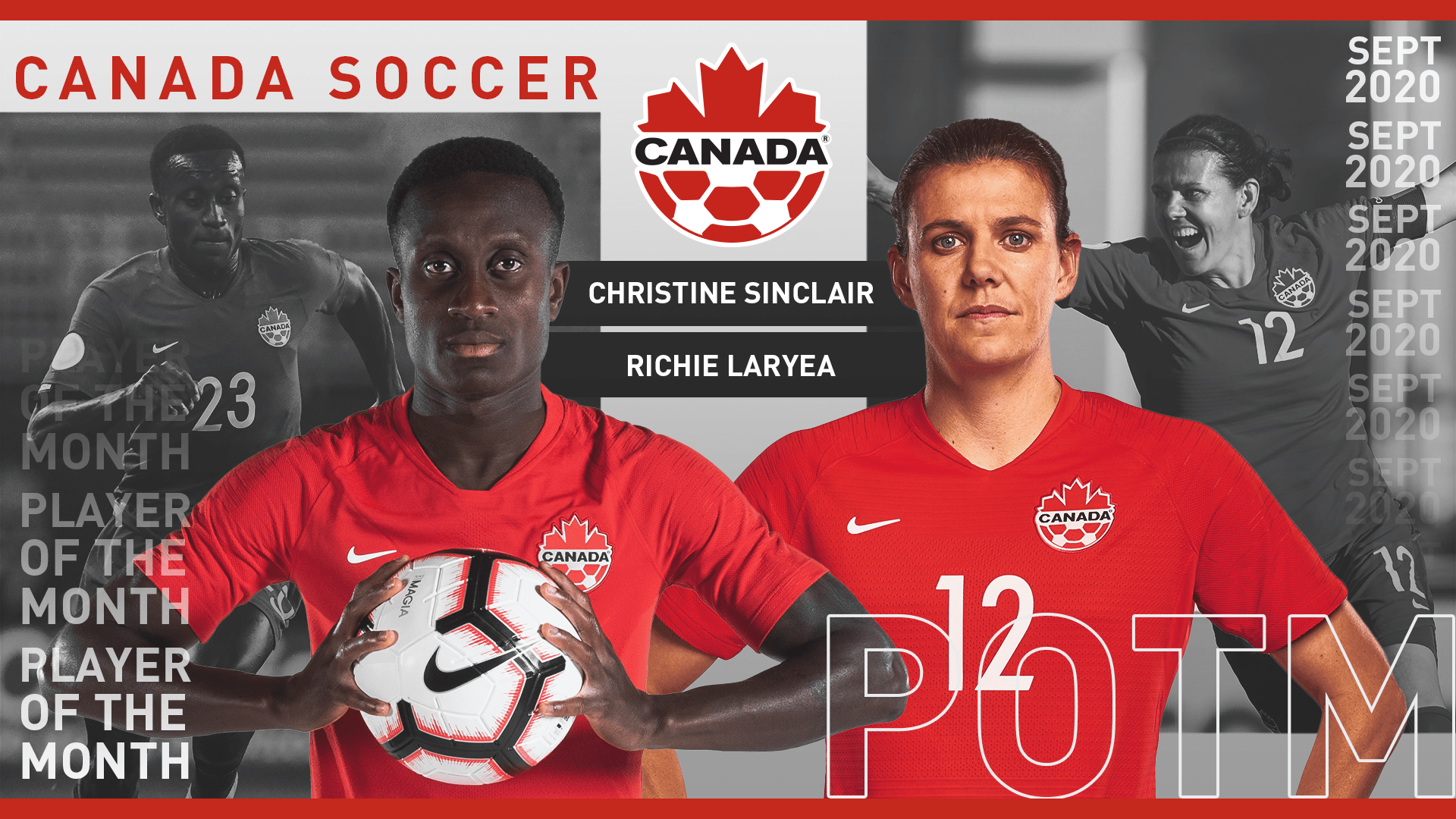 Richie Laryea and Christine Sinclair have been named Canada Soccer’s Players of the Month for September 2020. The two Canadian stars featured prominently for their professional clubs in Major League Soccer (MLS) and the National Women’s Soccer League (NWSL), with both players scoring important goals and keeping their clubs near or at the top of their respective league standings.

Across four matches in September with Laryea in the lineup, Toronto FC posted three wins and a draw as they moved to within two points of first-place Columbus Crew in the MLS standings. In a 2:2 draw with DC United on 19 September, he was part of the build up on Ayo Akinola’s goal in the second half. In an emphatic 3:1 win over Columbus on 27 September, he earned Man of the Match honours after recording an assist and then scoring a highlight-reel goal from inside the box. Laryea’s performance against Columbus earned him MLS Player of the Week honours.

In NWSL action, Sinclair pushed Portland Thorns FC into first place after back-to-back wins in the NWSL Fall Series, a new segment that will feature 18 matches over the course of seven weeks. Captain Sinclair helped Thorns FC win 3:0 over Utah Royals FC and then 4:1 over OL Reign, highlighted by Sinclair’s third career hat trick in the league. In that Wednesday 30 September win, Sinclair opened the scoring on a right-footed blast, made it 2-0 from the penalty spot, and then danced her way past a trio of defenders to make it 4-1 with a left-footed shot from inside the box.

Sinclair has now scored 300 goals across her international and club career at the senior level since 2000, including 55 goals with Thorns FC across all NWSL competitions. This marks the second time this year that Sinclair has won Canada Soccer Player of the Month honours, having previously won the honour for January 2020 after setting the world’s all-time international goalscoring record with her 185th international “A” goal scored at the Concacaf Women’s Olympic Qualifying Championship on 29 January.

Also in the month of September, Alphonso Davies won his fourth and fifth trophies in 2020, lifting the UEFA Super Cup and German DFL-Super Cup less than a week apart. Davies has been part of FC Bayern’s streaks of 23 consecutive wins (16 February to 24 September 2020) and 32 undefeated matches (11 December 2019 to 24 September 2020), which included the 2019-20 Bundesliga title through 27 June, the DFB-Pokal on 4 July, the UEFA Champions League title on 23 August, and UEFA Super Cup title on 24 September (Davies featured in 30 of those 32 matches). He lifted the German DFL-Super Cup on 30 September, including an assist in the FC Bayern 3:2 win over Borussia Dortmund.

In MLS action, Mark-Anthony Kaye scored two goals and had three assists across six matches while Michael Baldisimo, Tajon Buchanan, Lucas Cavallini and Samuel Piette all scored their first MLS goals. In Europe, both Jessie Fleming and Shelina Zadorsky made their FA Women’s Super League debuts while Janine Beckie helped Manchester City FC reach the semi-finals of the FA Cup. From Scotland, Scott Arfield scored two goals and had three assists in six matches, keeping Rangers FC in first place in the league and helping them reach the playoff round of UEFA Europa League Qualifying.

From the Canadian Premier League Island Games, Forge FC Hamilton won the North Star Shield and also qualified for the 2020 Canadian Championship Final against Toronto FC. In the final, captain Kyle Bekker led Forge FC to a 2:0 victory over HFX Wanderers FC. Player of the Match Molham Babouli assisted on the opening goal by Alexander Achinioti Jönsson and then Maxim Tissot scored late for the 2:0 win. It marked the second year in a row that Forge FC Hamilton won the Canadian Premier League’s North Star Shield.