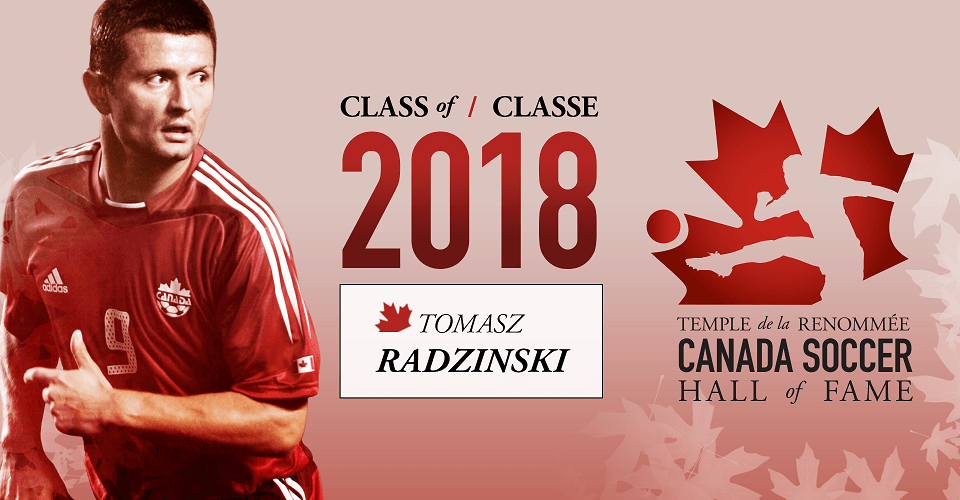 Soccer fans will have the opportunity to celebrate one of Canada’s all-time great strikers at the Canada Soccer Hall of Fame induction ceremony on Tuesday 16 October at BMO Field. Honoured member Tomasz Radzinski will officially be inducted in his hometown of Toronto at Canada Soccer’s upcoming home international soccer match.

Radzinski will be inducted at half time of the Canada home match, with tickets to the event starting as low as $20 (plus applicable fees) via Ticketmaster.ca or by phone at 1.855.985.5000. Group discounts are available by organising a group of 10 or more tickets, giving fans a discount of up to 30% off the regular price. There is also a special Me+3 ticket offer in Price Category 2 which gives fans four tickets for the price of three.

Radzinski is one of two former National Team Players honoured as part of the Canada Soccer Hall of Fame Class of 2018. Candace Chapman was inducted earlier this year at a Women’s National Team home match in Hamilton.

Hey, be sure to catch Tomasz Radzinski’s induction to the Canada Soccer Hall of Fame on October 16 at BMO Field.

SECURE YOUR SEATS on the #RoadTo2022 https://t.co/1srx7FUFNO
: Toronto CAN
: Tuesday 16 October at 7pm
: #CANMNT #CNL pic.twitter.com/MgnxMLNmzQ

TOMASZ RADZINSKI
Tomasz Radzinski was a star forward with Canada Soccer’s Men’s National Team who made more than 500 appearances at the professional level including UEFA Cup and UEFA Champions League. He represented Canada at one Concacaf Gold Cup and in three cycles of FIFA World Cup Qualifiers. He was Canada Soccer’s 1998 Canadian Player of the Year and the first Canadian to reach the Round of 16 in UEFA Champions League in 2000-01.

“I am deeply humbled to be inducted into the Canada Soccer Hall of Fame as part of the Class of 2018 alongside Candace Chapman,” said Tomasz Radzinski. “I would like to thank my teammates and coaches as well as everyone who along the way contributed to making me the best player that I could be.”

At the professional level, he won back-to-back Belgium championships with RSC Anderlecht in 2000 and 2001, also featuring in both UEFA Cup and UEFA Champions League during that run. He was also the Top Scorer in Belgium in 2000-01. He then moved to England on a then-Canadian record transfer fee where he made close to 200 appearances in the Premier League with Everton and Fulham.

Radzinski played his youth football in Poland, Germany, and Canada, joining the North York Rockets as a teenager in the Canadian Soccer League. After playing for St. Catharines Wolves, he played in Belgium with Germinal Ekeren and RSC Anderlecht, in England with Everton and Fulham, in Greece with Skoda Xanthi, and again in Belgium with Lierse SK and then Waasland-Beveren in 2012. For Canada, he made 46 international “A” appearances from 1995 to 2009, scoring 10 goals and recording eight assists.

“Playing professional soccer was a dream come true for me. Playing my favourite sport enabled me to discover the world with my clubs and, most notably, with the Men’s National Team. I am sure most players would agree that representing one’s country at the highest level always feels like an incomparable honour.”

CANADA SOCCER HALL of FAME
The Canada Soccer Hall of Fame celebrates the individual and team achievements and traditions  in the game of soccer in Canada. Including the Class of 2018, the Canada Soccer Hall of Fame has welcomed 114 players, 13 managers/coaches, 10 officials, and 40 builders as honoured members since 2000. Honoured members, by their achievements and passion, have made a positive impact to soccer in Canada and have left a legacy for the sport in our country and around the world.

The Canada Soccer Hall of Fame recognizes the contributions of soccer to the athletic and cultural institution in Canada, celebrating achievements and preserving and commemorating the history of our game.