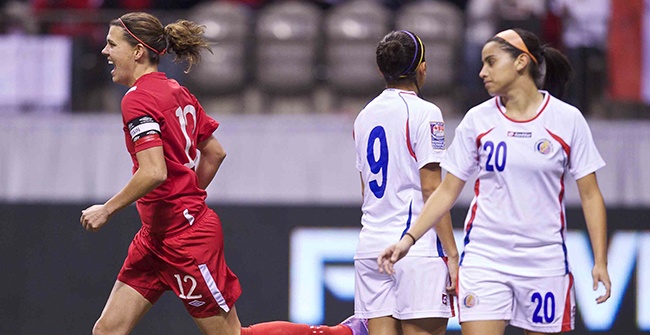 Preview: Canada to play Costa Rica in semi-final with Olympic qualification on the line

Preview: Canada to play Costa Rica in semi-final with Olympic qualification on the line

With a spot at the Rio Olympics on the line, nothing will be left to chance when the teams clash on Friday, February 19th at BBVA Compass Stadium in Houston, Texas.

Canada’s Women’s National Team all important semi-final match at the CONCACAF Women’s Olympic Qualification Tournament against Costa Rica is the game the team has been focusing on and planning for over the past few months. With a spot at the Rio Olympics on the line, nothing will be left to chance when the teams clash on Friday, February 19th at BBVA Compass Stadium in Houston, Texas. (LIVE on Sportsnet ONE 17:15 ET/14:15 PT).

Canada, 11th in FIFA world rankings, has won every match of their group stage without conceding a single goal over three games. However, they know that a tougher challenge is ahead when they face FIFA Women’s World Cup Canada 2015™ participant Costa Rica, currently ranked 34th.

Canada has recent history against Costa Rica, having faced them in the both the 2011 Pan Am Games and in the group stage of the last Olympic qualification tournament in 2012 played in Vancouver at BC Place. Herdman will be looking to capitalise on that experience and build on Canada’s strengths as the team seeks to qualify for Rio.

“I think that winning experience is always a good thing,” said Herdman. “I don’t think Canada have ever been beaten by Costa Rica. In the 2011 Pan Am Games we beat them 3-1 and then we had our best games of the tournament against Costa Rica in the (2012) qualifiers, beating them 5-1. It was a really solid performance from our girls.”

“The (2015) Pan American Games was really fantastic,” said Herdman. “We put our U23 team into that tournament, so a lot of these young players played against them. That was Costa Rica’s FIFA Women’s World Cup squad and it was a very close game. All in all, at times I think we were a better team. Costa Rica scored their goals in transition and on set pieces, so we know they’ve got that threat. There are players here with that experience against Costa Rica, and have the belief that we can do it.”

Herdman has observed an improvement in Costa Rica since Canada’s Women’s National Team last faced them at the 2012 Olympic Qualification tournament.

“They’ve certainly improved, without a doubt,” he said. “Those young players that were there in 2012 have matured into their peak ages. People like Shirley Cruz, who are playing now in the top leagues in Europe, playing Champions League football and Raquel Rodríguez who just got NCAA Player of the Year, so they certainly have got an attacking threat that wasn’t there in 2012. They drew with Brazil in the Women’s World Cup, they got some good results with tight games against quality teams, so we know they’re going to be hard to break down, but they also have that additional attacking threat we haven’t seen in the group stage, so we have to be ready.”

Leaving no stone unturned, Herdman has put months of planning into getting a result in the semi-final, and earning the chance to repeat a podium finish at the Olympics Games.

“We learned a lot last time in Vancouver in 2012, and at the FIFA Women’s World Cup last summer,” he said. “There was some thinking about the way we go through our group stage, bringing real clarity on all of our processes and the way we manage the team. I think we’ve managed them way better. Sinclair played every single game, three games prior to the match against Mexico last time. This time we’ve been able to rest and rotate her. I think the main part of our preparations is just keeping the team together and focused on the one task and it’s to take this team to Rio – and everyone is. “

With so much on the line, expect to see some of Canada’s veteran players on the starting lineup against Costa Rica.

“With someone like Sinclair or Matheson there is nothing they haven’t seen in the game and that gives you a comfort going into a match like this,” said Herdman. “I think the key is a blend of those senior, experienced players that have been in big games, big moments, but also the zest and energy of the new generation of Canadian player with the kind of technical competencies that we didn’t have in the squad four years ago.”

For midfielder Sophie Schmidt, the semi-final is the match she has been looking forward to most.

“I think it’s just the competitive nature of the game,” she said. “Everybody wants to win. I think it’s going to be a tough fought battle and I think those are the games that as a professional athlete you love the most because that’s when the pressure is on, it counts, it matters, and you’re playing for something big.”