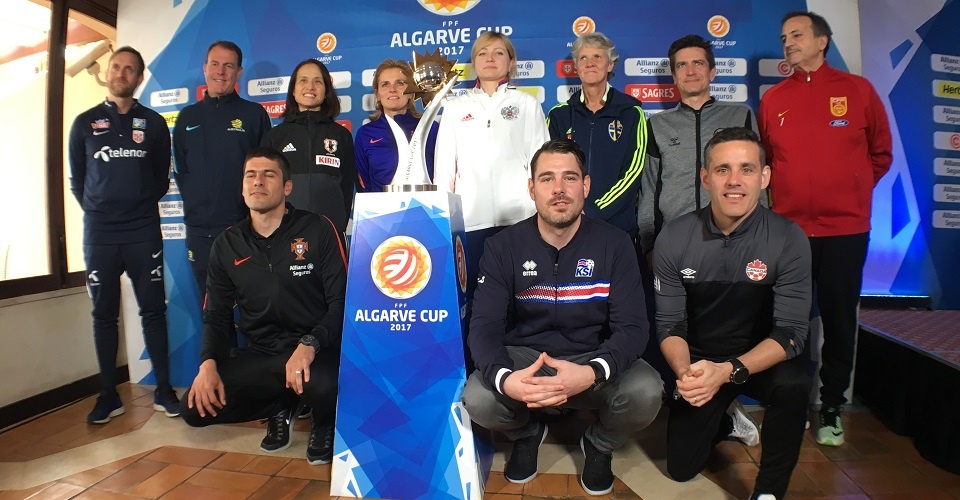 Canada Soccer’s Women’s National Team begins its bid to repeat as Algarve Cup champions when they take on Denmark 1 March in Lagos, Portugal. Canada won the 2016 edition despite losing 0-1 to Denmark in its opening match, with victories over Belgium 1-0 and Iceland 1-0, ultimately defeating Brazil 2-1 in the final
The 2017 XXIV Algarve Women’s Cup features 12 nations broken out into three groups, with Canada facing Denmark, Portugal and Russia in Group 1. Group 2 consists of Iceland, Japan, Norway and Spain; while Group 3 consists of Australia, China PR, Netherlands and Sweden.
Heading into the opening match, Head Coach John Herdman is expecting Denmark to be the most difficult team in Canada’s group.
“Denmark is currently preparing for the Euro’s and they are just about to peak for that tournament, so it will be a really tough test for us,” said Herdman at Canada’s final training session before the opening match. “We lost to Denmark in the opening match of the Algarve Cup last year, and often a tournament is decided on the first game when you play a strong team like Denmark, so this is going to be a tough match.”
Canada continues group play action against Russia 3 March, and tournament host Portugal 6 March.
“Russia and Portugal are similar in their styles: counter-attacking teams that rely heavily on good defensive organisation, so they’ll both be tough to breakdown and we’ll have to be vigilant in looking out for transitions,” said Herdman. “I expect we will have quite a bit of the ball, but we have to make sure that when we lose it, we are quick to get compact and ensure they don’t steal a win from us.”
With Canada looking to secure a spot in the final and a chance to defend its Algarve Cup title, Herdman is already looking at potential opponents from the other groups.
“I don’t think you can take any team here lightly. With the way these teams are organised, the level of coaching and the tactical approach, it’s guaranteed that every game in this tournament will be tough,” Herdman said. “They are all going to be organised, they are all going to be defensively sound and they all have threats up front, so if we get through to the final we are sure to see a very difficult match.”
Canada’s opening match takes place at 18:30 local (13:30 ET/10:30 PT). Fans can follow all the action on Facebook, Twitter and Instagram through highlights, photos and videos.