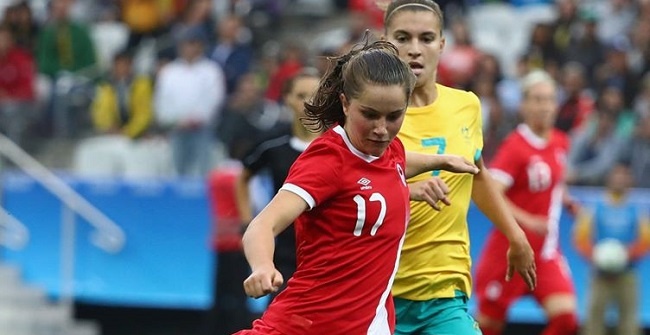 Coming off a dramatic 2:0 win over Australia in Canada’s opening match of the Rio 2016 Women’s Olympic Football Tournament, Head Coach John Herdman’s youthful Canadian team is certain to be looking for a decisive win against Olympic newcomer Zimbabwe.

“This Zimbabwe team has achieved something great for its nation,” said Canada’s Head Coach John Herdman. “Qualifying out of Africa is never easy, and we won’t be taking anything for granted when we face them. They are a little bit of a wild card – they scored on Germany in their opening match – but this is a crucial match for us to gain qualification to the quarterfinals, so it’s just about taking care of business.”

The Canada-Zimbabwe match will be broadcast live on Canada’s Olympic Network CBC TV and Radio-Canada starting at 14.00 ET / 11.00 PT (15.00 local). It will also be streamed via CBC’s App for Rio2016 in French and English (available for download for iOS and Android).

“We have a saying within our team: if you’re good enough, you’re old enough and this is a very young team who are showing they are good enough to compete with teams ranked higher than us,” said John Herdman about his youthful squad for the Rio 2016 Olympic Games. “Many have been helped on their journey through Canada Soccer’s long term player development program and with the inception of the EXCEL Program four years ago we now have a strong conveyer belt through to the Women’s National Team that equips our youngsters with the tools to truly compete on the international stage.”

Canada, with an average age of 25 years old, blends a mixture of youth with veterans like Christine Sinclair and Diana Matheson, who have long put their mark on Canadian soccer. The make-up of Canada’s side is not a coincidence, but part of a larger plan with Canada Soccer’s Women’s EXCEL Program that was initiated in 2012.

“Consistent world-class performance on the highest stage is reliant on a development system that everybody in soccer believes in and contributes to,” said Herdman. “Canada Soccer Women’s EXCEL Program is helping develop a new Canadian soccer DNA. We have worked hard to establish a new standard for elite player development and now our budding international players are exposed to best-with-best training conditions from the east to the west coast. The programme is still growing and that is what is excites me most – I still don’t think we’ve fully unlocked the potential of this country”

Canada’s player pipeline is getting stronger each year, but 2016 is a particularly important year as Canada plays in the Olympic Games as well as the CONCACAF Girls’ Under-15 Championships, the FIFA U-17 Women’s World Cup, and FIFA U-20 Women’s World Cup.

“Canada Soccer has strengthened the ways we identify and develop the most promising young female athletes and help drive women’s soccer forward,” said Herdman. “These players, and the youth coming through our system, are evidence our pathway is working.”

Canada Soccer Women’s EXCEL Program features four classes that intertwine and feed the conveyer belt towards the Canadian Women’s National Team: the Women’s Regional EXCEL Centres, a licensed year-round program delivering, through the Provincial/Territorial Member Associations and partners, a standardized national curriculum for female players U-13 to U-18; the Women’s National EXCEL Program, presented by Bell, a continuous six-year cycle that brings together U-14 to U-17 and U-18 to U-20 players having demonstrated the ability to meet the highest standards across the Regional EXCEL Centres; EXCELeration, supplemental training for targeted athletes prior to having them join Women’s National Team activities; and a network of recommended schools that are recognized as being committed to the support and delivery of training at EXCEL program standards.