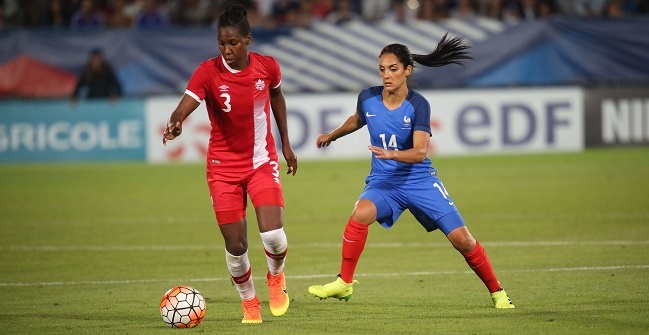 Canada’s Women’s National Team will face France in the Quarterfinal knockout round of the Rio 2016 Olympic Football Tournament 12 August at 19:00 local (18:00 ET/15:00 PT) at Arena Corinthians in Sao Paulo, Brazil. The winner will go on to the Semi-Final and guarantee their team a chance to play for an Olympic medal, and make Olympic football history.

Impressive wins over FIFA Women’s World ranked number five Australia, number ninety-three Zimbabwe and number two Germany in the group stage, Canada was the only team to secure top spot in its Olympic group with a perfect nine points, making history in the process, and earning a berth in the Sao Paulo Quarterfinal match.

“We said all along that we wanted to get back to Sao Paulo, which has been our home stadium here in Brazil,” said Head Coach John Herdman. “The players were excited going into that match against Germany, knowing a win would bring us back here, and they were very clear on what they wanted to do: beat the world’s second best team and make history. We wanted to finish top of the group with nine points – the first Canadian team to do that – and set a high standard for other Canadians that come after us.”

With only 12 teams in the Olympic football tournament Canada knew coming in that it would have to dispatch some tier one talent to make it to the podium. Having defeated Australia and Germany in the group stage, only FIFA Women’s World ranked number three France stands between Canada and a shot at another Olympic medal. Canada’s all-time record against France is 4-5-3.

“France is a world-class team and we know what they are capable of, having played them a few weeks ago in our Olympic preparations,” said Herdman. “That game showed that physically, mentally and technically we are ready. France is the third best team in the world and that’s clear from the recent results they’ve had, but this is a Canadian team that is very gritty and one with a great spirit.”

From London to Rio

Canada’s Women’s National Team’s Road to Rio started four years ago after it captured the hearts of Canadians in London 2012. Through a quadrennial plan that included a commitment to ensuring Canada played tier one teams on a routine basis, Canada has prepared to face the best in the world by testing itself against the best on home soil and abroad, and benefited from being the host country for the FIFA Women’s World Cup Canada 2015™.

“Canada Soccer worked hard to bring great football to Canada after London 2012,” said Herdman. “It brought the USA to Canada for our big 2012 re-match game, as well as the Japanese, the Brazilians, and the Germans. And no one can forget the FIFA Women’s World Cup last year. Canada Soccer have done everything they can to ensure we are playing tier one talent and to keep promoting the game and making it visible.”

In addition to matches in Canada, the Women’s National Team has played in several key international matches and tournaments in the lead up to Rio, including March’s Algarve Cup that saw Canada defeat Brazil in the final.

The four-year cycle concludes in Rio and by all signals Canada’s preparations are already paying off. Coming off a win against Germany, a team Canada had faced 12 times without registering a result, is evidence the plan to face the best has raised Canada into the ranks of real podium challengers.

“We’ve seen an increased interest in our sport and in our national team since London,” said Herdman. “That’s been echoed in every city we’ve turned up in, whether it was Winnipeg, Toronto, or Ottawa – we filled the stadium and by filling the stadium you have kids walking around in jerseys with our girls’ names on the back. In any country that you can describe as a football country that’s what you see. It bodes well for this sport, but it is also a testament to this team and the excellence they show each and every time they go out there.”

Echoing her coach’s remarks, Captain Christine Sinclair is pleased with the attention and growth of the women’s game in Canada, and is looking towards even more in the years to come.

“Heading into London, and then the FIFA Women’s World Cup last year, our goal was to inspire – especially the young girls – and I think we’ve done that,” said Captain Christine Sinclair. “I think we are moving in the right direction and we want this program to remain strong and be a powerhouse. So, we need those young girls, the future generations to come through and dream of taking our positions.”

The winner of Friday’s Canada v France match will take on the winner of the Germany v China Quarterfinal taking place in Salvador. The two other Quarterfinals will feature Brazil v Australia and USA v Sweden.