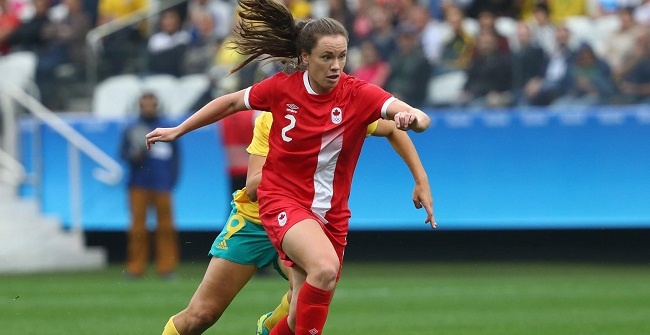 Canada’s Women’s National team is going into it’s third Rio 2016 Olympic group stage match undefeated and already qualified for the Quarterfinal, but to win the group and make history they will need to get past Europe’s top team, Germany, in Brasilia on 9 August.

Canada is sitting at the top of their group coming into the final group stage match with six points, while Germany has four, and Australia one. Olympic newcomer Zimbabwe has yet to register a point.

“We know the quality of the Germans: they are a team that sits second in the world and have been there for a long time,” said Head Coach John Herdman. “I think they could be one of the favourites for this tournament, but they are coming into this match needing to get a result to guarantee their qualification.”

Having already qualified for the Quarterfinal, Canada is in the driver’s seat going into the match, but beating powerhouse Germany is on every player’s bucket list and fans can expect Canada to go out with determination and mettle in match three.

“We have a team that will push hard to finish top of this group and continue making history like we’ve done here,” said Herdman after Canada’s training session in Brasilia. “We have six points but we want to finish with nine, win the group and go back to Sao Paulo which has been our home stadium here in Brazil.”

Herdman’s commitment to give every player on the squad match time was realised against Zimbabwe, so he’ll have a game-ready full roster to select from when he chooses his starting line for Tuesday’s match.

“For us it’s a case of making sure we manage the conditions, which is altitude and heat, and then go out there with a group of women that are going to try and make history by getting Canada’s first result against a German team – whether that be a win or a draw.”