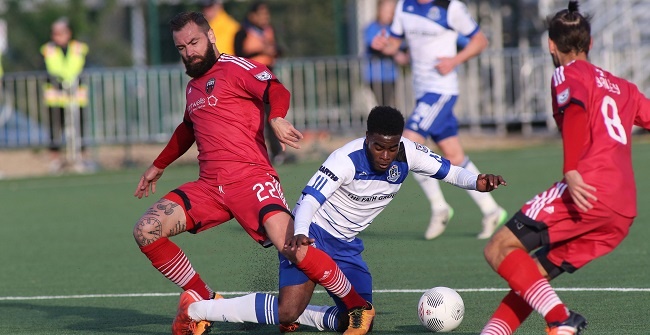 Preliminary round matchup returns to Ottawa for 2nd leg

Preliminary round matchup returns to Ottawa for 2nd leg

The Amway Canadian Championship returns to TD Place in Ottawa with the hometown Ottawa Fury FC holding a 3-0 lead over their NASL rivals FC Edmonton. The second leg on 18 May (KO 7:30 ET) will determine who moves into the semi-final round against Vancouver Whitecaps FC and will be livestreamed at CanadaSoccer.com.

With three away goals, the Fury are in an enviable position coming home. With a win, the team will advance for the first time in their Amway Canadian Championship history after two preliminary round losses to Edmonton in 2015 and 2014. The next round matchup with Vancouver, however, pits the victorious NASL side against MLS club and defending Canadian Champion competition in the Vancouver Whitecaps.

The Amway Canadian Championship is Canada Soccer’s professional competition featuring clubs from Vancouver, Edmonton, Toronto, Ottawa, and Montréal. The national champion lifts the Voyageurs Cup and wins Canada’s lone spot in CONCACAF Champions League on the road to the FIFA Club World Cup. The competition starts with FC Edmonton and Ottawa Fury FC in the preliminary round, with the winner joining Vancouver Whitecaps FC, Toronto FC, and Impact Montréal FC in the semi-final phase on 1 June. TSN is the official broadcast partner of Canada Soccer’s Amway Canadian Championship semi-final and final rounds.