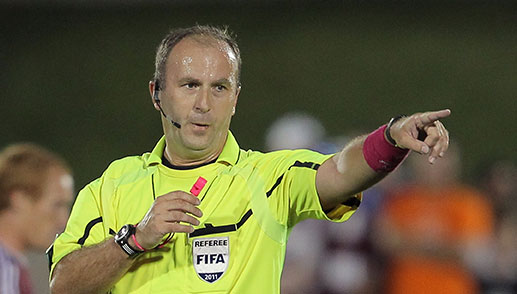 Silviu Petrescu, one of Canada’s most experienced referees, will be retiring from the international stage.

As Chile takes on Brazil in Toronto, as part of an international soccer series, Canadian referee Silviu Petrescu will be calling the shots.

This international friendly, between South American rivals, will be played at Rogers Centre on 19 November 2013 at 20.00 ET. It will be Petrescu’s third time officiating a match featuring Brazil, the five-time world champions and upcoming FIFA World Cup 2014™ hosts.

Petrescu is one of Canada’s most experienced referees and this match will be his last on the international stage. He is standing down because he has reached FIFA’s mandatory retirement age of 45, but remains eligible to officiate national competitions.

In fact, Petrescu plans to continue officiating in MLS, where, in 2012, he was appointed Referee of the Year – the first Canadian to receive this honour. He was also in charge of the 2012 MLS Cup final between the LA Galaxy and Houston Dynamo.

Petrescu credits his father, who was a FIFA referee in Romania, for encouraging him to become an official. “He taught me all the secrets to becoming a better referee,” says Petrescu.

And for those wishing to follow in his footsteps, Petrescu offers this piece of advice: “everything is possible, with hard work and commitment.”

Canada Soccer wishes to thank Petrescu for his international service. “Silviu has shown professionalism both on and off the field,” says Head of Refereeing Tiger Liu. “He is a role-model for the National Referee Program and we thank him for his dedication to Canadian soccer.”

Some of Silviu Petrescu’s Career Highlights