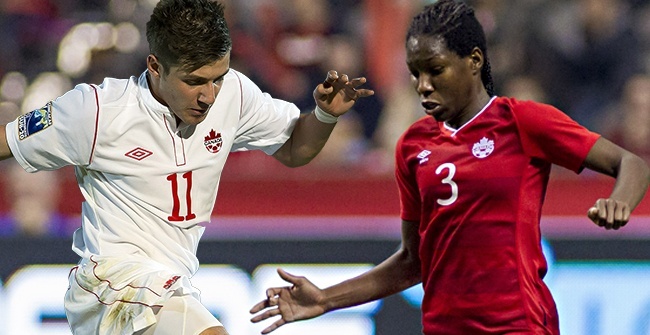 Petrasso, Buchanan named 2014 Canadian U-20 Players of the Year

Petrasso, Buchanan named 2014 Canadian U-20 Players of the Year

The two stars won the honour in a vote shared by national-team coaches (50%) and Canadian clubs and coaches (50%).

Midfielder Michael Petrasso and defender Kadeisha Buchanan have been named Canadian U-20 Players of the Year for the 2014 season. The two stars won the honour in a vote shared by national-team coaches (50%) and Canadian clubs and coaches (50%).

Petrasso, a member of Queens Park Rangers of the Barclay’s Premier League in England, spent time on loan with Oldham Athletic, Coventry City, Leyton Orient, and Notts County in 2014. He also made his first-team debut with QPR in May as QPR gained promotion back to the Premier League. For Canada, Petrasso will be an integral player next year as Canada’s Men’s U-20 Team looks to qualify for the FIFA U-20 World Cup New Zealand 2015. He scored the first Canadian goal in Canada’s recent 2:2 draw with England’s U-20 team.

“Michael has had a very good year turning in terrific performance at loan clubs away from QPR and adds a different dimension for all the others when he joins the national squad,” said Head Coach Rob Gale. “Always fit and with terrific endurance and speed, he shows the others how to be a full 90 minute player. A very worthy winner.”

Buchanan has won her second-straight U-20 Player of the Year as the West Virginia University defender continued to be a revelation at both the U-20 and international ‘A’ level. She played in every game this summer at the FIFA U-20 Women’s World Cup Canada 2014 and despite the fact that she doesn’t turn 20 until next year, Buchanan’s already amassed an astounding 26 appearances at the senior level dating back to her debut in 2013.

“She’s meant just as much to the U-20 group as she’s meant to the senior team. She’s been wonderful at every level she’s played wearing a Canadian jersey,” said Head Coach Andrew Olivieri. “Nobody’s more deserving of that award. She’s spent a whole two years with us. Since she came in she fit in well and had the respect of all her teammates so I don’t think there’s anyone that can question how much she deserves that award.”