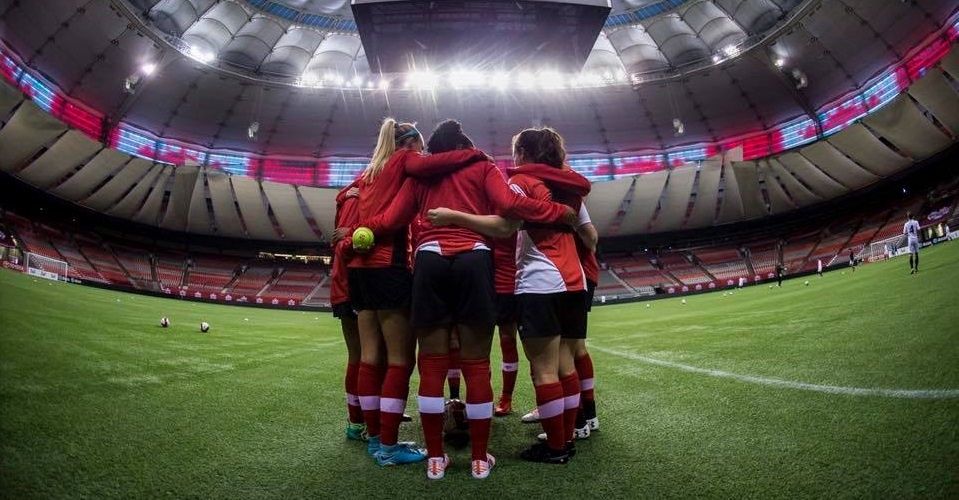 With the Thursday, 9 November Canada v USA derby match at BC Place in Vancouver nearly sold out, expectations are high that the fiercest rivalry in women’s sports will once again be on display before a sea of Canadian fans cheering on the Canadian side.

“This is one of the most notable rivalries in sports,” said Canada Soccer President Steven Reed at a pre-match media conference at BC Place on Tuesday. “In terms of history, Canada and the US are one of the few match-ups that have drawn over 20,000 fans for a friendly match and for Thursday we are expecting a capacity crowd of over 27,000 fans.”

Canada is drawing on the home team fan support to help push it over the edge against a powerful US team who has not been back at BC Place since capturing the FIFA Women’s World Cup Canada 2015™ title two years ago.

“Every time we play the US it’s a battle, and we keep battling, but we just haven’t been able to get the results we want against this team,” said Head Coach John Herdman at the pre-match media conference. “We’re going to need the fans here to stand up with us. There will be some moments when we’ll need to do this together. It’s a passionate Canadian crowd that will give us a little bit of an edge against a monster of a team.”

For veterans Christine Sinclair and Desiree Scott who both captured bronze at the London 2012 Olympics and fought it out with the US in the memorable semi-final match that helped define the rivalry, the game has evolved, but so has the relationship with the US.

“This rivalry is massive,” said Sinclair. “You ask any Canadian about their memories of women’s football and it probably goes back to the Olympics in 2012 or maybe the FIFA Women’s World Cup in 2015. I’ve met a lot of young girls who started to play after watching the semi-final in 2012. Our goal was to leave a legacy, and now I’m playing with a lot of those young girls who started playing after 2012. For those of us who are fortunate to play in the NWSL, we’re teammates with US players and we train together regularly, so we all know each other pretty well. But there is something different when you put on your Canadian shirt and tomorrow our team will be working together to get that win against the US.”

At half time, Canada Soccer will be honouring the careers of three former Canadian Women’s National Team players – Brittany Baxter Timko, Chelsea Stewart, and Kelly Parker – all of whom were members of Canada Soccer’s historic London 2012 Olympic Bronze Medal winning team. Fans attending the match will have the opportunity to meet Brittany, Chelsea and Kelly prior to kick off on the BC Place stadium concourse (Section 216) from 18:15-18:45 PT, courtesy of Bell.

Canada Soccer’s Women’s National Team will travel to San Jose, California for the second leg of the home and away series for the 12 November match at Avaya Stadium.

Canada Soccer has released its top five moments from the Canada v USA rivalry in the lead up to the match, with Herdman’s and player’s reflections on those big five matches that defined the #WNTRivalry. Check out the series on Canada Soccer’s social media profiles on Youtube, Facebook, Twitter, and Instagram.