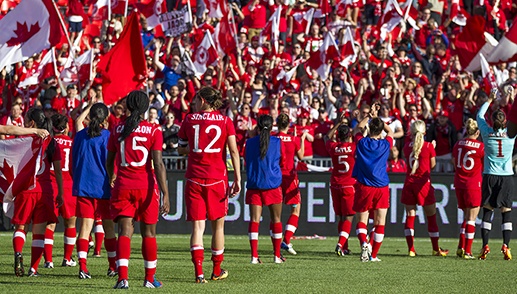 Tickets for the Women’s International Friendly Match between Canada’s Women’s National Team and Korea Republic will go on sale one week from today, on Wednesday 3 July at 10.00 MT (12.00 ET / 9.00 PT). This match, presented by BMO, will be held at Edmonton’s Commonwealth Stadium, Edmonton, AB on 30 October (kickoff 19.00 local).

Fans will be able to purchase tickets online at ticketmaster.ca, by phone at 1-855-985-5000 or in person at all Ticketmaster outlets.

“On the heels of a memorable match day in Toronto in early June, the Canadian Soccer Association is thrilled to bring Canada’s Women’s National Team and Olympic Bronze Medalist out west this fall,” said Peter Montopoli, General Secretary, Canadian Soccer Association. “With tickets accessibly priced, we look forward to making 30 October the family sporting event of the year in Edmonton!”

The Canadian soccer community is also encouraged to take advantage of the group offer (10+) offering discounts ranging from 20%-30% off the regular price, based on volume. Details of this special offer are available at canadasoccer.com/canWNTvKOR or by contacting marketing@canadasoccer.com.

A special family ticket offer will also be available for purchase via Ticketmaster.

For the more exuberant fans, dedicated Canadian Supporters sections will be identified and details on how to purchase tickets in these sections are available at canadasoccer.com/canWNTvKOR.

The Women’s International Friendly contest between Canada and Korea Republic will be a precursor to the FIFA Women’s World Cup Canada 2015 as Canada will play the Opening Match in Edmonton.

Commonwealth Stadium holds the record for the highest-ever attendance at a women’s international fixture in Canada: a crowd of 47,784 attended the final of the FIFA U-20 Women’s World Cup in 2002 between Canada and USA. Edmonton also holds the record for highest home attendance to a Canada WNT game, with 29,953 fans attending a win over Mexico in 2003.