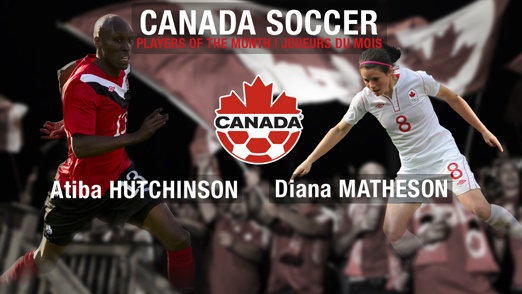 Atiba Hutchinson and Diana Matheson earn top honours for the month of October.

The Canadian Soccer Association is pleased to recognize Atiba Hutchinson and Diana Matheson as the Canada Soccer Players of the Month for October 2012.

In October 2012, Hutchinson helped his club PSV Eindhoven move to within a point of FC Twente Enschede for first place in the Dutch Eredivisie. PSV won all three October league matches, with Hutchinson recording an assist in the 2:1 win over PEC Zwolle on 28 October. In Europa League action, Hutchinson helped PSV pick up four points in two group matches, with the Dutch team currently sitting second in the four-team group after three matches. At the international level, Hutchinson played in two matches for Canada, a win and a loss as Canada missed a spot in the CONCACAF Final Round by just one point.

Hutchinson has spent 10 seasons with Canada’s national team. The 29-year old striker from Brampton, ON originally made his football debut at age four in his hometown. He was 19 years old when he made his debut for Canada on 18 June 2003.

As for Matheson, she helped her club LSK Kvinner FK open a six-point lead in the Norwegian standings after three consecutive wins in the month of October. In those three victories, Matheson scored a goal and two assists. She scored in the 5:0 win over Trondheims-Ørn on 7 October, she was the best player and recorded an assist in the 2:1 win over Røa on 14 October, and then she recorded an assist on a Rhian Wilkinson goal in the 5:1 win over Klepp on 28 October. With only two matches remaining in the season’s campaign, Matheson and LSK Kvinner can wrap up a league championship as early as 3 November.

Matheson is in her 10th season with Canada’s national team. The 28-year old midfielder from Oakville, ON orignally made her football debut as a youngster with Oakville Soccer Club. She was 18 years old when she made her debut for Canada on 18 March 2003. In August of this year, she famously scored the winning goal of Canada’s 1:0 bronze-medal victory at the London 2012 Women’s Olympic Football Tournament.

CANADA SOCCER PLAYERS OF THE MONTH